The fall of a WhatsApp beggar in Dubai 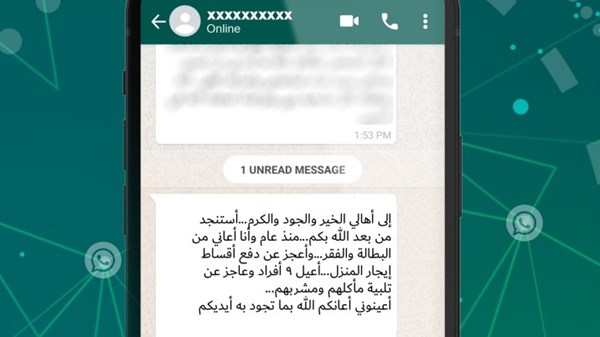 The Dubai Police General Command has arrested a person of Arab nationality who is professing electronic begging by sending fraudulent messages through the “WhatsApp” social media application in which he pleads with his victims to help him and his family in need, stressing the importance of not dealing with and responding to e-mails of beggars.

Colonel Ali Salem, Director of the Infiltrators Department in the General Department of Criminal Investigations and Investigations in Dubai Police, warned against responding to methods of begging through various social media, especially in the holy month of Ramadan, which exploit the month of goodness to commit fraud and fraud by publishing messages, pictures and fabricated videos. For the sympathy of good people and benefactors.

Colonel Ali Salem said: The Dubai Police General Command launched at the beginning of the month of Ramadan its annual awareness campaign under the title “Beggary is a wrong concept of compassion”, which aims to enhance societal awareness of the dangers of begging and maintain community security and stability, in addition to controlling beggars in public places. And it continues throughout the holy month of Ramadan, in cooperation with strategic partners.

He explained that the campaign «beggary is a wrong concept of compassion» is considered one of the successful campaigns that contributed to reducing the number of beggars annually, due to the strict and resolute measures taken against the arrested beggars, indicating that the General Administration of Criminal Investigations and Investigations annually develops an integrated security plan to combat begging, by intensifying Patrols in the places where beggars are expected to be.

Colonel Ali Salem indicated that there are official bodies, organizations and charitable societies that anyone can resort to to seek financial assistance or to obtain a “fasting breakfast” and other needs, pointing out that there are people who justify the reason for their begging for their need for money, and this matter is illegal and is punishable by federal law according to Article No. 5 of 2018 in the matter of combating begging, and they are referred to the judiciary.

He called for not responding to beggars, or dealing with them with feelings of compassion and sympathy for their appearance, and helping the police forces to immediately report any beggars being spotted anywhere on the call center (901) or the police eye service on the Dubai Police smart app, and the E-Crime platform. ) To report cybercrime.

The war for schools: now the national justice orders that classes be suspended in the City

Crisis in Colombia: after a week of protests, pressure grows on Iván Duque