The “extent” of hope for the poor around the world 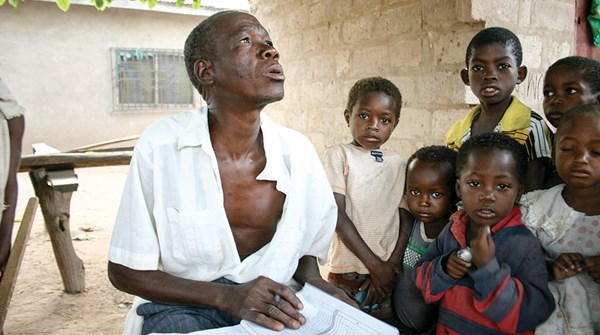 The “Mada” campaign is an initiative to eliminate river blindness and elephantiasis, which are among the main causes of families falling victim to the cycle of poverty because of the suffering they cause to families. More than 200 million people around the world need treatment for river blindness, 99% of them in Africa, while It is estimated that more than 893 million people need treatment for elephantiasis, 43% of whom live in Africa. The estimated cost of elephantiasis caused by disability is approximately $ 1 billion annually.
Neglected tropical diseases such as river blindness and elephantiasis disproportionately affect the world’s poorest people, prolonging the cycle of poverty by creating unemployment for millions of adults and keeping millions of children out of school.

elephantiasis
Known for its advanced stage symptoms, elephantiasis is a mosquito-borne disease caused by parasitic nematodes. Infection usually occurs in childhood, resulting in undetected damage. However, the severely disfiguring effects of chronic muscle fibrosis are greater in adults when they have permanent disability caused by swelling of parts of their bodies. When a mosquito that carries the parasite bites a person, the parasite enters the body and migrates to the lymph vessels, where it develops into an adult worm. The infection causes the lymphatic system to function incorrectly, leading to fluid accumulation and swelling (lymphedema).
Elephantine infection leads to severe swelling of the skin and tissues, usually in the legs and genitals, and to flabby, thick, and sore skin, and the swelling in the legs can be so severe that it affects movement, and it can also contribute to damaging the kidneys internally and changing the body’s immune system.
In addition to physical pain, people with the disease can suffer from an almost non-existent social life, as they may face a poor quality of life and are often unable to work or support their families or be active members of their communities, which leads to psychological and financial losses. Contribute to the cycle of poverty.

River blindness
River blindness is an eye and skin infection caused by parasitic worms, and in 2018, 218 million people needed treatment for river blindness, and most of the burden falls in Africa, according to the World Health Organization. It is transmitted by the repeated sting of black flies that carry the parasite that lives on the banks of fast-flowing rivers and streams.
After trachoma, river blindness is the second leading cause of blindness due to infection and the fourth major cause of preventable blindness. The social and economic burden of this disease extends beyond affected individuals, affecting entire families and communities.
Many people suffer from itchy skin, rashes, skin nodules and poor vision, and if left untreated, severe itching can lead to lesions and bacterial infections, which leads to the skin becoming rough, and vision impairment occurs after years of severe infection. It is usually found in individuals over the age of 30 years.

End the road
The Reaching the Last Mile Fund paves the way to end two neglected tropical diseases (river blindness and elephantiasis). Although NTDs are rare in rich countries, they are always a threat in poor countries, where people suffer more from neglected tropical disease at once. one. These countries face poor access to clean water, limited healthcare services, and climate variability due to climate change – challenges that exacerbate the spread of these diseases while keeping societies trapped in poverty.
The proceeds from the Mada campaign are allocated to the Reaching the Last Mile Fund, which is responsible for ending neglected diseases, prevention and treatment processes in 7 countries in Africa and the Middle East, where river blindness can be eliminated and a brighter future is guaranteed for millions. The Fund for the Elimination of Neglected Diseases will manage the Reaching the Last Mile Fund, which will last for 10 years, with an amount of 10 million dollars, which was launched in 2007 by His Highness Sheikh Mohammed bin Zayed Al Nahyan, Crown Prince of Abu Dhabi and Deputy Supreme Commander of the Armed Forces, and is supported by the Bell Foundation Melinda Gates, USAID, and the Elma Foundation.
It is worth noting that neglected tropical diseases affect the poorest people, and are responsible for 170 thousand preventable deaths, and cause disabilities that perpetuate the cycle of poverty by keeping millions of adults without work and children without education. Despite the availability of effective treatments, communities threatened by NTDs often have difficulty accessing preventive medicines. Meanwhile, limited access to basic clinical care means that the symptoms of neglected tropical disease can persist without treatment, causing catastrophic disabilities such as blindness and disfigurement.

Day of the Electrodependent: the memory of Joaco, the baby who died in 2020 whose case was prompted by the law