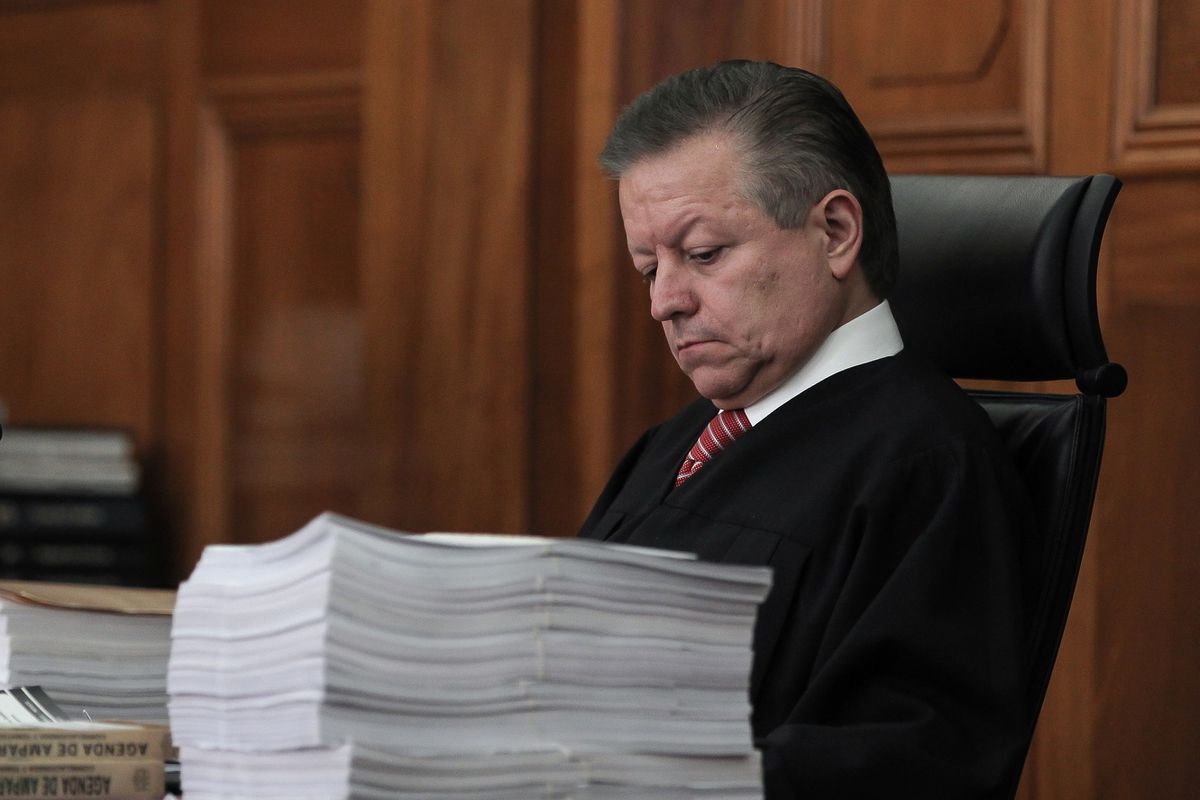 By surprise and at the last minute. Thus this week the Senate approved the extension for two more years of the mandate of Arturo Zaldívar at the head of the Supreme Court of Justice of the Nation. The decision of Morena, the ruling party, and its parliamentary allies has stirred the political debate in what the opposition sees as the latest attempt by President Andrés Manuel López Obrador to subdue the Judiciary and tip the institutional balance in favor of the bloc. ruler. For the bulk of academics in the country, the problem is fundamentally legal. The upper house agreed to the extension of Zaldívar’s term through a transitory article that was not contemplated at the beginning of the discussions of a package of secondary laws and not by reforming the Constitution, as required by law. “It’s nonsense,” says Diego Valadés, from the Legal Research Institute of the National Autonomous University of Mexico. “It is unconstitutional, with no room for nuances or interpretations. Any student in the first semester of the law career would realize it ”, adds the constitutionalist.

The principle that Valadés cites, like other specialists, is that a secondary law cannot contradict what the Constitution says because it has a lower normative hierarchy. It is as if a transitory article, which deals with temporary provisions, approves the application of the death penalty, when it is expressly prohibited in the country.

The justification for extending Zaldívar’s mandate came this Friday, when the Executive argued that it is necessary to keep Zaldívar in order for him to conduct a far-reaching reform of the Judiciary. This reform was presented by the president of the Court himself in February of last year, but since he is not empowered to promote constitutional initiatives, it was proposed by López Obrador. “It is the most ambitious constitutional reform on this issue since 1994,” says Juan Jesús Garza Onofre, from the Legal Research Institute. It was approved at the beginning of 2021 and to work it is required that the secondary laws be adapted, which were the ones that were voted this week in the Senate. “There was never talk of expanding the mandate of the ministers or altering the composition of the Court,” he explains.

The introduction of the change without notice was made through a reservation filed by a senator from the Green Party and without any similar precedent in more than 25 years. It was read on the platform in less than two minutes. The text of the secondary laws was over 500 pages long. “It is evident that many legislators did not know what they were approving and that it was not discussed in depth,” says Garza Onofre. “The result was an attack against the Judicial Power, which was carried out as dark and in a tricky way ”, he adds.

The forms fueled suspicions about the intention to extend Zaldívar’s term until 2024, the same year that López Obrador leaves power. “It is very problematic because precisely one of the main guarantees of the independence of the Judicial Power is that their periods are transsexenal, that they do not coincide with those of the other powers so that they are not committed to those who appointed them or to those who left,” says Miguel Alfonso Meza, researcher for Mexicans Against Corruption and Impunity. “The Supreme Court is designed to be a counterweight and it seems that for the president it is quite convenient to have a comfortable Court,” he says.

For much of the opposition and critics of the government, the extension of the mandate of Zaldívar, who has a cordial relationship with the Executive, can be used to compromise the minister president to pave the way of Morena in the courts or to set a precedent for extend the duration of other positions, such as that of the President of the Republic. López Obrador has insisted that he will not seek re-election, although this week he said that he will leave “quietly” in 2024 “if the people allow it.” “It is a kind of simulation of what may come,” adds Meza.

The most debated point is what is the political payoff. “I do not think it tends to be authoritarian, but there is an idea of ​​having more control on the part of the president,” adds Garza Onofre. For Valadés, beyond the political calculations, what is worrying is the abuse of the legal order in a “arbitrary, careless and arrogant” way. “We are talking about the fact that they are all legislators with experience and extensive experience,” says the academic, “who did not mind violating the Constitution.” Another hypothesis among the academics consulted is a simple legal mess in the ruling bloc’s legislation, a stumbling block that has been encountered on more than one occasion.

The controversy also splashed on the opposition, since the law was also endorsed by a handful of legislators from the Institutional Revolutionary Party. “I do not think they can say they were mocked, the opposition deputies who approved it have to take responsibility for what they voted for and show their face,” says opposition deputy Martha Tagle, who hopes the minute reaches the lower house in the next days. It remains to be seen if the extension of the mandate will be reversed, from which the Federal Judicial Council itself, the oversight body of the Judiciary, has disbanded.

“The opposition will definitely be put to the test,” affirms the legislator from Movimiento Ciudadano. Tagle anticipates that Morena’s parliamentary majority is enough for the changes to pass through the Chamber of Deputies, but the opposition bloc can still choose to file an unconstitutionality action if it gets the signatures of a third of the parliamentarians. In the scenario that the law is approved and then challenged, another question for debate is whether Zaldívar would have to excuse himself due to a conflict of interest or, even, if he would have to position himself after approval in the Senate. In recent years, Zaldívar himself has already voted against extending the mandate of the governor of Baja California, Jaime Bonilla, and the terms of the magistrates of the Electoral Tribunal. Valdés, for example, considers that he should not do so, while Meza and Garza Onofre, yes. “The embarrassing thing is that everything has been very unnecessary,” says Garza Onofre, “both Zaldívar and the other ministers are between a rock and a hard place.”

The discussion is just beginning and will be in the political arena in the coming weeks. Two months before the elections, where more than 20,000 public offices will be at stake, all eyes are on actors accustomed to seeing the contest on one side of the field: the National Electoral Institute, the Electoral Tribunal, the Supreme Court. “Morena is wearing down the institutions a lot and the ‘referees’ are becoming the protagonists,” says Garza Onofre. “All this should lead to a reflection on how democracy is operating in Mexico because polarization has led to a spirit of tension and the search for consensus has come to less,” concludes Valadés.

There is never peace for Michoacán

Ground breeder in the live stream: Lapwing camera in the Wetterau