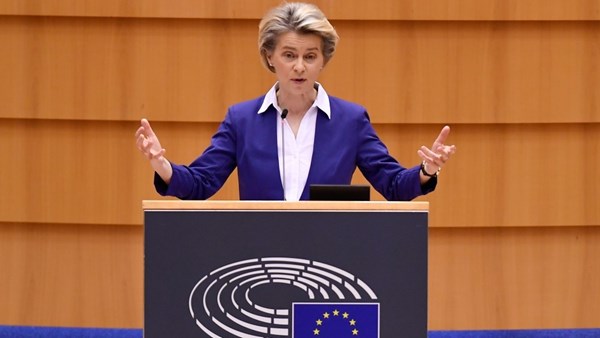 European Commission President Ursula von der Leyen welcomed today, Wednesday, the presence of a friend in the White House who can work with Europe in the fight against climate change, overcome the Covid-19 pandemic and return to multilateral diplomacy.
She added that she hopes the new US President, Joe Biden, will cooperate with the European Union to impose legal standards and rules for the digital world to curb hate, lies and fake news.
“In a few hours (Donald) Trump will become history, but his supporters are still there,” von der Leyen told a group of journalists in Brussels before the inauguration of Joe Biden as president.
“I think we have all seen the impact of our democracy and sometimes the strong negative impact if there is hatred, polarization and false news,” she said. I am sure we will have an ally to remedy that. ”
Relations between the European Union and the United States were fluctuating during the Trump era, and there was especially tension on the trade file. Von der Leyen said she hopes the European Union and Biden can achieve much together.
“We both realize that what we need now is to set a global agenda, work together and confront the major issues that we are dealing with,” she added. Let’s fight climate change together, beat the pandemic, and rebuild multilateral diplomacy. ”
Von der Leyen, the first woman to hold the presidency of the European Commission, the executive arm of the European Union, welcomed the inauguration of Kamla Harris as the first female Vice President of the United States.

A Russian woman who visited Zanzibar described it with the words “scary, dirty, stuffy”

Police Police are asking for observations of a self-disclosed man in Kivistö, Vantaa