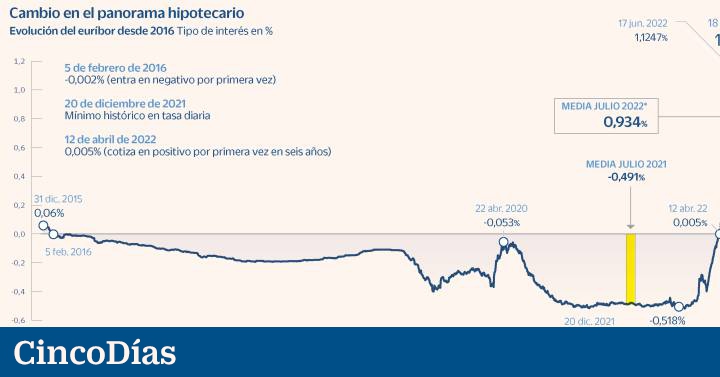 The European Central Bank faces a key meeting on Thursday. It will raise interest rates for the first time in 11 years, by 25 basis points, although high inflation and the devaluation of the euro, which has recently touched parity with the dollar, put pressure on the monetary authority to go further. The 12-month Euribor awaits the crucial appointment again above 1% in daily rate. The indicator exceeded that threshold in mid-June for the first time in almost a decade, just as the ECB met urgently after the risk premiums of the southern European countries shot up. It had been below 1% for the whole of July, but marked 1.057% on Friday and 1.015% yesterday, placing the provisional average for the month at 0.934%. The market expects sharp movements until the ECB’s decision.

The Euribor is well above the value of just one year ago (-0.491%), which translates into a notable increase in the price of variable mortgages linked to the index. An average loan of 180,000 euros over 25 years with a spread of 1% to which it is time to review will pay 116 euros more per month or 1,396 euros more annually. The rise will affect the 4.1 million variable-rate mortgages in Spain – out of a total of 5.5 million outstanding mortgages. Between them they add 400,000 million in credit with mortgage guarantee, according to data from the Spanish Mortgage Association (AHE).

See also  Chile begins the campaign for the constitutional plebiscite

“The depreciation of the euro and the increase in inflationary pressures push the ECB towards greater forcefulness in its next meeting, but the economic risks and the increase in sovereign premiums act in the opposite direction,” they comment in MacroYield.

The ECB announced in June that it will raise its reference rate for the first time since April 2011. The increase will bring the deposit facility to -0.25% (it is currently -0.5%). But the most important thing will be the message for the future, which presumably implies some confirmation that in September there will be a higher rate hike, of 50 basis points, which will take the deposit rate to positive territory for the first time since July 2012 Thus, analysts believe that the Euribor could reach 1.5% in the coming months.

The Organization of Consumers and Users (OCU) advises holders of variable mortgages the “need” to have “a margin of savings or sufficient income” to face the increases. In half a year, the Euribor has gone from record lows around -0.5% to going positive in April and exceeding 1%.

The expectations of interest rate hikes in the next six months are in the zone of maximums. “We expect very vertical rises in the Euribor, since it is likely that in mid-2023 the central banks will be forced to interrupt the rises and even lower rates to stimulate the economy again,” says Joaquín Robles, from XTB.

In general, banks have raised fixed mortgages from 1.5% to 3% on average in just six months. But variable mortgages offer a lower differential in response to the rise in the Euribor. Faced with the dilemma of what to choose, the OCU predicts three possible scenarios. First, that the Euribor reaches 2% in 2024 and remains stable, a case in which the fixed loan is more favorable, with savings of 4,232 euros compared to the variable one. Second, that it rises to 2.5% in 2023, falls progressively between 2024 and 2028 to 0.5%, is stable at 1% for four years and then rises to 2%. “Here there are hardly any differences between fixed and variable,” he says. Third, that it rise rapidly to 2.5% and drop sharply to 0.5% from 2026 to 2028, to then normalize at 2%. The variable option would be the best, since 1,296 euros less would be paid.

See also  Relationships Katriina went crazy with her coworker even though her husband was waiting at home - When a couple falls in love with another, there is often a surprising reason behind it, says the expert Hot Spain, 510 victims in one week