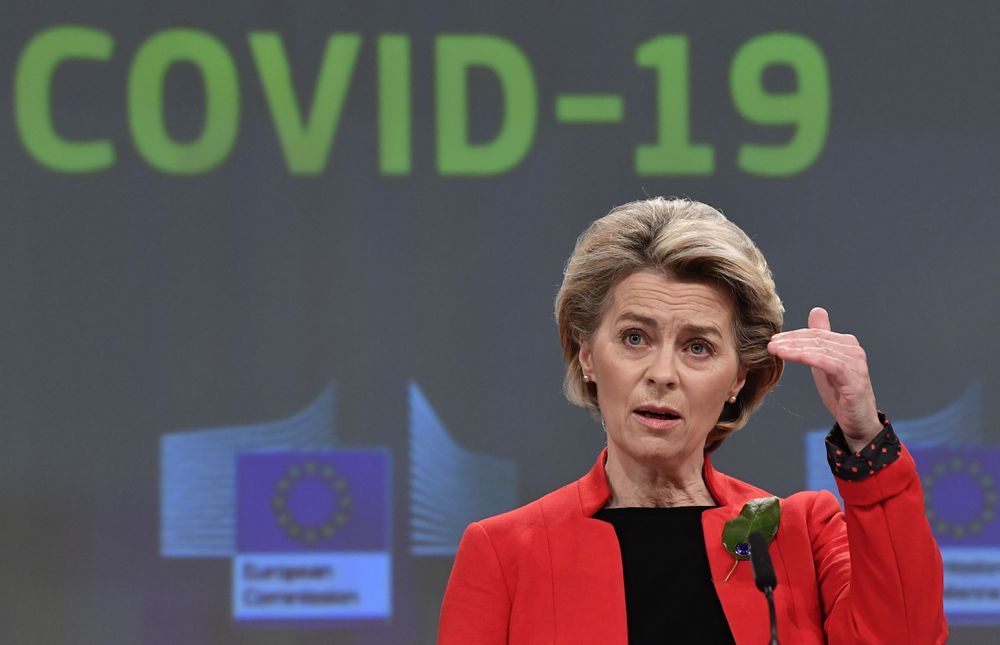 Vaccine war drums between Brussels and London. The president of the European Commission, Ursula von der Leyen, has threatened this Wednesday to suspend European exports of vaccines to countries that have their own production but do not export. Von der Leyen has aimed directly at the United Kingdom, which since February 1 has received 10 million doses manufactured in EU territory but from where not a single vial has left for the community market. Brussels is ready to start a real trade war to ensure that European production goes first to immunize EU citizens. Meanwhile, the United Kingdom will suffer a significant reduction in the number of vaccines available from March 29 “due to a supply cut”, according to a letter published by the state health service.

“The production of vaccines and their distribution in Europe must be the priority,” said Von der Leyen at the press conference after the weekly meeting of the European Commission. The agency has approved a vaccination certificate project and a plan for the safe reopening of economic activities paralyzed or slowed down by COVID-19, such as the tourism sector, the hospitality sector or the culture, leisure and entertainment sector. But the success of this recovery strategy depends, according to the Commission, on accelerating vaccination campaigns, hampered, among other things, by the lack of supply from the British laboratory AstraZeneca.

Doubts in several countries, including Spain, about the side effects of the Anglo-Swedish vaccine have led to the temporary suspension of its use, which has further disrupted the rate of vaccination. But the Commission is convinced that the situation will be clarified this Thursday, when the European Medicines Agency issues its report on the recorded incidents. And Brussels hopes that the AstraZeneca product will contribute to campaigns that aim to vaccinate half the adult population before summer and 70% by the end of that season.

Von der Leyen has warned that in the coming weeks, depending on how deliveries evolve, he could tighten the export control regulations that came into force on February 1 in response to the first delays from AstraZeneca. This regulation makes the export of vaccines subject to a national permit that has been granted 314 times in six weeks and has only been denied once.

The Government of Boris Johnson has responded to the warning of the president of the European Commission demanding that it “keep its word not to restrict the exports of those companies that are complying with their contractual obligations.” Downing Street came to demand explanations last week from the EU ambassador in London, Joa Vale de Almeida, in the face of accusations that London had banned the export of vaccines. The British Executive has denied this at all times, although it ensured from the beginning with AstraZeneca that the first supplies would go to the United Kingdom. “We have already said on previous occasions that the global recovery from the pandemic requires international collaboration. We all depend on global supply chains, and restricting them puts the global fight against the virus at risk, “said a Downing Street spokesman.

The Commission’s harsh tone coincides with an epidemiological situation that, according to Von der Leyen, “is getting worse.” Brussels is pinning its hopes on an increase in the rate of vaccination in the second quarter with the arrival of 200 million doses of BioNTech-Pfizer; 35 million from Moderna and 55 million from Johnson & Johnson. AstraZeneca has promised to deliver 70 million, but Brussels prefers to compute them separately given the unreliability of the company’s forecasts so far, which have been systematically breached.

“It is difficult to explain to our citizens that European vaccines are being exported at the same time that there is not enough supply for them,” said Von der Leyen. Since the regulation came into force, more than 41 million doses have left the EU to 33 countries, a figure equivalent to 64% of the almost 65 million distributed in Europe.

10 million doses to the UK

Von der Leyen stressed that “the United Kingdom has been the number one destination for our exports, with 10 million doses in six weeks.” The flow has been towards the British shore because no road has crossed the English Channel in the opposite direction. “We are the most open continent, but the traffic has to be in both directions,” complained Von der Leyen. And he has warned that “if necessary we will see how to adjust our exports so that they are based on reciprocity and, in the case of countries that have a higher vaccination rate than us, also on proportionality.”

As of March 15, the UK had vaccinated 24.8 million people with one dose and 1.6 million with both, according to British government data. Those figures put the UK with a vaccination rate of 39%, well ahead of the 9% of the European population that received the first dose.

The British breakthrough has largely been achieved with the vaccines produced in Europe by BioNTech-Pfizer, the first to be licensed by London (early December) and which immediately delivered 600,000 doses. The UK has so far used around 11 million doses of AstraZeneca and has covered most of the remaining punctures with the drug developed by Germany’s BioNTech and produced on a large scale by Pfizer in Belgium and Germany.

The departure of vaccines from Europe contrasts with the absence of British production in the countries of the continent. AstraZeneca, which has lowered its expected deliveries in the first quarter from € 90 million to € 30 million, still does not use its British factories for European supply despite the fact that, according to the Commission, this requirement is contained in the purchase contract signed in August 2020.

Brussels is willing to put an end to this imbalance even at the risk of unleashing a trade war with the government of Boris Johnson. The first skirmish occurred earlier this month when the President of the European Council, Charles Michel, accused the UK and the US of “having imposed a total ban on the export of vaccines or vaccine components produced in their territory.”

Michel’s words provoked an angry reaction from the Johnson Executive, who denied the existence of that ban and demanded a rectification. Brussels has admitted that there is no legal veto in the United Kingdom on exports, but notes that de facto not even a vaccine leaves for European territory. “There are different ways to prohibit or restrict [la exportación] of vaccines and medicines ”, answered Michel. And he settled the matter by stating that “I am happy if the UK’s reaction leads to more transparency and increased exports to the EU and other countries.”

Exports to the EU, however, remain non-existent, according to the Commission. And Von der Leyen, in an increasingly threatening tone, has warned that “all options are on the table” to guarantee an increase in distribution in Europe. Possibilities include activating Article 122 of the EU Treaty, which would allow the production of pharmaceutical companies to be seized or impose the obligation to share patents so that other companies can join the production chain.

Michel already invoked those special powers after the first delays in AstraZeneca deliveries. The Commission then rejected such a blunt intervention and privileged negotiations with the laboratory to improve the delivery schedule. But that strategy has failed, and AstraZeneca has cut not only expected deliveries in the first quarter but also in the second, from 180 million to 70 million.

The new setback leads Von der Leyen to warn that he does not rule out “nothing” in reference to the extraordinary powers of Article 122. And he recalled that those extraordinary powers were already wielded once, during the oil crisis of the 1970s. “Now we are in the crisis of the century ”, added the community leader. “We have to ensure that Europeans are vaccinated as soon as possible. Human lives, civil liberties and also our prosperity depend on the speed of vaccination ”.

Godzilla vs. Kong: Movies You Must See To Understand The Battle

Corona: Lauterbach calls for a “harder lockdown than a year ago” – Spahn announces more freedom for vaccinations