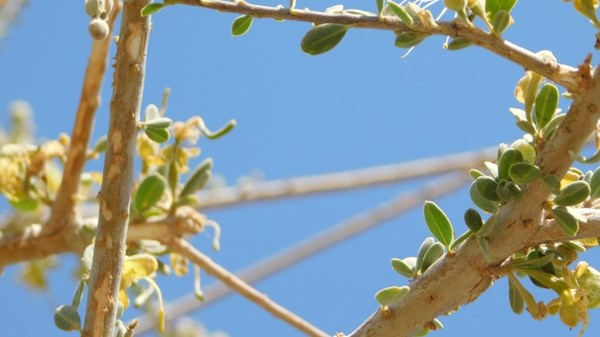 The Environment Agency – Abu Dhabi planted 25 seedlings from Al Sarh trees within the boundaries of Jebel Hafeet National Park, as part of the program of conservation and propagation of important local plants. This comes in implementation of the directives of His Highness Sheikh Hamdan bin Zayed Al Nahyan, the Ruler’s Representative in Al Dhafra Region, Chairman of the Environment Agency in Abu Dhabi, to propagate and preserve the local Al Sarh tree.
The Al Sarh tree is considered one of the local trees that support biological diversity and add beauty to the wild environment in the emirate, and it is one of the rarest plant species in the UAE, as it was previously registered in the Emirate of Ras Al Khaimah only, while the authority registered and documented during the middle of last year the existence of only one tree in the Emirate of Abu Dhabi. It is estimated to be more than 100 years old, specifically in one of the rock formations in the Malakat area, east of Al Ain, near the border with the Sultanate of Oman, in an area surrounded by a network that is difficult to enter, which contributed to providing protection for the last tree of this type in the emirate.
Dr. Sheikha Salem Al Dhaheri, Secretary General of the Environment Agency – Abu Dhabi, said, “After the directives of His Highness Sheikh Hamdan bin Zayed Al Nahyan were issued, the authority made numerous attempts to multiply the Al Sarh tree, as seeds were planted for propagation in the nursery run by the authority in the Al Dhafra region. Production of more than 50 small seedlings, of which 25 were replanted within the boundaries of Jebel Hafeet National Park.
Her Excellency indicated that “the authority has created small incubators to provide protection and shade for seedlings and reduce evaporation and stress, as in the first stage they are supplied with water, and then irrigation will be gradually reduced so that they can grow without the need for irrigation while continuing to monitor and follow up the growth of trees and their adaptation to the surrounding environment.” Dr. Al Dhaheri, that the authority will continue the operations of breeding the Sarcophagus and rehabilitating its natural habitats by replanting them within the distinct plant groups of those habitats in selected sites from its natural habitats.
For his part, Ahmed Al Hashemi, Acting Executive Director of the Land and Marine Biodiversity Sector at the Authority, said that the Al Sarh tree, which has been registered in the UAE only in Ras Al Khaimah, is an evergreen tree up to 8 meters high with small oval leaves with leathery texture and is dense. On the branches, which gives the tree a dense, spherical green crown that provides excellent shade when fully grown. Its single, radial flowers form in January and February and turn into small, horny fruits that ripen in March and April.
Al-Hashemi added that the Al-Sarh tree is considered one of the trees of African spread that infiltrates in its spread at minimal borders to the Arabian Peninsula in each of the Hashemite Kingdom of Jordan, Palestine, the Republic of Yemen, the Kingdom of Saudi Arabia, the Sultanate of Oman and the United Arab Emirates. The Sultanate of Oman and the UAE represent the global eastern limit for the spread of this species, as it stands within it and does not exceed it in the east.

The most unexpected leap from ERTE to ERE