The enigma of the sharks that appear ‘stabbed’ by swordfish 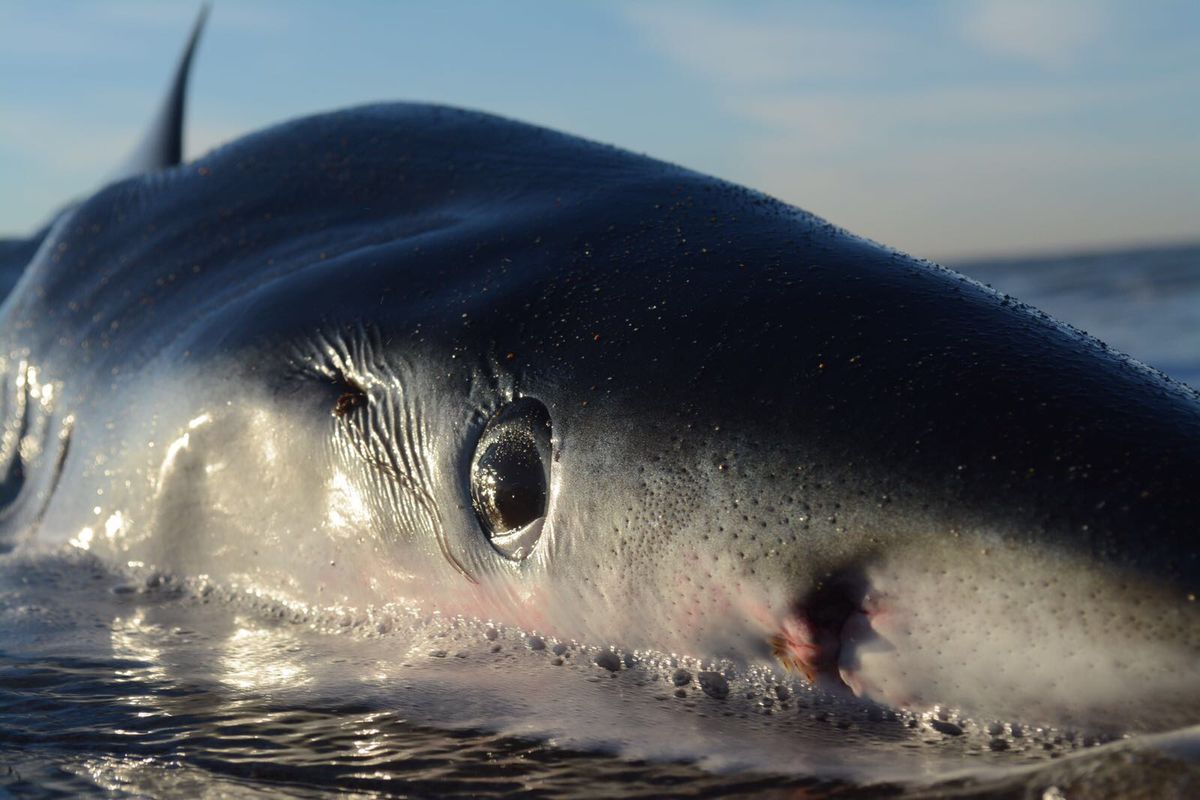 Last week, the presence of a blue shark specimen forced the evacuation of a beach in Benidorm. This specimen of shark, about two meters and 80 kilos, became disoriented and ended up in an area full of bathers. A rescue team from the Oceanogràfic of Valencia He managed to capture him and, after some tests, he verified that he was in good health and returned him to the sea. On Saturday, that same specimen was located in the municipality of El Campello, 30 kilometers to the south. The next day, his lifeless body was found in that town. The cause of death appears to be a small wound under the animal’s eyelid, which could already be seen in some videos recorded on Thursday by the Maritime Service of the Local Police and which is compatible with the attack of a swordfish. These types of attacks were a complete mystery to scientists until recently, but a series of recent cases has redirected research towards the relationships between these animals.

The first case of a shark killed by a swordfish attack of which there is scientific evidence occurred in Valencia in 2016. The specimen was found dying on a nearby beach. Subsequent tests detected a 7-inch sword fragment embedded in his brain. “The sword completely pierced and split the shark’s brain in two,” explains Jaime Penadés, researcher at the Marine Zoology Unit of the University of Valencia, author of that study and in charge of the necropsy of the Benidorm specimen. “We hallucinate at the time. We didn’t expect to find anything like this, ”he says. That first article was a wake-up call to the scientific community to see if there were more signs of this type of attack. Since then, similar articles have been published from Italy and Lebanon.

By June 2019, the Penadés group had managed to document five other assaults, although they have since found new cases, which will be published soon. In all of them, the lunges follow the same pattern. “The attacks are to the head, so there is an intentionality on the part of the swordfish. It is not a random attack. It is also very accurate because it goes to the eyes or the brain, which are vital structures, ”says Penadés. Due to the limited data available, it is difficult to know if attacks on other areas of the body are also common. In the same way, the researchers do not know if it is a proactive aggression by swordfish or in self-defense, although Penadés suspects that, due to their smaller size, they are likely to seek to defend themselves.

The rescue group tries to push the stranded blue shark into deeper waters last weekend in Benidorm. On video, the blue cleaner on the shore. EFE / Manuel Lorenzo and Juan José Mascarell

The main obstacle to finding more samples of these attacks is that the sharks do not float. “It is very difficult for a shark to end up stranded. With dolphins it’s easier because they float, but sharks usually sink, ”says Penadés. In addition, these clashes occur at shallow depths, which makes their study more difficult. To this, it must be added that the tests necessary to detect these fragments are not done routinely. “Normally, in a necropsy, cerebrospinal fluid is removed, but the skull is not opened or a complete dissection is made,” says the expert.

Fortunately for the researchers, the Valencian Community Stranding Network has records of the specimens found in the waters of this community, which allowed them to review the conditions in which some specimens had arrived. “Now we have been able to look back and see some sharks that had similar injuries that we did not know what they were from,” he says. With the help of the Oceanogràfic Foundation, they managed to perform several CAT scans and X-rays. a shark that had a piece of sword already healed inside the skull. It was an animal that had survived an attack by a swordfish, ”says Penadés.

The explanation for why these types of attacks are being detected more could be very simple. “Until now no one had looked at that,” says the expert. There could be a cause that provoked them, he believes, such as global warming, which could have some influence, but he admits that they currently do not have data to certify it. “Today we all jump very quickly to talk about climate change, which is true that it is a reality. But in this case I think it is more something that we did not take into account, that we were not even reviewing, “he argues.

Science had recorded numerous cases of turtles, whales or small boats impaled by swordfish. Tips have even been found stuck in a kind of float used in very popular anti-submarine mines during World War II. But the clashes between swordfish and sharks only appeared in some books, in stories of some fishermen. “This more traditional knowledge tells us that the fishermen had already found a shark that had a sword stuck in its head. Scientists are far behind what is popular knowledge and sometimes we have to get closer to fishermen ”, acknowledges the researcher.

However, Àlex Bartolí, biologist with the organization for the conservation of marine biodiversity SUBMON, reject this argument. In his opinion, these attacks are fortuitous and would occur while hunting. “Within the schools of fish, all the predators are trying to catch what they can. Swordfish move their sword to hit the small fish and, once stunned, eat them. In this maelstrom, predators go by at high speed and I think collisions occur ”, he assures. According to Bartolí, these animals do not fight for the same habitat, since they are migratory species; They do not do it to defend the young, since they ignore them once they lay their eggs; and neither does an attack to feed him make sense. “The energy that a shark attack on a large animal requires is not worth it,” he says. Still, he admits that he may be wrong, as the sample of cases is still small. “I think it is a hypothesis that remains open and from here on we will have to contrast the evidence, but until there are more cases, it is difficult for me to imagine a fight between a blue shark and a swordfish,” says the biologist. The doubt, then, remains open.