The enigma of Alzheimer’s: its incidence falls by 16% every decade without the existence of any drug 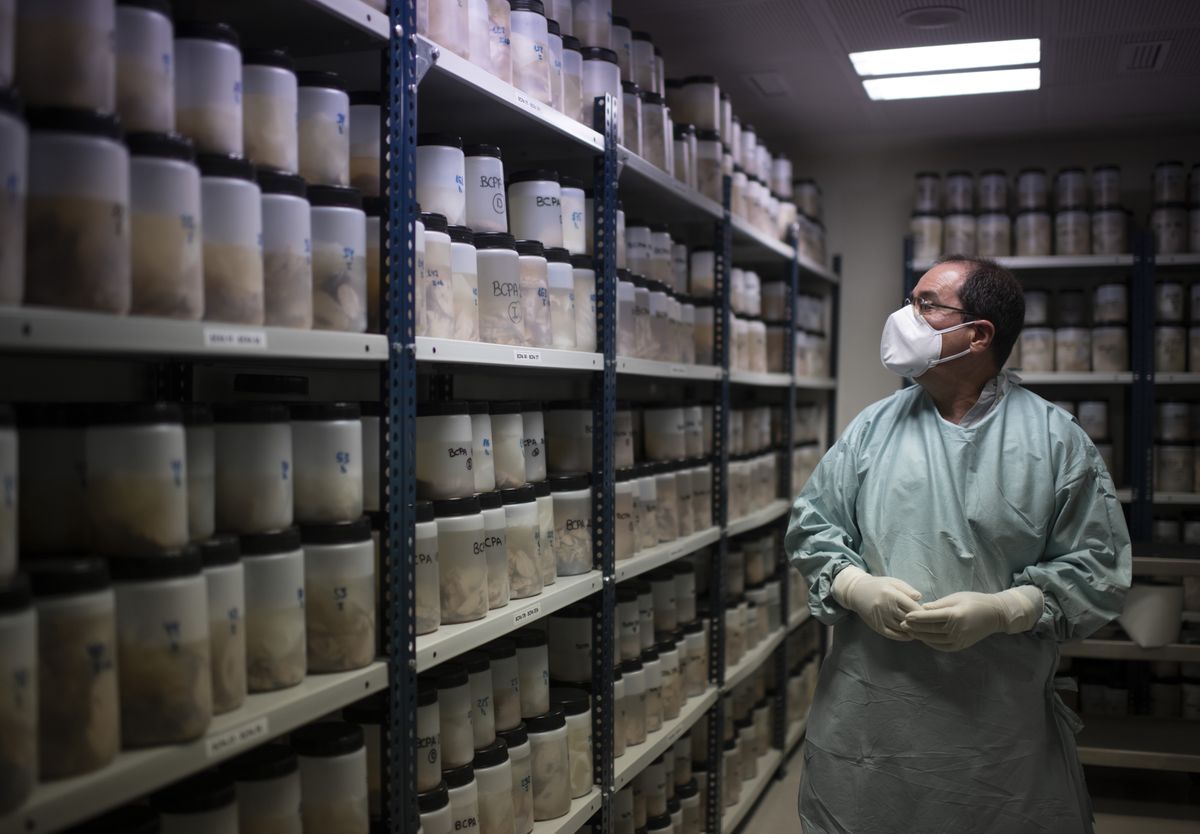 The brain that created the series Blue summer Y Pharmacy open it rests in formaldehyde on a shelf in the Madrid neighborhood of Vallecas. Director Antonio Mercero He lived with Alzheimer’s for the last years of his life, but continued to meet his old friends. One of them, the filmmaker José Luis Garci, recalled In an interview that one day Mercero told them: “I am amused by what you say, although I don’t know who you are. But I know that I love you very much ”. The creator, after a decade with dementia, died in 2018 at the age of 82 and donated his brain to science. He wanted his gray matter to help illuminate what is known as “Great silent epidemic of the XXI century”.

The pathologist Alberto Rábano He walks between brains with love and respect, as if he knows them all. Directs the Tissue Bank of the CIEN Foundation, with more than a thousand donated organs – including that of Antonio Mercero – dedicated to the research of neurological diseases. The scientist reflects on a great paradox: more than a century after the discovery of Alzheimer’s, its causes are unknown and there is no treatment. Nothing. And yet the incidence is plummeting in rich countries, at a rate of 16% every decade since 1988, perhaps thanks to factors such as education and cardiovascular health, according to A study from Harvard University (USA).

“We do not know the cause of Alzheimer’s and we will never know it, because there is not one cause, there are many,” says Rábano. So far, scientists have focused on two big suspects. In the brains of people with Alzheimer’s, a protein, called amyloid beta, clusters between neurons. And a second protein, called tau, forms tangles inside brain cells. The role of these molecules in the disease is not yet very clear. Thinking that these proteins are responsible for Alzheimer’s is like arriving at a crime scene and believing that blood is to blame for the murder, in the neurologist’s words David perez, from the Hospital 12 Octubre, in Madrid.

The search for a treatment, however, has been focused on clearing beta amyloid from the brain. All the experimental drugs have failed so far, but the US authorities decided on June 7 to authorize the most recent, aducanumab, manufactured by the US pharmaceutical company Biogen at a price of more than 40,000 euros per patient per year. This is the first time that a treatment targeting the suspected causes of Alzheimer’s has been approved: aducanumab clears beta amyloid, but this has not been shown to be of clinical benefit to patients. It is not yet known if it works.

Radish stops at shelves that break the monotony of the brain bank. “This is from a sea lion doing a Show disguised as a cowboy at the Madrid Zoo ”, he explains, pointing to a boat. “This is from a white rhino. I had to take it out with an ax ”, he recalls showing another container. The brains of old animals that die in the zoo they also end up in Rábano’s archive. There are lions, wildebeest, dolphins, koalas, chimpanzees, giraffes. The researcher shows the image of a Siberian tiger brain filled with beta amyloid protein. “In many mammals we see Alzheimer’s-like changes, but they do not develop the disease,” he explains.

The pathologist believes that one of the historical reasons for failure to seek treatment has been errors in diagnosis. “Alzheimer’s is never alone. We have to get it into our heads that it is not enough to diagnose Alzheimer’s, ”explains Rábano. In the world there are about 50 million people with dementia, 65% of them with Alzheimer’s, according to the World Health Organization. But there are other forms of dementia, which are often mixed: vascular, Lewy body, taupathies, LATE encephalopathy. Radish invites citizens to become brain donors, to assist in the investigation. Some clinical trials may have failed because Alzheimer’s drugs were tested in people who didn’t just have Alzheimer’s.

The neurologist Rachel Sanchez Valle, from the Hospital Clínic de Barcelona, ​​is optimistic. “We have changed the phase in Alzheimer’s research,” he says. His team participated in the Engage, an international clinical trial with 1,650 patients to test the controversial aducanumab. The results were not conclusive, but the researcher emphasizes that the elimination of the amyloid beta protein in the brain did improve the indicators associated with neuronal death, although no clear improvement was observed in the patients. “We need longer trials, much longer,” he explains.

Aducanumab is a monoclonal antibody: it is the natural defenses of a lucid old man multiplied in the laboratory. Sánchez Valle recalls that in the next two years there will be results of three other similar experimental drugs: gantenerumab (from the Swiss company Roche), donanemab (from the American Lilly) and lecanemab (from the Japanese Eisai). “We cannot pretend to go from having nothing to curing Alzheimer’s. Aducanumab is a first step. And many times the first drug that arrives is not the one that stays, ”says the neurologist.

Other researchers are more skeptical. The neurologist Michael Greicius, medical director of the Center for Memory Disorders at Stanford University (USA), believes that the approval of aducanumab may even hamper the investigation of other treatments. “Patients will be less willing to participate in clinical trials if they are already taking a new approved drug that they think works,” he warns. The researcher also recalls that aducanumab caused cerebral edema 40% of patients treated with a high dose.

Joaquina Garcia del Moral, a retired teacher from Motril (Granada), has participated in the other great international aducanumab experiment, the so-called Emerges, also with 1,650 patients. Surprisingly, while the Engage trial did not observe clinical improvement in the participants, its twin Emerge did suggest a 20% slowdown in cognitive decline. García del Moral, 66, was diagnosed with Alzheimer’s when he was 59. “I forgot the names of the students and I got lost in the car or walking,” he recalls. “After five years of treatment with aducanumab, I lead a normal life and I feel capable of everything. My life has changed. I don’t know if this is debatable, I’m not a scientist ”, she says.

Your neurologist, Eduardo Agüera, it does leave the door open to other explanations. “Most likely, Joaquina’s improvement is attributable to aducanumab, but it is not 100% certain,” he acknowledges. Agüera, from the Reina Sofía Hospital in Córdoba, also asks to give the drug a margin. “If the alternative is that there is nothing and let people die slowly with dementia and with aducanumab there is little hope, well, great,” he says.

Joaquina García del Moral is a member of the Expert Panel of People with Alzheimer’s, promoted by the Spanish Alzheimer’s Confederation (CEAFA). The organization is putting pressure on the authorities so that aducanumab is also approved in the European Union. “This medicine has to come out yes or yes in Europe. We are many millions of patients who need this drug ”, proclaims the patient.

The president of CEAFA, the sociologist Cheles Cantabrana, explains that the confederation received “gladly” the approval of aducanumab in the US “The suffering that Alzheimer’s causes in families is very great and the costs are very high. There are millions of people suffering. Let’s give them a chance, or are they second-rate patients? ”Asks Cantabrana, whose parents died with dementia. His organization estimates that Alzheimer’s affects about five million people in Spain, including patients and family caregivers.

The European Medicines Agency has already is studying the results of aducanumab to assess its possible authorization in the EU. And the controversy is guaranteed, in the opinion of the doctor César Hernández, of the Spanish Agency for Medicines and Health Products. “It is a discussion that will give a lot to talk about in Europe. There are a lot of controversy about whether beta amyloid plaques really reflect the progression of the disease, “he says. Of the 104 experimental drugs that are being tested in the world against the supposed causes of Alzheimer’s, 16 are focused on the beta amyloid protein and another 11 on the tau protein.

In protest at the approval of aducanumab in the US, three experts resigned from the independent committee that advised the US drug regulatory agency. The neurologist David knopman, from the Mayo Clinic, was one of them. Before resigning, he had stated that it was “indefensible” to authorize a drug with no clear clinical benefit after 18 months of treatment. “In many respects, we are winning the war against Alzheimer’s, but in such a long-term fight we are not going to win all the battles,” he reflects.

Knopman has focused in recent years on “the enigma of the waning incidence of dementia ”. The absolute number of cases increases, because life expectancy grows and there are more and more elderly people, but the percentage with Alzheimer’s is actually decreasing. Even in autopsies of donated brains less accumulations of beta amyloid protein are seen. Rich countries, obsessed with finding a drug against Alzheimer’s, have managed to reduce the incidence of the disease by 16% every decade without realizing it.

A commission organized by the medical journal The Lancet calculated last year to modify a dozen risk factors can prevent or delay 40% of dementias. The 12 variables are lack of education, hypertension, hearing impairment, smoking, obesity, depression, physical inactivity, diabetes, social isolation, excessive alcohol consumption, blows to the head, and pollution. atmospheric. In Latin America, the preventable percentage of dementia cases reaches 56%, according to the same authors.

Antonio Mercero directed a film about Alzheimer’s –And who are you? (2007) – before suffering its consequences himself. In the presentation of the film, declared: “It’s tremendous. At this moment, anyone tells you that they have their cousin with Alzheimer’s, another has their uncle, another their father. It is a tremendous thing. Alzheimer’s appears everywhere ”. The World Health Organization estimates that the number of people with dementia will triple and will exceed 150 million by 2050. By avoiding risk factors, some 40 million cases could be prevented, without the need for any miracle drug. Neurologist Raquel Sánchez Valle, 50, also believes that treatment will come sooner rather than later. The G8 countries pledged eight years ago to have an effective cure or therapy against dementia in 2025. “We will not have a cure in 2025, but I do hope to see an effective treatment before I retire,” says the doctor. “And it won’t be the aducanumab.”