The drama of those who lost everything due to the earthquake in San Juan: ‘We managed to escape for a second’ 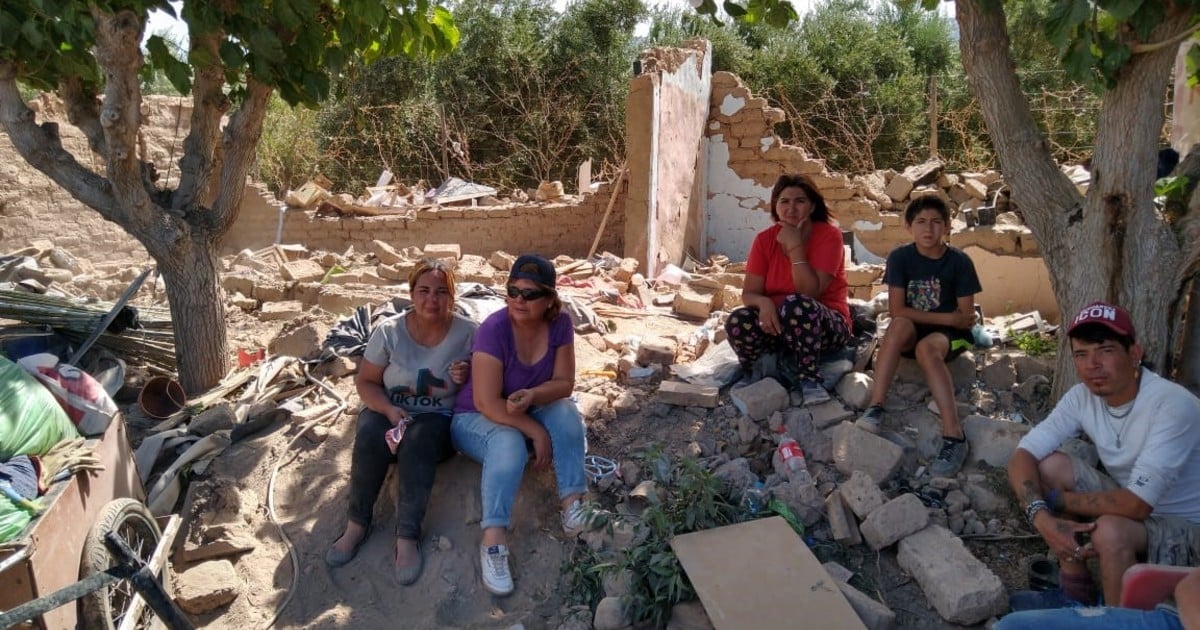 Pocito, the town south of San Juan where Governor Sergio Uñac was born, was one of the most damaged places by the 6.4 magnitude earthquake. More of 15 families they saw their precarious houses crumble at midnight on January 18. They lost everything.

To the west of the emblematic Route 40 and with the foothills as a geographical barrier, the Villa La Arrinconada, in calle 15 and Aberastain, has been ruined. At least three blocks of adobe houses – mud construction and non-seismic pipe – They collapsed with the shaking. Neighbors spent the whole night in the street, among the rubble, to take care of the few furniture, refrigerators, kitchens and clothes that they could recover.

Each testimony is shocking: helplessness, fear and grief for the damage caused by the most important earthquake of the last four decades in Argentina. Fortunately, there were no fatalities, only a few minor injuries from falling roofs and branches.

This is how the houses were left in the town of Pocito after the earthquake on Monday. Photo: Juan José García

Cintia Leiva, mother of four children, miraculously saved her life and that of her family: “We were finishing dinner with my husband and four children. He started shaking and we ran off. We cannot go down two steps that my whole house collapsed”, He tells Clarion About the terrifying night And he describes each moment as if it were a horror movie: “The power went out, the branches of the big trees fell off, the boys were crying … For a second we managed to escape”.

The young mother says that since they were awake, they managed to react. “Now I think what would have happened if we were asleep.” And he consoles himself: “Thank God I was able to go out into the street: my children screamed in despair, scared, panic because they had never experienced this. Thank God they didn’t hit each other ”.

In the following minutes and when the aftershocks were perceived, Cintia remembers that they began to look for their dogs that were upset, they did not stop barking. “My children were screaming for their pets that were trapped in the house,” he says. And even with his clothes covered in dust, he points to the rubble and laments: “He didn’t give us the time to get more things out. We lost everything”.

The tragedy of these families mobilized other neighbors who the following day went to collaborate. “We’re offering vegetables, fruits and water for the people who have been left with nothing, “said one of the members of the Flores family, who drove through the rough area in her truck.

Neighbors took the things they were able to rescue from their homes and many stayed in the place to take care of them. Photo: Juan José García

Later came state assistance. The secretary of security of San Juan, Carlos Munisaga explained the housing drama: “They are specific cases, which do not exceed 15 or 20 cases per department that are concentrated in areas of precarious housing settlements,” said the San Juan official.

This Wednesday, to assist the affected families, the municipality of Pocito and the Ministries of Human Development and Public Health of San Juan installed popular tents and pots. “Are more than 500 victims in the area, ”according to the Cuyo newspaper.

The injunction to “common sense”, a very practical formula to silence us

Mysterious and desperate request of Sinéad O’Connor to his fans