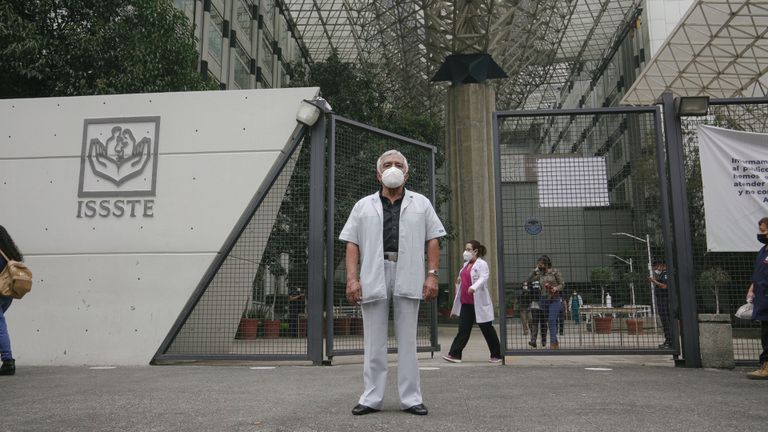 At age 70, Jorge Pérez was unemployed for demanding protective equipment against covid-19. He worked for a company subcontracted by the Institute of Social Security and Services for State Workers (ISSSTE) and had been placed in the Hospital 20 de Noviembre in Mexico City, one of the centers with the highest saturation of covid patients. Alarmed by the increase in cases and deaths arriving at the hospital, Pérez demanded that he and his colleagues be provided with adequate equipment to protect themselves during their work as cleaners, but there was no response. He made his case in an interview he gave to a local television reporter and on June 22, 2020, his employer fired him without justification, arguing that he should not have spoken to the press. Now Jorge is battling for compensation. But neither his old company nor the ISSSTE have paid attention to him. Its history has led to Amnesty International to start a campaign for the rights of hospital cleaners who are treating the pandemic.

“They didn’t give us any equipment. They gave us used gloves or flannels that were pure pieces, ”Jorge tells EL PAÍS in a telephone interview. “All my teammates still lack that. There are quite a lot of us, more than 300, taking shifts in the morning, noon and night ”, he adds. Pérez worked from six in the morning to two in the afternoon, for a salary of 3,800 pesos a month (about $ 190). At the end, he says, they put the unprotected workers to wait for supervision “where the corpses came out” of those who died from covid. He confesses that the work was strenuous and received a lot of pressure from his bosses: “They seemed like foremen behind you.” He even came to seek union support, but when he found out his superiors threatened to fire him. Now the old man, unemployed, depends on what his wife, Concepción Hernández (61 years old) earns, cleaning houses and ironing. “She holds the house,” he says. “I feel bad, I despair, I don’t know what to do, who to turn to,” regrets Jorge.

Amnesty International launched the campaign #JorgitoCuenta, with which it requires the director of the ISSSTE, Luis Antonio Ramírez, to pay compensation to Pérez and to guarantee protective equipment for health workers who are exposed to covid-19 in hospitals of the Mexican social security system. They also demand that the Secretary of Health, Jorge Alcocer, and the undersecretary of prevention and health promotion, Hugo López-Gatell, “make the information on vaccinated health workers transparent, including hospital cleaning workers who care for people sick with covid-19 ″. The organization’s investigation has documented that 3,100 people work cleaning in nine ISSSTE hospitals in the country’s capital and that the November 20 Hospital is the one with the most staff, more than 300 workers. “They are invisible,” says Tania Reneaum Panszi, executive director of the NGO in Mexico. “These people clean bathrooms, wash sick gowns, but nobody sees them and what we want is to focus on them. Mexico is a country that almost never sees people who provide certain services. We come from a society that does not see the other ”, he adds.

Reneaum Panszi explains in a telephone interview why the organization has taken the case of Jorge Pérez as a flag. “The Mexican State, in this case the ISSSTE, subcontracts cleaning services and turns its back on the contractual conditions of the workers, with the understanding that it is the company that has to take over. The State does not comply with the federal labor law, which establishes that there is a joint obligation in this type of hiring and reproduces adverse, unequal and precarious working conditions, when it should have an infrastructure to avoid job insecurity ”. Amnesty International had already denounced that Mexico has the highest mortality rate in the world among medical personnel due to COVID-19, with 1,320 doctors and nurses deceased due to the deficient medical supplies used and the absence of protection protocols.

Jorge’s case is made public months after President Andrés Manuel López Obrador launched a crusade against ‘outsourcing’. At the end of November, the president sent a bill to Congress that proposes to end the abusive practice of subcontracting in Mexico, a country where, according to data from the Ministry of Labor and Social Welfare, there are more than four and a half million people subcontracted and that, like Jorge, they do not have social security. Although at the beginning of December the Mexican government and businessmen agreed to a truce to discuss employment outsourcing schemes, a debate has been opened about job insecurity in Mexico. “The problem is not the ‘outsourcing’ companies, but the tolerance of the State to these business practices”, explains Reneaum Panszi. “The Government is one of the great generators of ‘outsourcing’ in the country. What is wrong is the abusive use that occurs to reduce the operating costs of companies and State institutions ”, he adds.

The NGO has requested meetings with officials from the Ministry of Labor and Health, but so far they have had no response. Reneaum Panszi says that last Wednesday they met with ISSSTE administrative authorities, who told them that they “did not understand the dimension” that the organization was giving to the story of Jorge Pérez, who still has not received his compensation. “I want them to pay attention to us,” demands the old man. “I don’t want there to be anomalies for my colleagues who are there, who suffer the same things that I suffered, but whose stories do not come out because they are afraid.” A fear that Jorge overcame and cost him his job.

Take advantage of this Gears 5 offer for Xbox and PC

Gladbach’s squad is not as broad as expected