The disease that disfigures a child’s face in 15 days 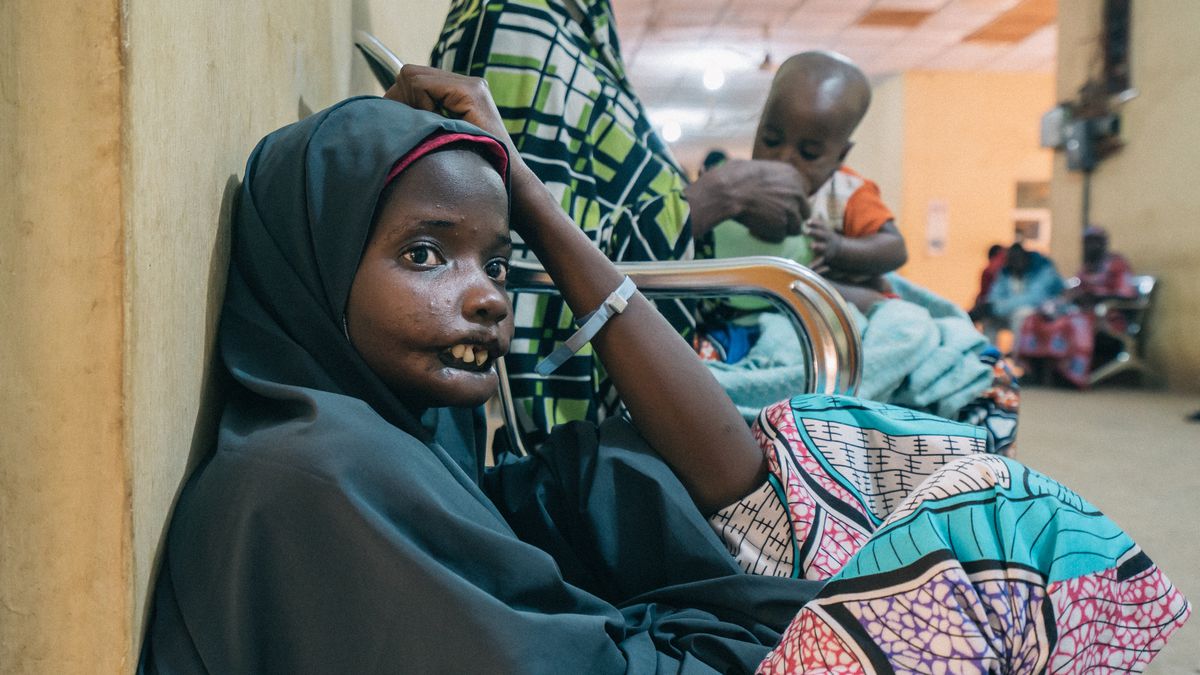 15 days. It is the time it takes for noma disease to disfigure a child’s face forever. It starts with an infection that inflames the gums; If not treated with an antibiotic, the recommended treatment, it spreads rapidly and in just a few days corrodes tissues and bones. It is one of the so-called neglected tropical diseases (NTDs), although not yet officially recognized, and it mainly affects children under the age of seven who live in poverty. According to the World Health Organization (WHO), about 140,000 people suffer from it each year and up to 90% of infected people die in the first two weeks.

In just a few days. That was what it took Amina, an 18-year-old Nigerian girl, to notice how her face changed forever: she began to notice a fever, then her gums more and more swollen and weak, until she felt a hole form in them. As she recounts this, in front of a camera, she covers her disfigured face with the veil that covers her head. She, along with other Noma patients, is one of the protagonists of the documentary Restoring Dignity, by the directors Claire Jeantet and Fabrice Catérini, in collaboration with Doctors Without Borders (MSF). It tells how the survivors of noma have dealt with its consequences, physical and psychological, and how an operation to restore their face changes their lives.

The operation is carried out at the Noma Children Hospital in Sokoto, a city in northwestern Nigeria, one of the few centers in the world specialized in this surgery. “Some of these survivors are scarred and rejected in their communities. But the good news is that when they come and undergo the operation, they live in society again, ”explains Samuel Joseph, a nurse from Doctors Without Borders (MSF) who accompanies patients in their process from the moment they arrive at the center. sanitary until they leave it, already recovered. After the intervention, many of them can breathe well again, regain full mobility of the mouth and are no longer the target of everyone’s gaze for their disfigured face. “I remember with special affection a young woman who suffered noma since she was two years old and who underwent surgery at 20; and to another boy who, after being operated on, was able to go back to work and get married, “recalls Joseph.

But noma is not the only neglected disease that affects childhood and that carries its consequences into adulthood. Pian is another of the tropical ailments that also erases the faces and deforms the legs of those who suffer from it and do not treat it. According to the WHO, it affects 500,000 people and approximately 75-80% of patients are under 15 years of age, of which the highest incidence is among children aged six to 10. Like the noma, which has its highest prevalence in sub-Saharan Africa and Asia, yaws is present in 15 countries, focused on two regions: in tropical forests of the Congo, Ghana and Ivory Coast and in the islands of the Pacific, such as East Timor and Indonesia, Papua New Guinea, Solomon Islands and Vanuatu.

“It is a disease directly linked to poverty; They are children who live far from a primary care center, who develop ulcers and cannot access treatment immediately. It is very curious because whatever country you go to, the same thing happens. It is not so much a general problem, but specifically poor, super isolated areas, such as some of India, where there are tribes affected by yaws and are not close to cities like Bombay and Delhi. In Ghana, to name another place, it is not present in cities like Accra either ”, explains Oriol Mitjà, doctor and associate professor of the European Research Council at the Germans Trias i Pujol hospital in Badalona (Barcelona). The Catalan scientist has focused his career on trying to eradicate yaws.

Since 1950, WHO and UNICEF have fought to eradicate yaws, an infectious disease that is related to syphilis, but is not sexually transmitted. The latest strategy to end it was launched by the WHO in 2020. This year, and after the celebration of World NTD Day, on January 30, the World Health Organization presented a route with an ambitious goal, which also included the fight against yaws: reduce by 90%, the population requiring care for one or more neglected tropical diseases (NTDs), by 2030. NTDs are a group of 20 diseases with major differences, but also something fundamental in common: the devastating effects on the health and socioeconomic conditions of populations, in many cases, already impoverished.

The lack of resources for this type of neglected diseases, in the end, hinders the progress and development not only of these people, but of the communities and countries where they suffer.

“The lack of resources for this type of neglected diseases, in the end, hampers the progress and development not only of patients, but also of the communities and countries where they suffer and further deteriorates their already precarious standard of living. All of this leads to perpetuating the vicious cycle of poverty and disease, since they are both a cause and a consequence of it, ”explains Eguzkiñe Muñoz, program coordinator for the Ivory Coast of Anesvad, a Spanish organization that works in the fight against neglected tropical diseases.

Ivory Coast has joined the WHO roadmap for yaws eradication. In his plans he plans to carry out an assessment of the disease situation —clinical and serological investigation— and to have reliable data to plan therapeutic interventions in the communities, according to Muñoz. “In addition to collecting data, with the support of the Ministry of Health, we will also train health workers, but at the same time raise awareness and campaigns to detect early cases in schools: we go to educational centers and look for all those children who have any mark on the skin. If they can be treated directly there, we do it, or if the case is more serious, they are referred to a specialized center ”, explains the coordinator.

The Catalan researcher Oriol Mitjà was one of the scientists who in 2012 discovered that with a single tablet of azithromycin, an antibiotic for otitis and bronchitis, children with yaws were cured

This early detection work was also essential for Mitjà in the time he spent on the island of Lihir, in the middle of the Pacific Ocean, in Papua New Guinea, working in the field to learn about yaws and eradicate it. “What we found was that it was not enough to wait in the hospital to treat the children, but rather that we had to go look for them, wherever the roads ended, because the parents did not bring them. Many of them, poor people, who treated their wounds with traditional methods, did not know anything about the disease, they did not know what it was. And there you found children who, in addition to being stigmatized, were forgotten by their families and, of course, sad ”, says the scientist.

The Catalan researcher Mitjà, who was one of the scientists who in 2012 discovered that with a single tablet of azithromycin, an antibiotic that is usually used for bronchitis and otitis in the developed world, children with yaws were cured, he is immersed in a A new study, funded by the European Research Council, to try to show whether three rounds of the antibiotic are more effective than one dose for those patients who have demonstrated resistance to treatment. “If we can demonstrate this, it is a new step in science that has the potential to change the way we approach clinical practice,” he says. A discovery that could restore a normal life to those children whom the scientist saw abandoned in the bamboo huts in front of the Pacific beaches.