The difficult task of resuscitating Poopó, the Bolivian lake that died long ago 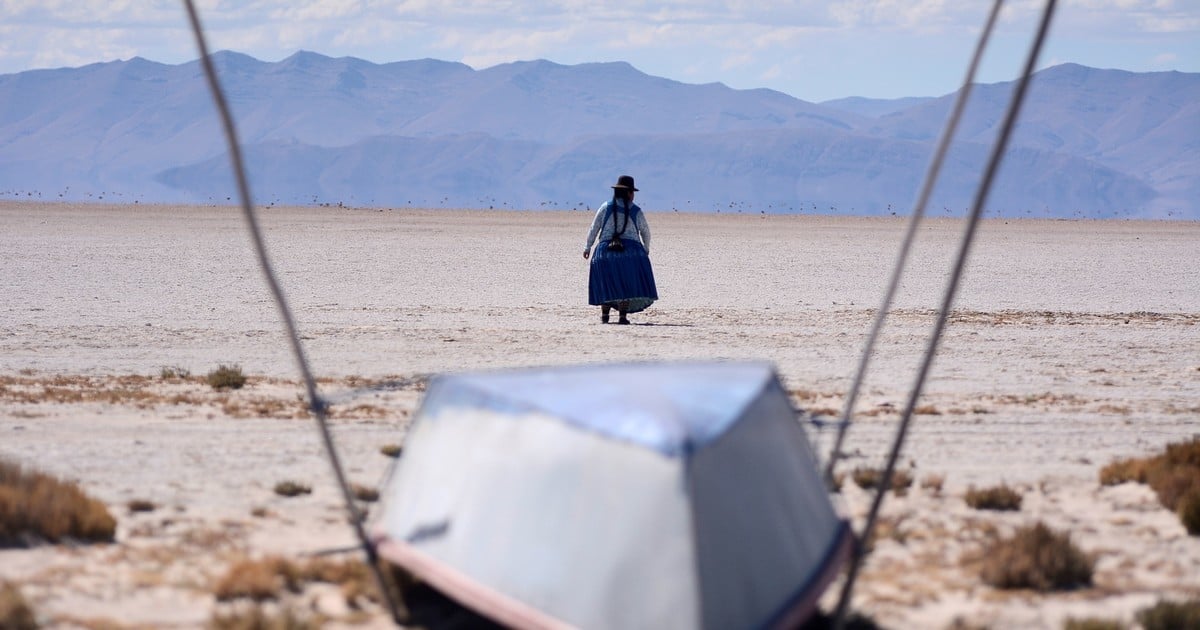 The Poopó, which was the second largest lake in Bolivia, now it’s nothing but a desert plain affected by sediments, the constant diversion of its tributaries and climate change that have reduced it to a poor seasonal wetland, something that for specialists is irreversible.

What remains of that water mirror located south of Lake Titicaca, shared by Bolivia and Peru, joined by the Desaguadero River, it is practically minimal compared to the historical records of the lake which was said to be up to 5 meters deep and a surface area of ​​more than 2,500 square kilometers.

Now the fishing “is nil”, The lake is “practically dry”, with the exception of the sectors of the mouth of the Desaguadero, and the life it housed in wet times has changed destiny, Limbert Sánchez, an activist and member of the Center for Ecology and Andean Peoples of Oruro.

The disappearance of the Poopó It is something that was already projected about a decade ago and became real a few years ago, said Darío Achá, a biologist at the Universidad Mayor de San Andrés de La Paz, who has studied the behavior of the lakes in that basin, such as Titicaca. , Uru Uru and Poopó.

On a motorcycle through what was part of Lake Poopó. Photo EFE

Achá maintains that the lakes “are not eternal” since their life span is around one hundred years and by a natural process they “tend to disappear”, a rule that is even more cruel with those like the Poopó, which is “very shallow”, although the exception is those with a lot of depth.

For this specialist “there is no way” that the Poopó will be the same as a century ago due to its “natural process” of depletion, in addition to the fact that now “it does not hold enough water to prevent it from evaporating”, “it has a large surface area and a small volume” together with a “more marked seasonality”, with more intense dry and humid times.

El Poopó “has become a seasonal lake many years ago, over time it will fill less and less and it will last less like a lake “, remarked the scientist.

“The fate of the Poopó was predicted, naturally it was a lake with little future prospects for the shallow depth and for the large surface“, Acha sentenced.

For Sánchez, Lake Poopó is going through “a series of problems” for a long time, which came to light when the Government of Oruro in 2015 made an assessment of the situation after declaring that it had completely dried up.

This activist identified that the diversion of the Mauri River, a tributary of the Desaguadero from the Peruvian side, the loss of flow of the latter by the farmers’ associations, in addition, of the mining activity in the area, which tends to divert water resources for the formation of artificial lagoons, are the main aspects that have affected what was the second largest lake in the country.

There is almost no fishing in what remains of the Poopó. Reuters photo

Sánchez also pointed out that all the sedimentation that has accumulated over the years and that has made the lake not a “deep dish” and the evaporation effect is greater, making it a “dry” and “salty” place.

In 2015, the Oruro Government announced a group of plans to “reclaim” Lake Poopó such as the dredging of the Desaguadero River, a water treatment plant, fish breeding programs, as well as tail dams, something that, however, has made little progress and has not been a “comprehensive solution” to the problem.

Although a total solution is not “realistic”, the biologist Achá maintains that certain works can be done “to rescue some of the ecological services” that the lake had based on the formation of channels or pools to moderate evaporation of water, assessing the risk that this does not cause the release of heavy metals.

The other possibility that this specialist raises is make better use of “seasonal water”, something that could be done in the northern part of the lake, which is where it receives its flow.

Along these lines, Sánchez considered that the work could be oriented to rescue “a part of Lake Poopó”, at least 300 square kilometers of the 2,500 that at some point he had, so as not to lose it completely.

Apart from this it is essential to think about the “socio-economic” and “cultural” consequences of the disappearance of Lake Poopó, warned Achá.

“What is going to happen has already happened to a great extent and is that people have to go “, ended.

Superliga: Madrid and Barça win another battle against UEFA