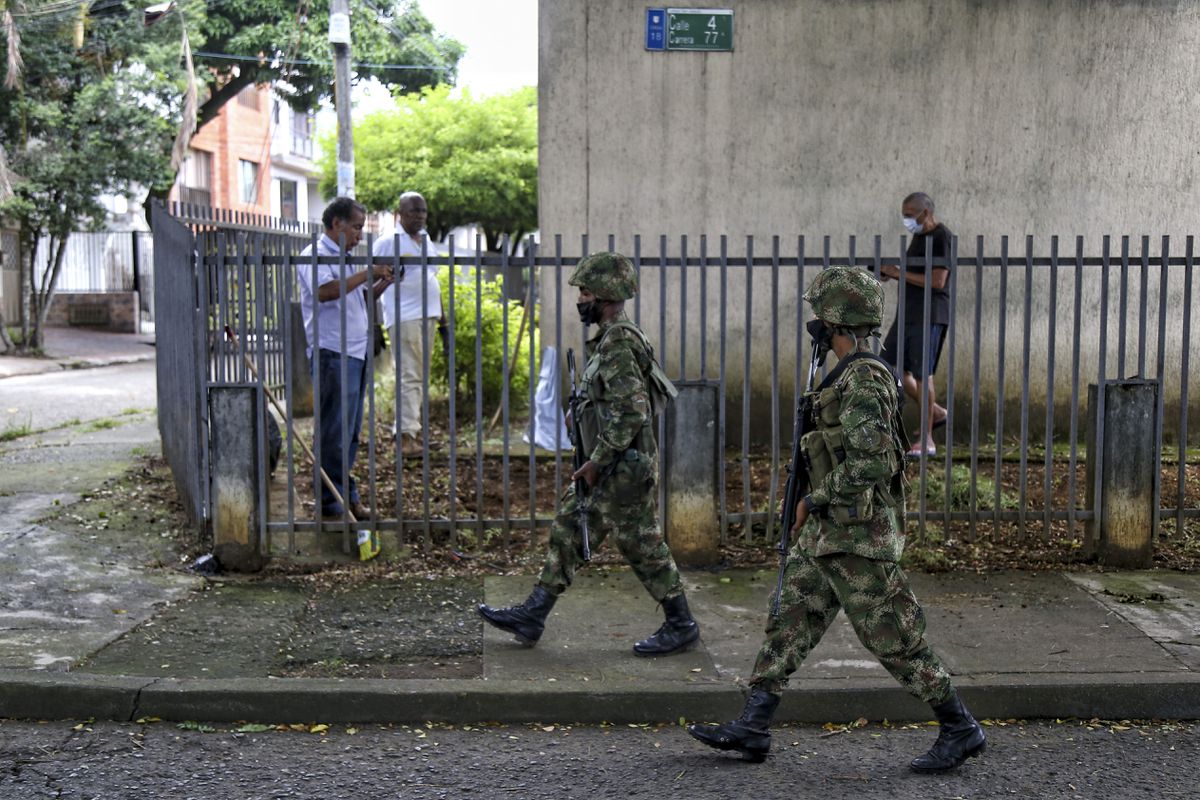 After a month of all kinds of marches, protests, riots and blockades against the government of Iván Duque, the president of Colombia has decided to take the military back to the streets. A measure that increases the differences with his critics in the face of the repression against the protesters. After a new day of chaos and violence on Friday, May 29, the president traveled that day to Cali, where there were more than a dozen deaths, and ordered the militarization of the city and the department of Valle del Cauca. Later, at dawn, in a decree he extended the figure of military assistance to the police for another seven of the 32 departments of the country: Cauca, Nariño, Huila, Norte de Santander, Putumayo, Caquetá and Risaralda. The decree also covers a dozen cities.

The measure, among other provisions, orders mayors and governors to lift roadblocks (barricades) by protesters. The Government has defended it as a necessity. “The blockades are not a form of peaceful protest. Although they are carried out without weapons and without attacking, they are in themselves a way of violating the rights of others (…) For this reason, the public force has to intervene in the unblocks, ”said the president in an interview with EL PAÍS . For several observers, the figure of military assistance, which is opposed by the national strike committee that seeks to open a negotiation table with the Government, hinders the dialogue and aggravates the crisis. The measure immediately provoked objections from human rights defenders, lawyers, opposition politicians and even some mayors, who are exposed to sanctions if they do not comply with it.

The chorus of criticism has started from the opposition. “The president is gambling by the option of force, and mayors and governors, who at some point could mediate in the conflict, are included by effect of the decree, because they are among those who have to give an eviction order,” he said. Senator Luis Fernando Velasco, from the Liberal Party. His colleague Iván Cepeda, from the Democratic Pole, has gone further, considering that “in practice, it is a coup d’etat”, since in his opinion it replaces the civil authority in much of the territory and normalizes the episodes of abuse and brutality police officers who have come forward. For the representative Juanita Goebertus, of the Green Alliance, “violates territorial autonomy, prioritizes military action over police in internal disturbances, the indiscriminate use of the curfew and de facto takes shock measures but avoids constitutional control.”

Having the military in the streets is also not welcomed by local rulers. “While I whether she is mayor, there will be no militarization of Bogotá, that is adding fuel to the fire ”, Claudia López hastened to warn, who has maintained a pulse of leadership with Duque on several fronts. The capital, however, is not included in the presidential decree. “This does not mean that there will be a militarization of the city,” says Juan Carlos Cárdenas, the mayor of Bucaramanga, a city in the east of the country that unexpectedly appeared on the list.

“We are going to guarantee the rights of all, those who protest and those who do not protest. When there have been acts of violence, we have acted with the police to guarantee public order ”, defends Cárdenas, who declares himself surprised by the inclusion of his city, in dialogue with EL PAÍS. “Bucaramanga has not had any loss of life, it does not register any disappearance or suffers a shortage of supplies. We could not understand the criteria, but it is a presidential order that must be followed, “he says. “Beyond the decree, we do believe that the path of this entire process of social protest to seek solutions, beyond the public force itself, is dialogue with the different groups that are protesting.”

The decree contains “a dangerous void”, has warned José Miguel Vivanco, director for the Americas of Human Rights Watch. “The orders issued do not include any explicit reference to prioritizing dialogue, avoiding excessive force and respecting human rights,” he pointed out, a serious deficiency “that may have irreparable consequences.” Several jurists agree with him. Rodrigo Uprimny, researcher at the Dejusticia thought center, points in the same direction. “Ordering the lifting of all the blockades by force,” he points out, is unconstitutional for several reasons, “Since many of them are protected by the right to protest, although there are others that exceed it for disproportionately affecting the rights of third parties ”.

The measure is “unconstitutional and inconvenient,” agrees Catalina Botero, who has been Dean of Law at the University of Los Andes and rapporteur for the Inter-American Commission on Human Rights (IACHR). “In a democratic state, you first use all the means at your disposal, and only when it is essential in blockades not protected by the Constitution, then you can intervene with the use of force,” he points out. The decree reaffirms the approach to the social outbreak that the Government has had, “by virtue of which it considers that it is a problem of public order, of bandits, of vandals, of people outside the law organized to destabilize the State. And therefore it is unaware of all the complexity and heterogeneity of what is happening in Colombia ”, which ends up fueling the tension.

The figure could only be used through a decree of exception that has a prior control of the Courts, something that the Executive obvious in this case, Botero values. “A democratic country cannot put the military out on the streets to solve public order problems if conditions are not met that are very exceptional,” he emphasizes. “These are very strong restrictions on fundamental rights. It is a way of circumventing a fundamental mechanism for democracy, which is the control of constitutionality ”.

For some critics, military assistance has been a hidden way of approaching the figure of internal commotion, one of the three states of exception contemplated in the Political Constitution of Colombia (the other two are foreign war and economic emergency) and that is used in the event of serious internal disturbances of public order. The president, with the signature of all his ministers, can decree it throughout the country or part of it in the event that the disturbance of public order “imminently threatens institutional stability, State security, or citizen coexistence” , and “it cannot be conjured through the use of the ordinary powers of the police authorities”, indicates Article 213 of the Constitution.

The declaration of this state of exception can only be made for 90 days and under rigorous political control by Congress and the Constitutional Court. In practice – as experts explain – it is a way of militarizing daily life and gives the president extraordinary powers, such as restricting the free movement of people in specific places and times or suspending the freedom of assembly. In no case, says the Constitution, “civilians may be investigated or tried by the military criminal justice,” nor may human rights be suspended.

The last time the internal commotion was decreed was in 2008, during the presidency of Álvaro Uribe, founder of the Democratic Center party. The then president had already resorted to the figure in 2002. Before, in 1992 and 1994, the liberal Cesar Gaviria had done it. But according to Mauricio Villegas, in his article A country in states of exception, Colombia lived under that figure between 1970 and 1991. Villegas recalls in that article published in the newspaper The viewer that during the government of Julio César Turbay Ayala (1978-1982) this state of exception became an “instrument of repression of illegal drug trafficking and subversion activities” rather than an instrument of control.