The death of George Floyd: the allegations are over and the jury is already analyzing the ruling against the police officer Derek Chauvin 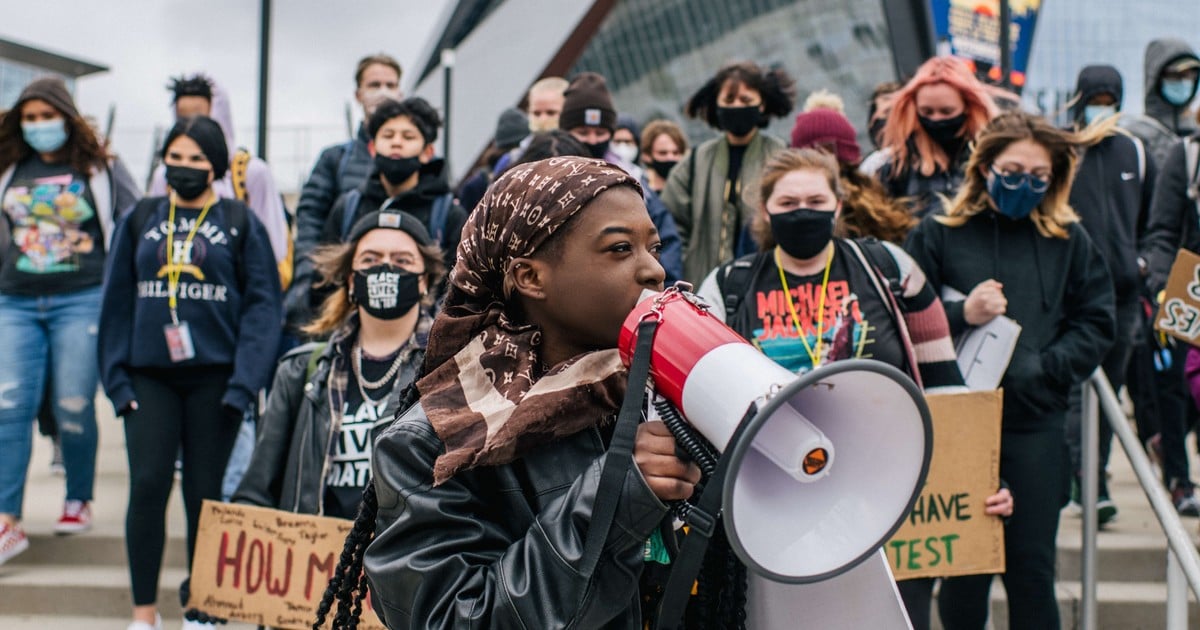 Those 9 minutes 29 seconds that shook the world returned to screens across the United States on Monday. The video of a white Minneapolis police officer crushing the neck of African American George Floyd with his knee to his death on May 25, sparking massive outbursts of protest against racism and police violence, he was once again the protagonist, this time in court, before a jury.

Heartbreaking images of Floyd pleading “I can’t breathe” were screened again in the final statement of the prosecutor of the trial against agent Derek Chauvin. After the parade of witnesses and the last presentations this Monday by the prosecutor and the defense of the police, the jury withdrew to deliberate to reach a final verdict, which could happen this week.

Out in the streets the tension was latent by the decision and for two other high-profile murders at the hands of the police in recent days. On the corner where Floyd, 46, died, and in the rest of the city, where buildings are still burned by the riots less than a year ago, Civil Guard troops had been deployed. Many stained glass windows have been bricked up pending the verdict.

Federal, state and local authorities are preparing these days to deal with an eventual wave of protests or demonstrations in the country once the sentence is known.

White House spokeswoman Jen Psaki confirmed on Monday that the federal government is in contact with mayors of major cities and governors to deal with what may happen once the ruling is known.

“This case will be a historic moment in the United States to examine the necessary police reform and racism in this country. And I think it will affect all democratic countries to take a close look at how their police are trained and how they respond to their citizens. Do we want our police to be the guardian of the people or the warrior against the people? “said from Minneapolis to Clarion Joseph Daly, Emeritus Professor of Law at the Mitchell Hamline School of Law. “Right now in Minnesota we are sad, angry, nervous and scared,” he added.

At the live televised trial by the main media in the United States, Minnesota state attorney Steve Schleicher summarized to the jury on Monday what the prosecution has been raising since the trial began on March 29: that agent Chauvin exceeded in the use of force, that Floyd died from lack of oxygen caused by the tightness of the knee in his neck and that he was not given any kind of medical help before the paramedics arrived.

The video, the key

But for that he showed them the video again, so that the members of the jury could observe it again with all the elements that they had seen in the trial in the head. “Use common sense”the prosecutor asked them. The way the agent acted “is not the way the police are trained, following the rules.”

“George Floyd begged until he could speak no more”continued the prosecutor, and said that Chauvin “all that was asked of him was a little compassion and he did not show anything that day.”

The defense, led by attorney Eric Nelson, argued that Floyd’s death it was for other reasons, such as underlying diseases, high blood pressure, opiate use and stress of the moment, among others. And that Chauvin had acted in a regular police procedure because Floyd, who had been arrested for allegedly paying with false $ 20, had resisted.

After hearing the arguments of the parties for the last time, the members of the jury made up of 14 people they isolated themselves in a hotel to analyze all the evidence presented in the trial and arrive at a sentence that is estimated to be in the next few days, but that could be extended if unanimity is not reached.

The former agent is charged with the crimes of murder in the second degree (when the defendant intentionally kills someone, but without premeditation, or when there is no intention, but violence is used to commit the crime), punished with up to 40 years in prison.

Also of murder in the third degree, with a maximum sentence of 25 years, which requires death to occur involuntarily, without premeditation, but due to irresponsible or reckless action, as occurs in many traffic accidents in which a pedestrian is killed. A third charge he faces is homicide, which carries up to 10 years in prison, which would imply that Floyd’s death occurred as a result of police negligence.

Chauvin, 45, has pleaded not guilty of all charges and used his constitutional right not to testify at his own trial. This Monday he was seen as always in the place, with a gray suit, behind a plastic screen to protect himself from the Covid.

The process occurs at times when tension builds in the country for two other high-profile police crimes.

Daunte Wright, a 20-year-old black man, was shot and killed in a Minneapolis suburb on April 11 by a white police officer who apparently mistook his gun for his Taser, and a 13-year-old boy was killed by police in Chicago. . The Wright assassination It sparked several nights of protests in the city and before the verdict in the Chauvin case, National Guard troops were deployed in the city, where many businesses covered their windows as a precaution.

“We are very concerned about how our police treat our minorities; and what the results of this trial will mean that works as a test for the safety of our city. We are worried. This case forces all of us in Minneapolis, Minnesota and the United States to ask ourselves, who are we? I believe that we must change in this democracy in order to save ourselves. We need a new paradigm to deal with the police, democracy and racism. This case should be the beginning of a necessary change in the US, ”added Professor Daly.

Withdrawals The share of the fitness equipment company Peloton Interactive started to fall, with the retraction of treadmills in the background