The day the ground sank in Puebla: “We heard a crash and ran!” 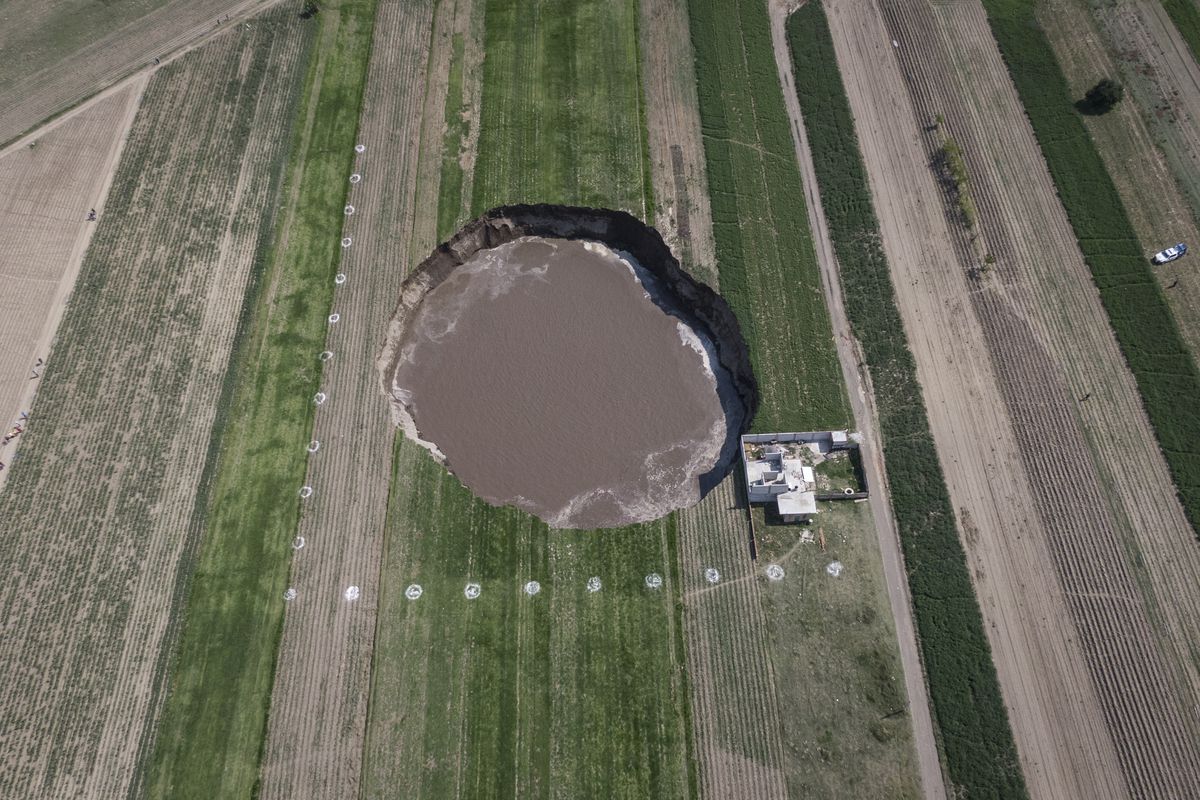 On a mound located a few meters from the sinkhole that since Saturday has kept the inhabitants of Santa María Zacatepec in anguish, in the State of Puebla, Magdalena Xalamihua sadly sees how the work of several years is about to be swallowed up by the earth. This woman, her husband and two children had barely completed a year and two weeks after moving into the house they built with great effort, when on Saturday they had to evict her: at 6:30 in the afternoon a strange hole began to open next to the house, as if a fictional monster sucked from the bottom of the earth. It started out as an eight-meter hole, but grew disproportionately until, hours later, it became a gigantic concave, from which water gushed out as in a biblical miracle. “We heard like a roar,” says Xalamihua. “We thought they were rockets, but we looked out into the street and saw how the earth moved and water came out, which made like waves. We ran away”. The woman still remembers with horror what happened that afternoon. He looks bitterly at his house, a brick construction that looks out into an abyss. “And now where are we going to live?” Above his head, a huge gray cloud threatens to unleash a storm, giving a more chilling view of the Zacatepec gap.

Local and federal authorities have come to this Puebla phenomenon in surprise. The National Guard has cordoned off a large area around the sinkhole and the military is ensuring that onlookers do not try to cross the prohibited area. Because there are curious and by the dozen. People come moved by the press reports, which has covered it with the same spasm that engulfs even the scientists, who since the weekend have been racking their brains to explain what has happened in this small community of farmers. Until Saturday, life here passed without major setbacks other than worrying about the rains and good weather to guarantee corn and legume crops.

Xalamihua explains that on May 15 they turned one year after moving and last 16 their daughter, María Lisbeth, was 13 years old, so they decided to have a double celebration with cake and a family meal. It was the achievement of more than a decade of work: the woman and her husband, Heriberto Sánchez, had worked hard, he as a masonry assistant and she in a local dining room, to buy land and build the long-awaited home. A migrant from an indigenous region of Veracruz, Xalamihua hoped to start a new life in Puebla, in a promised land, rich for its fertile volcanic soil and free from the violence problems of his native state. “We collected up to 3,000 pesos a month to finish paying for the land,” Heriberto explains. The deprivations were many, because almost all the money went to fulfill the Puebla dream. But it was cut short in a nightmare by the sinkhole and now the anguished family hopes that the state authorities will help them in the face of their misfortune.

So far, Governor Miguel Barbosa has not visited the area, but has admitted that it is “a matter of enormous risk.” The highest Puebla official has promised his governed that he will “be aware” that a human tragedy does not occur. “It is a geological fault that must be attended to with great care, with technique and with all the precautions”, explained Barbosa. Teams of geologists from the Autonomous University of Puebla are already preparing a report of what happened, with the experience they have from studying for years the sulfuric awakenings of the Popocatepetl volcano, the giant that dominates these extensive plains. Authorities say a technical report could be ready in 30 days. But Puebla scientists are not the only experts who have set their eyes on the Zacatepec hole.

The gigantic sinkhole in Puebla, in images

Delfino Hernández is a geological engineer at the Geological Risk Laboratory of the Universidad Autónoma Metropolitana, UAM, in Mexico City. Hernández is preparing to travel to Santa María Zacatepec for the weekend with his team and study what happened, which he has followed closely due to information in the Mexican press. While waiting to be able to study it in Puebla, the scientist explains that it is a natural phenomenon, an active fault that was waiting for an impulse from nature to show its power abroad. “These faults already exist inside the soil. They can exist for 5,000 or 10,000 years and then they are reactivated. It only needs nature to give it an impact for it to be discovered on the surface. This phenomenon, as I have seen it, was going to happen sooner or later ”, explains the expert. Hernández says this type of phenomenon occurs because in certain areas the soil registers “weaknesses”, areas that are in constant motion. He assures that it is not something that happens without “warning”: geologists can be aware of fissures or small fractures that can later trigger events like the one in Zacatepec. “A fault is a zone of fractures along which there has been displacement of the rock crust blocks. It is a discontinuity that is formed due to the fracture of large rocks in the earth. If it is said that this fault is 20 meters long, which is what can be seen, it is likely that it will have a greater depth downwards ”, he adds.

But what could trigger what happened in Puebla? “The State commonly has earthquakes that occur before they reach Mexico City. We do not know with precision if the 2017 earthquake generated sequelae, but taking into account the size of the fracture it may be that the soils are damaged and only moisture is required for them to be detached ”, he explains. The hole has been filled with water, he adds, by underground leaks. This geologist affirms that in Puebla no geotechnical studies or geological hazard maps have been carried out, which is why the sinkhole has been so surprising. “What you have to do is see not just the opening, you have to see the environment, look for other similar or minor fractures. Make an immediate study, cartographic mapping with photographs of areas and continue monitoring if it is moving daily ”, he recommends.

While scientists investigate what happened, Santa María Zacatepec has become an attraction for the people of Puebla. Police have had to close the dusty lane leading to the sinkhole to prevent cars from clumping together on land that has already proven to be fragile. People attend as a family to witness the phenomenon. Many are disappointed upon arrival, because the area has been cordoned off and only a long black spot can be seen in the distance.

Nicasio Torres is 62 years old and has lived his entire life in Zacatepec. He claims that he had never seen anything like it and shares the fear of his neighbors: “We fear that it will continue to advance,” says the old man, who has arrived on an old bicycle. “What will happen to us? Evict us? We have nowhere to go! ”He complains as a woman with her children offers candy to the curious. At his side Jorge, a large man who lives near the area, says that there is a general concern about the sinkhole in the residents that border Zacatepec. “Where I live people wonder why this is happening worried. We do not know what to do. We can only wait for the authorities’ report, ”he says. Visitors also follow the reporters who cover the phenomenon, eager to obtain some information that satisfies their curiosity: What do you know? Is there already a study? Have you talked to experts? Will the authorities do something? A reporter flies a drone and around her are crowded with women, children, the elderly and men desperate to see the aerial images of the giant hole.

Xalamihua is desperate for so much gossip. She asks people to understand her case, because she is tired of being overwhelmed with questions because she and her family are the most affected so far by what happened in Zacatepec. He knows that he has lost his home forever, his children’s heritage, and his anguish now is to know where they will live. He wants the mayor, the governor, the president to do something for them. “It is very strong and sad. It stayed there all our lives, ”he says with reddened eyes. The black cloud above it begins to launch huge and large drops that form small concaves in this treacherous ground and in the distance, in the sinkhole, the wind furiously stirs the waters of the new Zacatepec lagoon.