The Darien jungle, a route of death for Haitian migrants 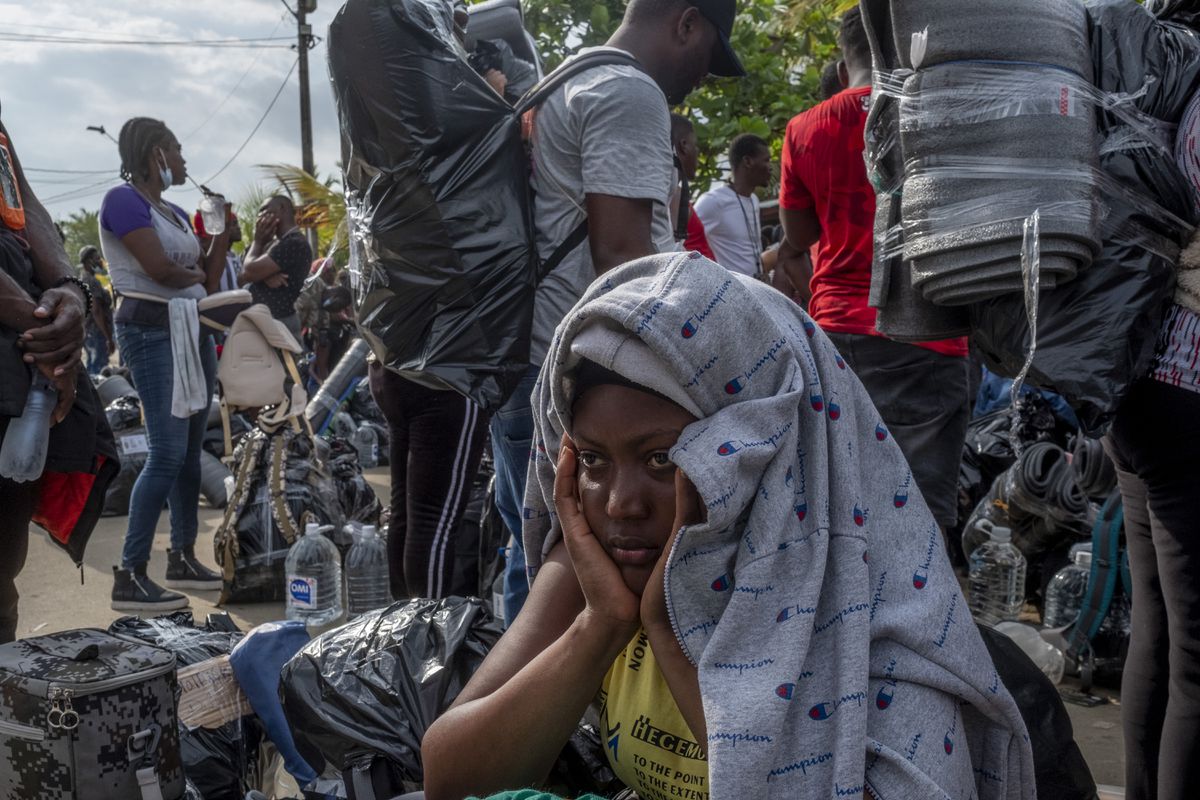 “Salomon died this week in the jungle.” Jeff Sagasse, a Haitian with an almost perfect Spanish, tall and tongue-in-cheek, blurts out the phrase with cold resignation, as if it were an inevitable destiny. Sitting in a restaurant in Necoclí, a coastal town in Colombia where more than 10,000 migrants have gathered waiting to cross into Panama, he takes out his cell phone and shows a picture. Raymond Salomon, wearing a wide-brimmed red hat, looks at the camera. On his photo, a drawn cross and a message in Creole: “It was with great regret that I found out about this news. Rest in peace, friend, “writes a Haitian resident in Chile in his whatsapp status. They say he was 42 years old and a bricklayer, who tried to cross the impenetrable Darien jungle with eight relatives and drowned in a swollen river. That no one could help him. The jungle swallowed his body. “El Salomon was an excellent construction worker, before going I told him to take care of himself. But it left us, ”says Irvens Norvilus, another Haitian who is about to travel to Darien, from Chile.

The authorities do not know with certainty how many migrants have died trying to reach Panama, just one step in the long journey through Costa Rica and Mexico to reach the United States and achieve their American dream, but those who have crossed say that the Darien Gap, At 500,000 hectares, it is one of the most dangerous crossings in South America. That this humid and closed jungle is a cemetery.

The dangers come from all fronts and Haitians know it. But they avoid mentioning it. Others feel they have no alternative. “Yesterday I cried, I called my family, but my sister told me: do anything but don’t go back, you’ve already got there, go on,” says Surys Rivera, a Dominican who travels with a group of Haitians, while buying a bottle of creolina , a disinfectant that supposedly drives away snakes and other jungle animals. In her suitcase she already has three inhalers because she is asthmatic, pain pills and few clothes. He left from Chile, crossed Peru, Ecuador and Colombia and has been giving it away on the way to lose weight. He leaves us his cell phone number to tell about the journey he has been on for two days. Still not responding. Migration is an open question, a WhatsApp with no signal or answer.

From the Caribbean neighborhood to Villa Haiti

The Necoclí dock is bustling. Like many days since July, thousands of Haitian men, women with children in their arms line up to get on a boat and leave this coastal town of 70,000 inhabitants (20,000 in its urban area), where they have been for several days, towards Capurganá, the last place before entering the Darien jungle.

African music fights with the Colombian vallenatos on a loudspeaker, a vendor reads the names of the migrants who have obtained a quota and counts to 11, through a megaphone. He asks to put on the masks but nobody pays attention to him. The humid heat suffocates. A Haitian couple carrying a baby cannot get on the boat. They come from Brazil and do not speak Spanish. They could not buy the ticket to travel in commercial companies and will have to wait another day or venture in illegal boats. The grief is noticeable in their eyes, but they cannot express it either.

A few blocks further, another huge group of Haitians try to crown space on a boat. Villa Haiti has called this area where about a thousand people gather every day who leave in legal boats. According to Panamanian authorities, 18,000 migrants entered their country in July alone. Haitians are organized by groups of families or friends, neighbors who say they may be able to help them in the jungle. One day before each trip, they send a leader to buy tickets, but they don’t always get enough and at the time of the trip, the neighborhood unit breaks down.

– ”All children over 2 years old pay. We need to put 92 people in and there are 94. The only option is for one person from the group to get off, ”says a Colombian who organizes the boats. “It’s humanitarian aid, but it’s also business, Daddy.”

The migrants pay $ 55 for a trip to Capurganá, they go with life jackets and in good condition. Their suitcases protected with bags and marked with their names. But the ticket costs little more than double what a tourist who visits that place pays. In Necoclí, the risk of life for a migrant is calculated in dollars that circulate throughout the town and have also reactivated their trade. The more money, the less risk, they say. Although the reality is different.

Those who have more money and fear the jungle, prefer to pay for illegal boats, which leave on dark and not very windy nights. They give up to $ 450 per person to coyotes, as migrant smugglers are called, who take them directly to Panama, by sea. “Eight days of unsafe walks, abysses and robberies are avoided”, says a local source.

“Sadly, it has been believed that the problems are the animals, the greatest danger is criminals who violate the rights of others”, confirms the director of Migration Colombia.

The sea that swallows migrants

But the sea also swallows migrants. In January of this year, a boat with Haitians was wrecked in the Bay of Pinorroa, on the Colombian side. They found three bodies, including that of a six-year-old girl, but four other migrants are still missing. Earlier, in 2019, another 21 Africans died, a one-year-old baby, among them. “The fact that it is irregular migration hides the deaths. The same thing happens in the Darién plug ”, says the director of Migration Colombia, Juan Francisco Espinosa.

In all cases, the migrants pay “guides” who charge them $ 120 for each one and offer them security in an environment of violence and armed groups such as the Clan del Golfo. “I ask those people who think to come not to do so, not to come, there are many dangers in the jungle. They took my belongings but they left my life. The guides left us dumped on the second day, ”says a Venezuelan who has already crossed El Darién. They are exposed to robberies, rapes and murders, according to several testimonies that circulate on the beaches of Necoclí among them.

An effect of the pandemic

The origin of this humanitarian crisis is old but triggered by the coronavirus pandemic. After the earthquake in Haiti in 2010, many migrated to Brazil and Chile. But the economic effects of the quarantines in those countries made them resume their activity throughout the continent. “I had a nightclub that closed with quarantine,” says Sagasse, 26. Dressed as a basketball player and with a gold chain hanging across his chest, he says he would like to speak with the president of Colombia. “We need good transportation, a humanitarian passage to Panama. We don’t want to stay in Colombia, we just want to go and continue to the United States or Canada ”.

The agglomeration of migrants in Necoclí has ​​been classified as a health crisis. Children, says a doctor from the municipal hospital who attends for free on the beach, usually have diarrhea and adults, the flu. From Covid. 19, little is said. Nearby, a post from the Family Welfare Institute delivers nutritional supplements to pregnant women and children. But the aid ends there.

Rumors circulate like the wind from the sea and migrants cling to any slightest certainty, an image, an audio of who managed to reach the other side of the border. When they are not upset with journalists they come to ask about the possibility of a humanitarian step. “What is known, is it true that they will only make one for Cubans and Venezuelans?” Asks Julio Chacón, a Cuban who left for Suriname, arrived in Venezuela, went to Colombia and now works as a waiter to pay for the passage in the jungle.

The same wait for a group of Venezuelans, who came to Necoclí on foot, and live in tents on the beach. Led by Saida González, a former Venezuelan military officer who cries every time she talks about her uniform, they also implore for a corridor to allow them to reach Panama safely. “We know of rapes, robberies and deaths in the jungle,” says the lady about videos that have come to them from compatriots in which they show some deaths.

The Colombian and Panamanian authorities have decided to explore humanitarian avenues for “the orderly and safe passage of migrants.” On Monday, he said, the Panamanian Foreign Minister, Érika Mouynes, will visit the Colombian boarding area to determine a quota of migrants that can be received in an orderly and safe manner. “We do not want migrants to have the risk of drowning or passing through the Darien, where they have so many risks. There are many children and women, ”adds the Colombian counterpart, Martha Lucía Ramírez.

For many, like Salomon or the baby from the Democratic Republic of the Congo, who died in 2019, it has been too late. The same as for Surys who, if her asthma did not leave her on the road, she is on her fifth day of travel.

As those decisions become realities, migrants don’t stop. Guerlande Lesperance is 21 years old, with a small body and a lot of fear: she cannot swim. Days before embarking on a boat that would take her directly to Panama, she was assailed by the fear of drowning, that her family would see her sink and that no one could do anything. “There are many people who died in the water crossing, I would not want to see that,” he said. Like many others, he left his cell phone number, but he still hasn’t answered.

BofA debuts program to move further away from overdraft fees

Formula E: say hello to Mercedes too, it will be released before Gen3