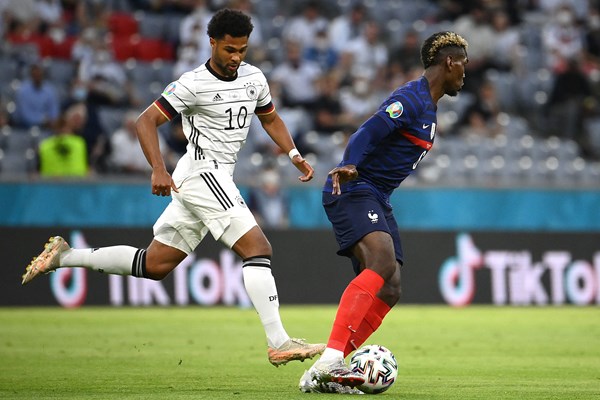 Today, Friday, Serge Gnabry returned to the group training of the German national football team, while coach Joachim Loew is putting the final touches on preparations for the upcoming confrontation with the Portuguese national team tomorrow, Saturday, in the second round of the group stage matches of the European Nations Cup “Euro 2020”.

Gnabry, the Bayern Munich winger, who contributed strongly to the Bavarian team’s achievement of the hexagonal last season, underwent individual training yesterday, Thursday, but today participated in the team’s collective training in its camp in Herzogenaurach, before heading to Munich, which hosts tomorrow’s match against the Portuguese national team holder Title.

Gnabry appeared in training with his left knee wrapped in medical tape, but there are no doubts about his ability to participate in tomorrow’s match.

Loew’s list includes 24 players ready to participate, as Leipzig’s Lukas Klostermann is absent due to a muscle injury, and Jonas Hoffmann continues his solo training due to a knee problem.

The German team is facing pressure before the Portugal match, after losing its first match against its French counterpart 1-0, while the Portuguese team opened the title defense campaign by defeating its Hungarian counterpart 3-0.