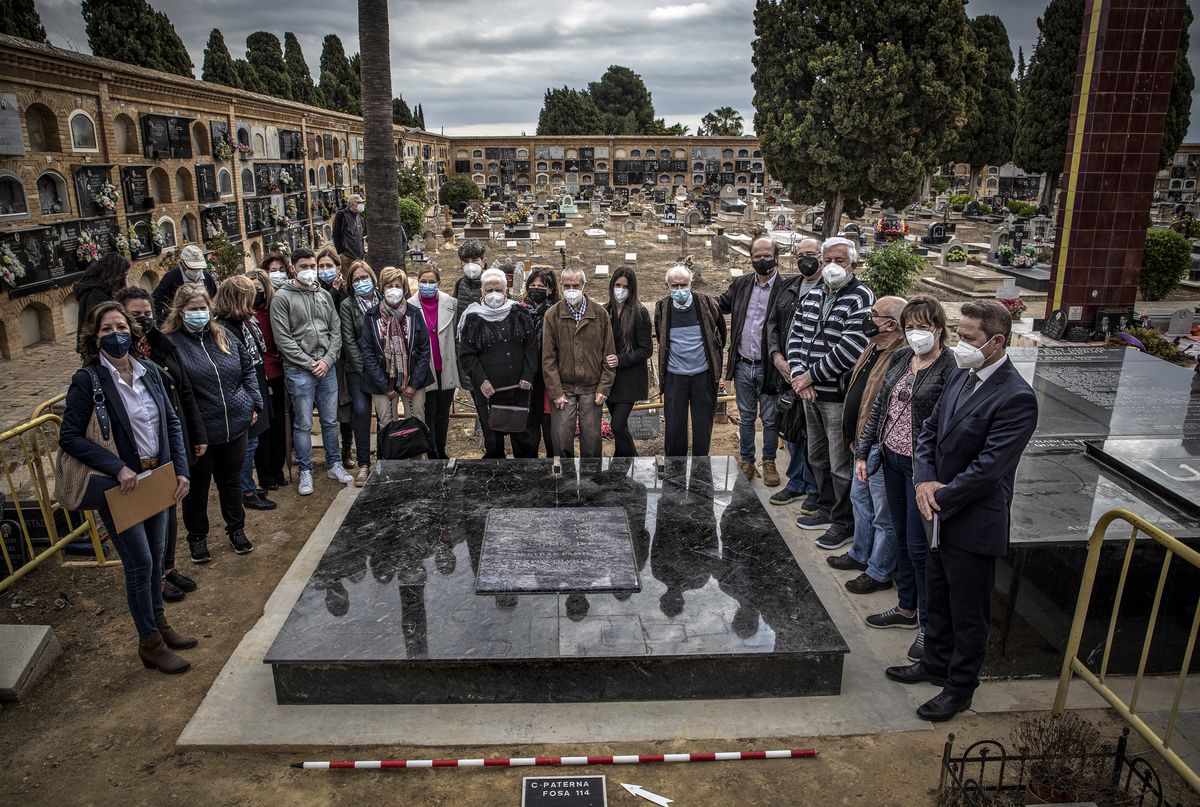 80 years, 10 months and 4 days. That is the time that has elapsed since on June 28, 1940, grave 114 of the Paterna (Valencia) cemetery became the culture pit. The shot bodies of teachers, journalists, editors, representatives of cultural entities, illustrators, mayors, councilors and magistrates, among others, were abandoned in a hole in the ground, just over 50 meters from the entrance to the necropolis, where the sun day in the morning. This has been a Monday without sun, with rain, but rewarding and bright for dozens of families.

The association of relatives of the almost two hundred victims of Franco’s retaliation in grave 114, after many years of demands, has achieved its objective: to initiate the process of exhumation of the remains of their grandparents, uncles, parents, in some cases to be able to bury them with their families. There is a possibility that the depth of the pit and the humidity will cause the remains to retain some clothing, personal items and even some physical feature. The process has been possible thanks to the assignment of the Delegation of Historical Memory of the Valencia Provincial Council, headed by Ramiro Rivera, which has an annual budget to finance the excavation of graves at the request of family members or municipalities.

Like a prolonged thunderclap, the jackhammer that has finished off the thick marble tombstone that was laid more than a decade ago has sounded. This has revealed an older one, made of ceramic, commissioned in the sixties, with five dates; the days of the five rounds of executions, between May 9 and June 28, 1940, with which the grave was filled to form one of the largest in Spain. “Someone wanted that day to give an example,” says the president of the Group for the Recovery of Historical Memory, Matías Alonso, referring to the last date, when 31 people were murdered, who will be the first to recover once they are start locating the remains.

In that first shift, the remains of Isidro Escandell, secretary of the Valencia Mercantile Athenaeum, a socialist militant and vice president of the Valencia Provincial Council; Carlos Gómez Carrera, cartoonist of The Traca, known as Bluff or Manuel Contreras, painter and councilor of Godella.

More will have to wait for the daughter of Juan Álvarez, one of the few direct descendants of the reprisals of grave 114. “It had to have been before,” she whispered excitedly, at 82 years old, when the tombstone began to crack. The mask has kept the pain from seeping out of her face, but the watery eyes have been more eloquent. Now he’s just in a hurry. He fears that age, or covid, will not let him pick up the remains of his father. He remembers how his mother asked them not to visit the pit. “Never go, there are very bad people there,” he said. And it is that, as the granddaughter of the executed person remembers today, on one occasion she was threatened: “As you come more, you end up inside with him,” they told her. They will also have to wait for Vicenta and Sari, granddaughters of Rafael Olcina, shot on May 9, 1940. His only living son resides in Stockholm and this Monday he could not be present at the opening of the grave, “but he will come if they locate the remains ”, because the family has already carried out part of the DNA collection and analysis process to speed up, as far as possible, the identification.

In their case, belonging to the family association has not only served them a certain relief, when verifying the dozens of people who, like them, sought to recover the bodies. One day, in the WhatsApp group with which they coordinate, they sent a photo of some espadrilles, one of the few memories they have of their grandfather and they immediately had an answer: “I just had a cramp through my body. My heart is racing. Those espardenyes My grandfather made them with thread, ”wrote another member of the group. And the thing is, Rafael Olcina, from prison, where he spent almost a year before being shot, commissioned a pair for each of his children, and Vicenta and Sari keep them as relics.

Less will have to wait Carmen and Carlos, grandchildren of Manuel Contreras, painter and councilor of Godella for 23 days. He was one of the more than 2,000 shot in the wall of Paterna. Both currently run the family association, but not even the protocol of the day has made them forget the story of their grandfather and the letters he wrote to his grandmother on cigarette paper during the year he was incarcerated before he died. Or Conchín, granddaughter of the only woman who is registered in the grave, Dolores Arnal, a sewing teacher. His crime like everyone else, assassinated a year after the war ended, it was none other than belonging to the CNT and being a republican. Or have an exiled brother, like Enrique Beltrán, a bricklayer by profession whose mother was not allowed to even visit the hole in which he was put, pit 114.

“Saved” in a concentration camp

One of the people buried in grave 114 of the Paterna cemetery is Isidro Escandell, secretary of the Ateneo Mercantil de Valencia, a socialist activist and vice president of the Valencia Provincial Council and a journalist. Among those who have approached the cemetery this Monday, there were none of their relatives, but there was someone who was vehemently looking for them, for them or for some sign that allows them to locate them. David Coronado is the grandson of Vicente Verdeguer, a man for whom Escandell served as a mentor and friend. “This is what he would have done,” says Coronado, who is aware that his grandfather could have been one of those shot if before the end of the war he had not gotten into a ship that ended up docking in Oran. At the age of 25, Vicente Verdeguer was locked up in a concentration camp in Algeria. He was chipping stones for years until he was released, around the year 42. France granted him a residence permit and he ended up befriending the consul in Oran, who made his file disappear from the Salamanca archive. But until well into his sixties he did not dare to fulfill his obsession, to return to Spain, even though he knew that his trace had disappeared. “Your friend has had an accident and has died. A man so familiar and so good, because he died on June 28, 1940 at five in the afternoon, ”Verdeguer’s mother wrote to her son in July of that same year. “I thought of you, and that as you always went with him, it would also have touched you because you always went together,” he told him in a letter full of euphemism for fear of censorship. Now, his grandson is looking for Escandell’s relatives, “because that is what my grandfather would have done.”