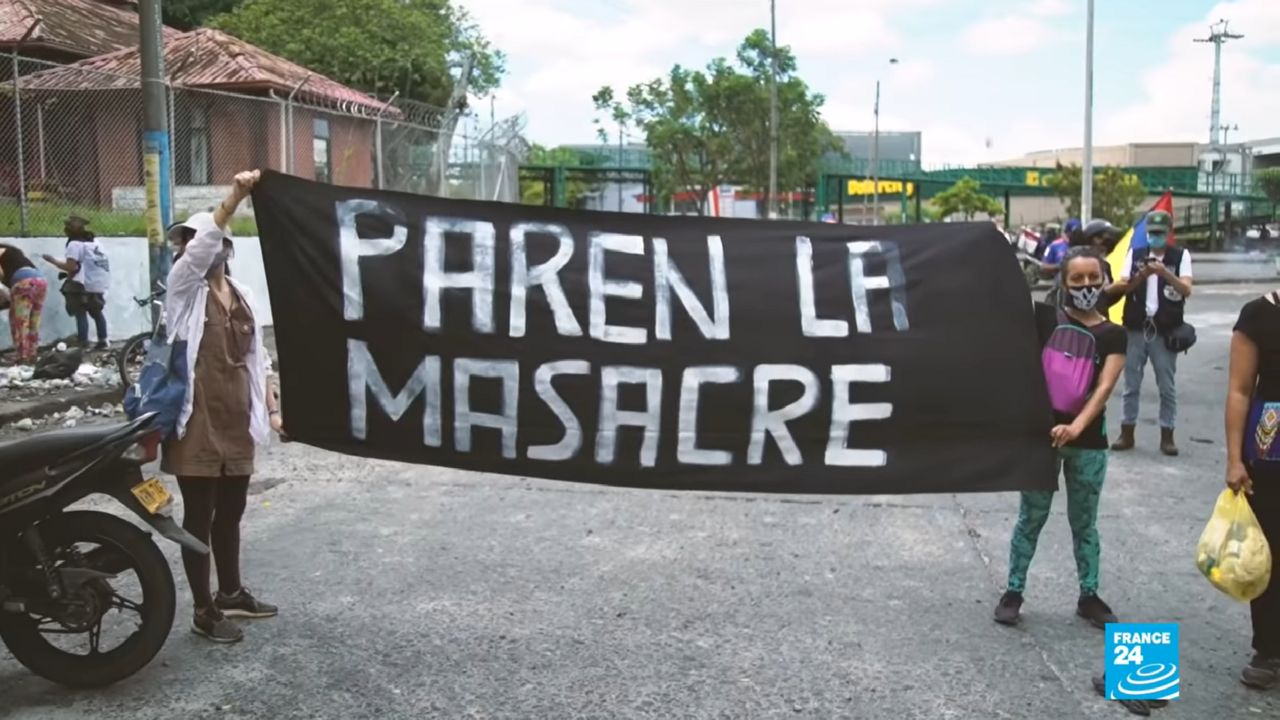 The night of May 3 will remain in memory for the inhabitants of Siloé, in Cali. Three young people died, according to the community, in one of the bloodiest days since the protests began in Colombia against the tax reform of the Government of Iván Duque. The outbreak reaches popular neighborhoods, with a great social fabric, that shout against inequality.

The entrance to the Siloé neighborhood in Cali is closed to traffic. 50 meters before the main roundabout there is a police station. The tension in the environment makes all the people who pass by the place look behind them.

To enter the roundabout, a group of social leaders and human rights defenders from the neighborhood comes out to meet us. Safety for journalists at the Cali protests is at risk. Between April 28 and May 3, the Foundation for Press Freedom (FLIP) collected 76 journalists who were victims of attacks. 62% were by the public force and authorities.

There are several hundred people in the gazebo. They are gathered for a tribute to the victims. On Friday night, neighborhood leaders say that three young people died and around 20 were wounded by gunshots. Neighbors who come, light candles, bring flowers and leave messages to stop the violence.

There is little press. Some independent media and a public television team. The presence of an international media attracts attention. The neighbors of Siloé want to talk. It is the request of attention for a community accustomed to oblivion. It is demonstrated by a devastating fact: 1 out of every 5 children in the neighborhood lives in extreme poverty.

Siloé, a neighborhood born of the armed conflict

Siloé is a neighborhood on the hill. The houses go up the mountain of Cali. It began as an invasion, created by displaced by violence, among whom are a large number of indigenous and Afro-descendants.

The social fabric was the only option for the neighborhood, which over time became politicized and had the presence of the urban guerrilla of the M-19. In 1985, there was already a military operation called “Cali, Clean Christmas”. They wanted to end the presence of the armed group. The result was 17 dead, mostly civilians. For David Gómez, the neighborhood’s social leader, the night of May 3 reminds him of that day.

Through a loudspeaker, different spokesmen try to find comfort, while a mother, who has lost her son, hugs Francia Márquez, activist winner of the Goldman Prize (the Nobel Prize for the Environment) and candidate for the presidency of Colombia for the elections of 2022. The tears of a society too accustomed to mothers being orphaned of children fall from their eyes.

Neighbors criticize neglect, but also discrimination and police violence. Many young people like Lizz give off anger in their statements. She assures that she is tired of cleaning the blood of her own.

The use of weapons in Cali

Debris is on the scene. And also bullets. They show us one. But it is not a pistol, it is a long weapon. Videos from social networks show shots by the public force in the neighborhood. The police report that there is also possession of weapons in Siloé and that they have been shot.

Gustavo Gutiérrez, founder of the Biblioghetto social initiative, explained the context like this, on Twitter: “They have unleashed a war. They forget that inside Cali there is an armed substate, with anger and with a lack of opportunities ”.

They have started a war. They forget that inside Cali there is an armed substate, with anger and with a lack of opportunities.


The journalist, and former partner of France 24, María Camila Hernández, agrees. For her, the causes of what happens in Cali come from poverty, discrimination and inequality. Causes for which a neighborhood hairdresser, at a moment of the tribute, wants to answer: they just want to work.

In this context of social tension, in addition, weapons surface, in a city that was one of the main centers of drug trafficking operations in the past. Weapons that are also found in neighborhoods with the highest purchasing power.

Videos have been seen of residents of the wealthy neighborhood of Ciudad Jardín, with high-end trucks and white t-shirts, carrying weapons. They assure that, to defend themselves and avoid the shortage of a city, where food, gasoline and medicine are already in short supply.

The tax reform angered the most vulnerable populations

Colombia is the second most unequal country in Latin America, after Brazil. And the pandemic has generated an economic crisis, which has increased the gap, leaving 15% unemployment in 2020, in a country where labor informality is close to 50%.

The protests began on April 28, against a tax reform bill, presented by the government of conservative Iván Duque, which affected the middle classes, mainly, but also in basic services to the popular classes.

It was the straw that broke the camel’s back, for some young people, who in Siloé, are willing to continue with the protests, they assure, until it is necessary, and even if it costs them death.