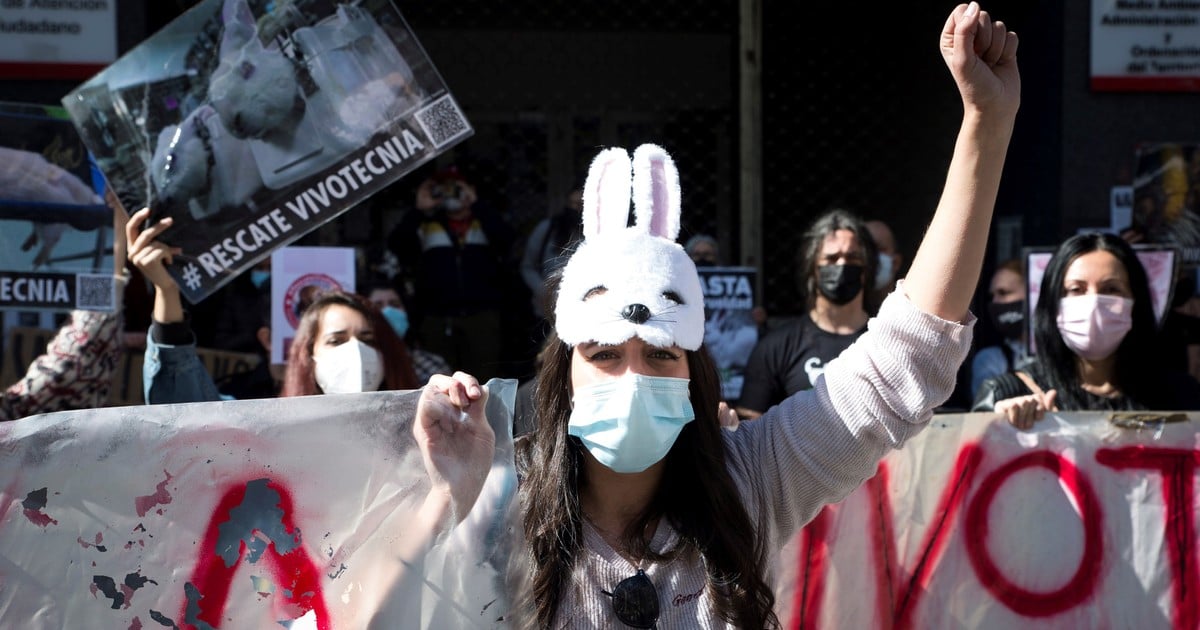 The images of the activity that took place in the Vivotecnia laboratory in Madrid have gone around the world and have caused a wave of indignation. Rabbits, dogs, mice, and pigs are unceremoniously handled and forced to test against his will in the middle of an apparent routine that is not interrupted even when the animals appear dying. These are scenes so stark that the observer has barely had time to look away when the sight of animal suffering immediately gives way to nausea.

With these images in mind, the veterinarians of the Community of Madrid They have entered the laboratory facilities this week to inspect it and check the status of surviving animals.

The Community of Madrid decided to paralyze the activities in the center, while the matter has entered the courts. The recording bears the signature of Cruelty Free International, an organization dedicated to the defense of animals that, together with ADDA (Association for the Defense of Animal Rights), has filed a complaint with the court.

Carmen Méndez, president of the ADDA association, maintains that the reality shown in the video It is not an isolated incident. And he predicts that the appearance of similar recordings from other centers will depend on the “conscience, ethics and professionalism” shown by other professionals, given the social reactions provoked.

“I don’t know if what we have seen happens a lot or a little. But what we have found is that in all the facilities that are hermetic and without the possibility of being seen, there are abuses with animals ”, says Mendez. According to her, it is something that is repeated not only “in experimental laboratories, but also in slaughterhouses or in the transport chain” of animals.

Carlos Contreras, a lawyer who represents the complainant entities, also believes that “it is probable that in the day-to-day life of laboratories in Spain there are situations involving crimes with animals; I don’t think it’s such an isolated event ”.

The video, says Carlos Contreras, displays “grotesque behavior” of the operatives, anti-Semitic insults, taunts, slaps and animals without sedation. “What is most striking is that unnecessary suffering is caused, not only physical in the harmful treatment of animals, but also psychological. These are behaviors that would not be approved by any ethical committee, which are framed outside the experimentation law animal “, he emphasizes.

The recording has fallen like a jug of cold water in the Confederation of Scientific Societies of Spain (Cosce), an institution that launched in 2015 a transparency agreement signed by 144 entities (including representatives of biotechnology companies, veterinarians, public organizations of investigation…). La Cosce decided to take a turn and explain to the citizens why animals are still being used in experimentation.

The entities adhering to the pact undertook to provide information on their activities with an open-door policy. The blow has been hard, since, among those entities, was Vivotecnia, which Cosce has disowned as a lost sheep.

“We are the first to be angry and horrified. What we see here is not the day-to-day of the laboratories. It is easy to accuse that this is what happens in all laboratories. But it is not like that! ”, Emphasizes Lluís Montoliu, member of the Cosce commission in charge of studying the use of animals in scientific research.

“What hurt me the most, in addition to the procedures used, is the lack of empathy of the people that are there; the dehumanization that is perceived; those insults, those rough manipulations. We instill respect in our students and our technicians. It might seem like a pose, but it’s one of the things we spend the most time on; We tell them that they have the privilege of working with animals they must do their best ”, says Montoliu.

Concentration #rescatevivotecnia in front of the Ministry of the Environment in Madrid. Photo EFE

“I have been working with animals for 35 years and I have not been able to finish watching the video”, confesses Montoliu, a researcher at the National Center for Biotechnology (CSIC), perplexed by the succession of failures in the controls: those of those responsible for the institutions, that of their supervisors and that of the responsibility of individual persons.

Cosce asked the Vivotecnia laboratory for explanations. Its director stated that I was also horrified with what I saw and that he would initiate an investigation. However, the Vivotecnia website “has fallen” and no one answers the phone anymore.

Joan Antoni Fernádez Blanco, director of the animal facility at the Barcelona Biomedical Research Park, explains that some of the images from the Vivotecnia laboratory “They are unjustifiable.”

. “As a veterinarian, I also express my condemnation of some of these images, where the anesthetic treatment of the animal in terminal experiments or in some shots seems not to be the most appropriate,” he says cautiously but emphatically. “This is not the usual way that laboratories work,” he says, surprised by those he has witnessed, since these tests must (or should) pass through professional ethical committees.

Carmen Méndez (ADDA) maintains that the event reveals a “repetition of failures in the controls” in every chain, which, in itself, questions not only the work of the operators, but also supervisors, technicians and even the ethics committee of the company in charge of ensuring and supervising that the law is complied with and guaranteeing that the suffering of the animal is minimized.

The European directive and its adaptation to Spanish law requires numerous requirements to work with experimental animals. The staff has to be trained and trained. The researcher, to tackle any project, must justify the use of an animal and the absence of other alternative methods to avoid its use. All this task must be validated by an ethics committee and endorsed by another independent committee.

“This is not as easy as having an idea and starting to prick mice. From the moment you think of an experiment until they put it into practice, several months pass. You have to convince a lot of people, ”says Montoliu.

Concentration #rescatevivotecnia in front of the Ministry of the Environment in Madrid on the occasion of the investigation that has led to the closure of the Vivotecnia de Tres Cantos company. Photo EFE

The research task should be governed by the criteria of the so-called 3 Rs, focused on achieving the reduction of the use of experimental animals, the replacement (including alternative methods if available) and a refinement in the treatment to prevent animal suffering. Are these goals being met?

In the laboratories and research and teaching centers they were carried out in 2019 a total of 817,742 tests with living beings, according to the third report of the Cosce transparency agreement on the use of animals in experimentation. Although it is a high figure, the sum represents a reduction of 42% compared to 2009.

More than half of the tests (56%, more than 450,000) were done with mice; while the second most used group were fish (17%), followed by poultry (12%), rats (6%), rabbits, cephalopods and pigs (1.5%). Each center is obliged to account for the registrations and cancellations of animals that are registered.

Montoliu also explains that in the field of toxicological research evidence is being reduced, since sometimes cell cultures, organoids, organs with chip and other systems that are being validated can be used.

“What the law tells us is that, if there is a validated alternative method, it is mandatory to use it. It is not that “we can”, it is that we “must” use them, “he emphasizes. This researcher, according to exposes, previously used “lots of mice” to check how gene switches were activated or deactivated. But now he does not use them because he has the genome of different species at his disposal, so that he can compare the mouse genome with that of the dog on the computer. the cow or with humans to see the sequences that have been conserved.

It also uses flies or fish, instead of mammals, among other species that raise less ethical dilemmas. Progress has also been made in cosmetics, since three successive directives led to the prohibition of the use of animals for experimentation in 2013. None of the ingredients or cosmetics tested on animals can be marketed in the EU.

“The EU has a validation center for alternative methods, and in recent years the validation of alternative methods has been greatly accelerated so as not to have to use animals,” admits Méndez. For ADDA, however, these European policies collide with lobbies that are reluctant to abandon this activity, around which “powerful economic interests” revolve.

A woman who wounded a child with a knife was detained in St. Petersburg

Death Note 2 confirmed: it will be darker and faithful to the manga