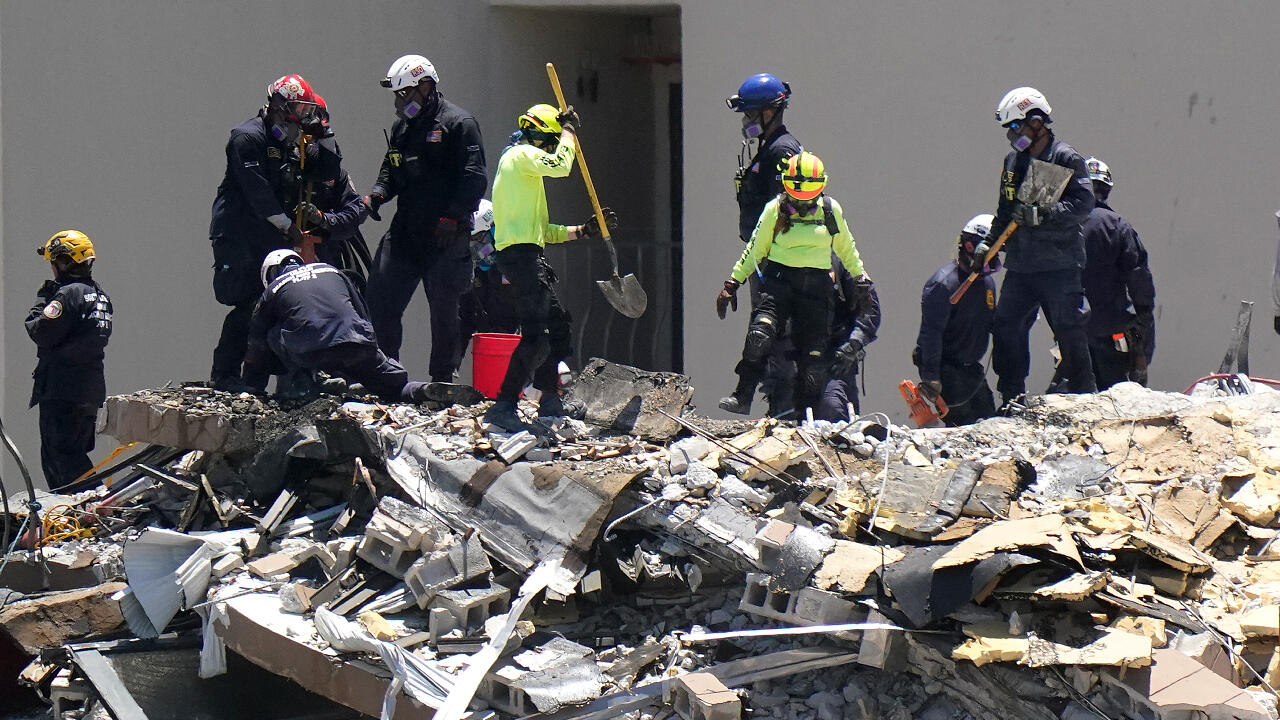 The figure rose this Sunday from five to nine deaths, after the authorities found more bodies without life under the rubble. In addition, 150 people remain missing, while the window of time to rescue survivors decreases.

Rescuers removed four more bodies from the rubble of the Champlain Towers South building, located on the waterfront approximately 22 kilometers from the city of Miami. This brought the death toll from five to nine, as confirmed by Miami-Dade Mayor Daniella Levine Cava at a press conference.

The official said that, of the total of those who died, one person died while being treated at the hospital and the other eight were found dead among the ruins of the building.

The Lozano’s Cuban couple were three weeks away from celebrating their 59th wedding anniversary, said their son Sergio, who had dinner with them hours before the building collapsed. Stacie Dawn Fang’s son, a 15-year-old, survived the building’s collapse and was rescued hours later. And Manuel LaFont was a children’s baseball coach.

Now, the fear is that the dead will continue to rise as time runs out for rescuers to find survivors. So far, just over three days have passed and 150 people have yet to be found. However, teams have not found anyone alive in recent days.

But the victims’ families are still waiting for positive news, while putting pressure on local authorities. A relative of one of the missing confronted Florida State Governor Ron DeSantis during a conference with relatives. “I know you are doing everything you can, but it is not enough”, reported the Local 10 channel of the ABC network.

For her part, Mayor Daniella Levine Cava mentioned at the press conference this Sunday that they have six to eight brigades working 24 hours a day. “We do not need personnel, we have the best personnel, the right people and the right numbers and we are working on finishing the rescue.”

His counterpart from the city of Surfside, Mayor Charles Burkett, agreed with Levine Cava that they have sufficient resources. But for him, what is missing is luck. “We just have to start getting a little bit more luck right now,” he said.

But with luck or no luck, rescuing the people still under the rubble is an “extremely difficult situation,” as Fire Chief Alan Cominsky put it. And it is that, according to him, while the rescue teams must find some indication of survivors, they operate throughout the day in a terrain that is not safe neither for the possible survivors nor for the rescuers.

One of the greatest difficulties, for example, is deciding where to put the rubble that they remove, since they must avoid increasing the weight of places where there may be people buried by the remains of the building.

In addition, there have been unexpected inconveniences such as the thunderstorms over the weekend and the fire last Saturday that hampered the search efforts. Levine Cava explained that after that, a trench was dug through the rubble to separate the areas of the burned ruins and those of the rest of the building.

At the press conference, DeSantis added that the debris is forensic evidence and that it will begin to be moved to a safe place. To do this, the rescue team is already using two cranes and two backhoes; that complement the work they were doing manually and with the help of rescue dogs, sonar, infrared scanners and drones.

To this is added the work of the federal agency dedicated to disasters like these. Since last Saturday, the president Joe Biden authorized the emergency declaration for the state of Florida, which allows the intervention of the personnel of the Federal Emergency Management Agency (FEMA, for its acronym in English) to help in the rescue, and the assistance to survivors and families of the victims.

“FEMA is here to assist with necessary resources as the emergency response continues and we move into the recovery phase,” stressed Deanne Criswell, the administrator of the federal agency. The phase Criswell refers to, recovery, begins once the response to finding survivors ceases. And it is that almost four days after the collapse, the chances of finding people alive among the rubble are low and that is when the operations with excavators to remove the rubble begin.

And while they are still waiting to find out what happened to their loved ones, some relatives have asked the authorities to let them visit the scene of the tragedy. Finally, this Sunday, relatives of the disappeared were taken by buses to a location near the rubble of the collapsed building.

From there and after 1:30 p.m. (local time), they began to pray around a pile of rubble. In some cases, they did so to commemorate those who have perished in the Champlain Towers South collapse, according reported the Miami Herald.

On the other hand, those affected by this case are in nearby hotels and will receive assistance from FEMA. “We have begun to register those affected and we will be working with them directly, while they apply to assistance and navigate the general assistance system,” confirmed Criswell at the press conference with DeSantis, Levine Cava and other authorities.