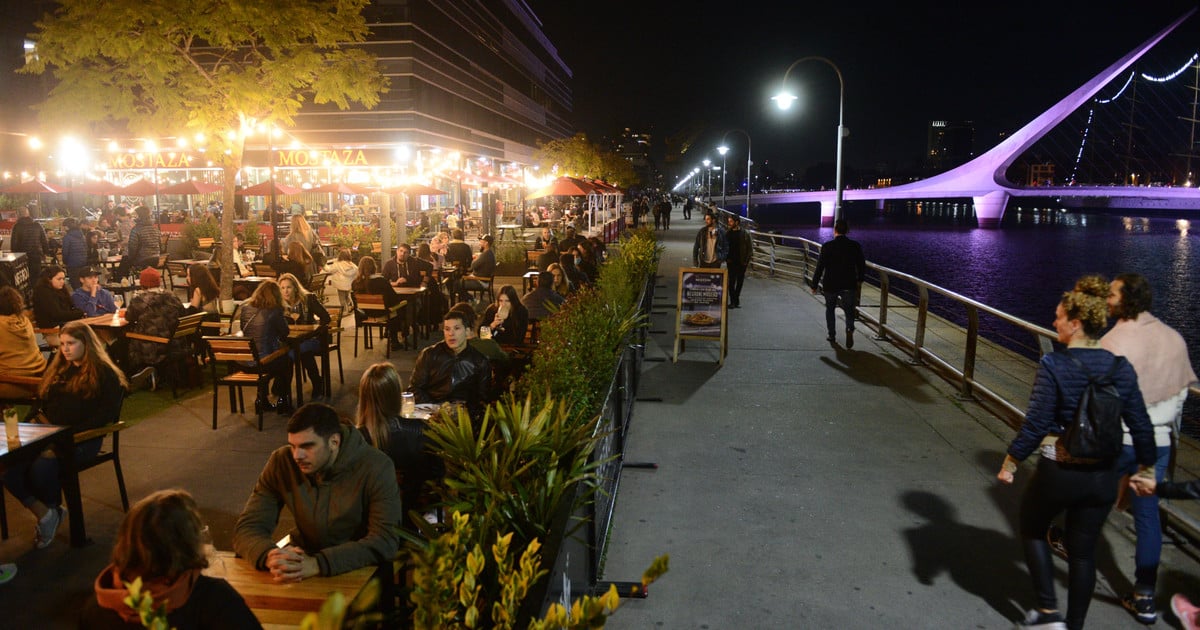 If he decrease in daily infections maintains the trend of recent weeks, the City of Buenos Aires will move forward with the release of some of the restrictions it maintains within the framework of government decisions to try to contain the coronavirus pandemic. And the main beneficiaries would be two items that are among the most affected due to the long periods of closure and limitations: gastronomic and gymnasiums.

In the case of bars and restaurants, it would enable the possibility that they can attend in the salons. Strictly speaking, it is something that already happens in different neighborhoods. They look local with tables occupied indoors. Especially in the coldest days and times.

Two weeks ago, these businesses were able to return to extend business hours to recover the night shift, which for the sector is the most important in terms of income. At that time, in the midst of negotiations and complaints to the City Government, it emerged that merchants found it more useful to add more open hours, even with tables outside, than to enable the lounges. Everything seems to indicate that from Saturday the two options will be added.

According to official data managed by the Buenos Aires Ministry of Health, in four weeks an average of 2,700 daily cases to 1,200 in the last days. As always, the authorities maintain that, although the drop is important, attention will be paid to the numbers for this Wednesday and Thursday to finish fine-tuning the decisions.

And the decisions will be made based on the expiration of the restriction period imposed by the presidential decree, which established restrictions on circulation according to the epidemiological situation of each district of the country.

Many gyms have classes outdoors. And they evaluate enabling them to work with 30% of the capacity of the classrooms.

According to sources from the Association of Hotels, Restaurants, Confectioneries and Cafes (AHRCC), out of 10,000 establishments in the City, 2,000 remained unopened until the beginning of June, when the period of tougher restrictions ended, during which they could work alone. with delivery or take away. In addition, they estimate that thousands will not be able to survive once the pandemic ends.

At the same time, traders include in the crisis the investments they had to do to face winter and get customers to sit at tables on sidewalks, patios or terraces despite the cold.

For example, the “mushroom” (gas heater) costs between 42,500 and 50,000 pesos. And the electric heating equipment comes out around 30,000. The amount needed depends on the dimensions of the outdoor space and the number of tables, so the investment is not the same for everyone.

Restaurants could also benefit from being expanded the circulation schedule, now restricted between 0 and 6.

Until now, only those who have outdoor spaces, such as terraces or patios. There are some who manage to give classes in squares or parks, although they cannot move the machines there.

This week the version began to circulate that they would allow them open the rooms with a capacity of 30%. Clarion He was able to know that there is progress in this regard and that the permit could take effect from Saturday, or from next week. Although for now there is no official confirmation.

Gyms are one of the sectors that remained closed for the longest time last year. And they again suffered from the strong restrictions as of April. Since then, they have only been able to go back to work in open space two weeks ago.

Now that the presidential decree expires on Friday and the daily infections are decreasing, they are excited about the possibility of recovering activities and partners.

“The situation is dramatic. The ones that stay open they are heavily in debt “, it is heard from industry sources. Hard data indicates that from March 2020 to April it is estimated that 20% of the stores throughout the country closed permanently. There were 8,000 prepandemics and about 1,600 closed.

The City is also evaluating enabling professionals to return to work on their studies in person. They are doing it, but in a virtual way. Is about legal and accounting studies, or architects and engineers.

The measure aimed to reduce circulation, especially in the public transport, which remains restricted to workers in items considered essential. And given the drop in infections, it could be reactivated, although there is also the possibility that face-to-face care is just a few days a week, like last year.

As to the classes, everything seems to indicate that there will be no substantial changes and that the City will wait for the Winter Break, which start in three weeks, to make decisions.

What could change is the bimodality format in which a part of the Secondary is. That is, presence would increase, as long as the downward trend in infections is sustained.