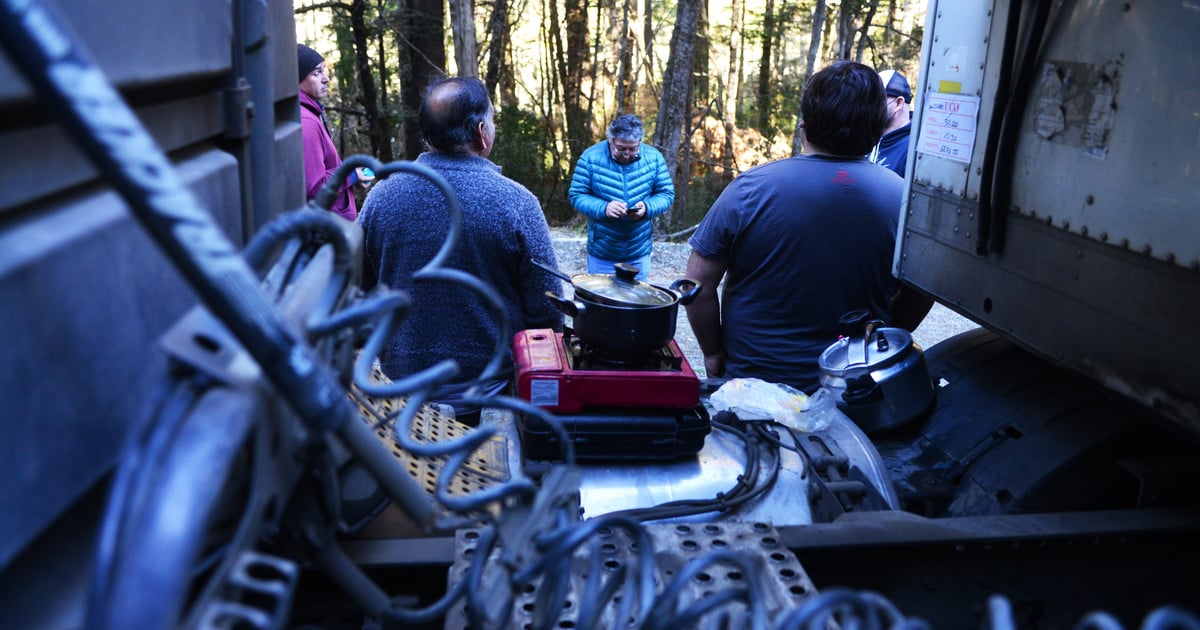 The attacks continue to escalate in the Cardenal Samore pass, some 42 kilometers from La Angostura, among Chilean truckers, neighbors and representatives of the movement of Self-convened Health Workers.

At different times this Monday and Tuesday, the trans-Andean drivers they imposed a counterblock on the bridge on the Correntoso river, 3 kilometers from the town, preventing residents from reaching their homes in the sector.

Just on the other side are the health agents of the hospitals of La Angostura, Junín and San Martín de los Andes and Centenario, and other locations.

Strong discussions were generated between trans-Andean people and the residents who were also blocked in the context of the wage conflict. Burnt tires, branches, canvases with slogans among other objects were observed on the road. Trailers were added to this scenario.

Meanwhile, neighbors, drivers and protesters staged numerous fights that almost did not end in the hands.

Health workers reported that this Tuesday afternoon an assembly will be held on the route in which it will be decided what measures to adopt.

The government is no longer interested in health personnel. Since noon yesterday we have been calling the mayor, Civil Protection, Transit and no one approached, “said the nurse Ezequiel Luna to La Angostura Digital.

Neither the National Gendarmerie nor the Neuquén Police were present at the scene. The workers denounced that the area was “liberated” by the forces of order.

The health agents denounced that it was the gendarmes who encouraged the trucks to go from the Cardenal Samoré pass to the Correntoso river bridge. There they found that the picket had not been lifted and fights broke out.

For more than a month, the Self-convened Health Workers have been holding a picket in La Angostura. In practice, the only ones who cannot travel normally are Chilean truckers. The other Argentine cars are allowed to pass.

Because the pickets let 20 side trucks advance per day, lines of 100 or more freight vehicles are generated. The drivers wait between 4 and 5 days to continue their trip. In the Cordillera you can already feel the severity of the cold, claim the drivers who do not have access to food or toilets.

“We have been saying (this was happening), but nobody paid attention. Nobody knows the problem that we have been suffering from trip to trip”Chilean conductor José Millapel complained to Mauricio Vidal’s BDR program in Punta Arenas. The drivers demand the intervention of the authorities of their country and especially of Magallanes, the region where many of them are heading, to unblock a conflict that exceeds them.

Although the workers accepted the 53% proposed by the government of Omar Gutiérrez, they ask that the increase be payable between May and June and not until December as proposed by the authority. In July they hope to sit down to debate a new joint.

They also demand that they return the discounts made for the 22 days of blockades that took place in the rest of the province and affected the activity in Vaca Muerta.

Until this is accomplished, they will not leave the last picket line that they have standing in Cordillera.

The truckers signed an agreement last Friday with ambassadors Rafael Bielsa and Nicolás Monckeberg Díaz in Tierra del Fuego. On the island, they had organized another counter picket that stranded about 1,000 Argentine truckers heading to Rio Grande and Ushuaia.

The diplomats assured that they will update the binational agreement for the free transit of trucks signed in 1974 in 45 days. The purpose is to achieve a circulation protocol that guarantees the route of drivers from both countries during social conflicts.

Elections in Madrid: a regional election that has a full impact on national politics

Covid-19, the week in America – The world already exceeds 3 million deaths from Covid-19