The champion of the summits .. Saeed Al-Maamari climbs the mountains carrying a “message of peace” 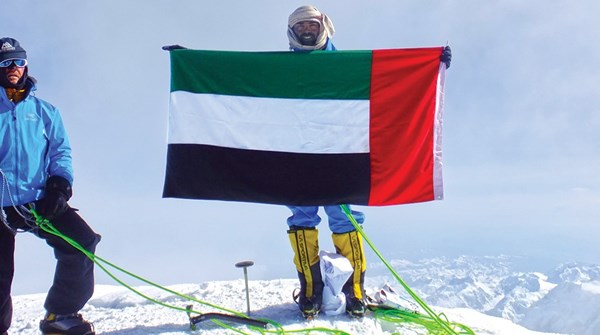 “He who is afraid of climbing the mountains…lives forever among the pits.” A verse of poetry by Abu Al-Qasim Al-Shabbi was an incentive for the Emirati adventurer Saeed Al-Maamari to climb the highest mountain peaks in the world. After ascending 66 summits so far, he is racing against time to reach 246 “peace summits”, bearing in mind that he will be the first Emirati to reach the highest mountains around the world, carrying a message of peace from the homeland of tolerance.
Al-Maamari carries on his back all the climbing items he needs on his travels, from ropes, a ski stick, and a little food, stressing that he loves climbing mountains, challenging the impossible, and climbing the highest peaks of the world’s continents and the North and South poles, and he deserved the title of “the first Emirati to climb the highest peaks of the world and the poles.” ».

Ataa Al-Maamari did not stop at this point, but implemented many community initiatives in cooperation with a number of authorities and institutions, and founded the Emirates Association for Mountain Hobbies, and serves as director of the Fujairah Adventure Center.
He says: the “Peace Summit” initiative: “My love for the world of climbing the summits pushed me to the challenge and achieve what I seek from the initiative, and during my trips to the summits I bring a message of peace from the Emirates to the world.
He added: “It includes the message of peace from this good land and its noble people who live in a state of human rapprochement and brotherhood among all religions, races and cultures, following the approach of the late Sheikh Zayed bin Sultan Al Nahyan, may God rest his soul, and who adheres to the bonds of unity, cooperation and strength that transcend human beings and advance nations. ».
He pointed out that the UAE’s message, with a sublime goal, is universal in orientation, humanitarian in content, inspired by the spirit of the union, and seeks to promote the values ​​of peace, tolerance, dialogue, coexistence and rejection of discrimination and extremism among all peoples of the world.

extreme adventures
The initiative aims, as Al-Maamari confirms, during his arduous adventures, which require a lot of effort, fatigue and nervous days that the mountain peaks carry from snowstorms and shortness of breath at the highest peaks to spread the message of peace from the Emirates to all countries of the world, and add the name of the Emirates to the field of climbing and access To the tops of the world, issuing a book of peace that conveys messages of peace from leaders of countries, and establishing a Peace Summit Fund to support initiatives that serve peace.

Broad Peak mountain
Al-Maamari is currently at the top of Broad Peak Mountain, one of the toughest peaks in the world, located in Pakistan, and among the Qarqorum mountain range, about 8,060 meters above sea level.