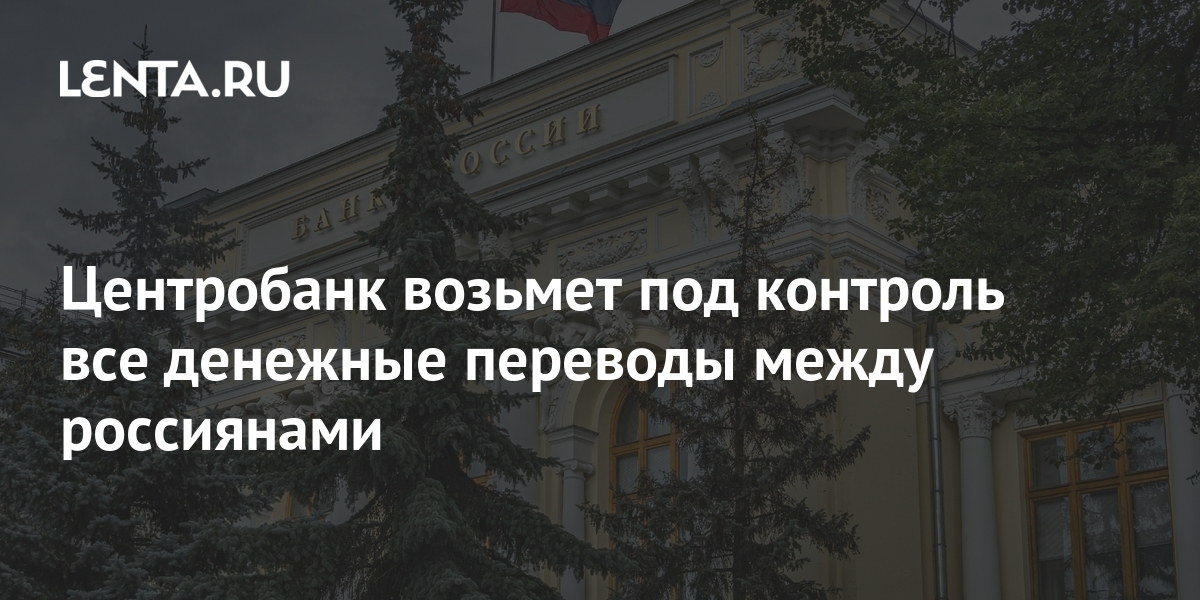 The Central Bank (CB) of Russia will control all transfers of funds between individuals, requesting information on them from banks, including personal data. This follows from the new form for submitting reports sent to credit institutions by the regulator, writes RBC with reference to sources.

Deputy Chairman of the Board of Sovcombank Oleg Mashtalyar clarified that the Central Bank will begin monitoring money transfers from January next year. The representative of the QIWI payment company, in turn, noted that the regulator will also periodically request information on transfers.

The representative of the Central Bank said that the main purpose of the introduction of new reporting forms is to optimize the presentation of data by banks and obtain up-to-date information on payment services. They will be used to analyze the market in the country as a whole and in the regions, as well as to form statistical indicators.

It is specified that from 2022, banks will have to include in reports information on transfers of Russian citizens from card to card, from card to account, from e-wallets and from telecom operator accounts, in the Fast Payments System, through payment terminals and money transfer systems , as well as for cross-border transfers.

Representatives of the Central Bank noted that the transfer of funds to deposit accounts, accounts for repayment of loans, brokerage or investment accounts, commissions of credit institutions for servicing, as well as transfers in favor of legal entities and individual entrepreneurs will not be controlled.

According to sources, the new measure will help in the fight against illegal online casinos, crypto exchangers and businesses that accept payments for personal cards. It is expected that the Central Bank will be able to use the reports received from banks to control gray entrepreneurship when Russians accept payments for their goods or services on the card.

The Chairman of the Central Bank Elvira Nabiullina said that the Bank of Russia is also discussing the possibility of making free transfers between its accounts in different banks in the range of 1.4 million rubles.

Such fees can often be a barrier for people to freely dispose of their money and choose those banks where deposit rates are more attractive for them.

Elvira NabiullinaChairman of the Central Bank

In her opinion, thanks to the proposal to remove commissions, competition among banks will increase.

The Bank of Russia intends to increase the amount of transfers abroad, exempted from currency control, from 200 to 600 thousand rubles. The changes are aimed at relieving the burden on residents, including participants in foreign trade activities.

It is planned that they will enter into force in the near future, but the exact date has not been specified. Timur Eshpulatov, a member of the Russian Bar Association, believes that the amendments will not affect the level of fraud in this area.

Pen & Paper’s lawyer Alexandra Kharina, in turn, emphasized that at present, when making settlements on foreign exchange transactions in the amount of more than 200 thousand in rubles, it is necessary to submit the transaction documents to the bank. These requirements apply to individuals only if they carry out operations that are associated with the provision of loans to non-residents and the return of such loans from non-residents.

The head of the Federal Tax Service (FTS), Daniil Egorov, said that the department plans to abandon the document, popular in Russia, – the 3-NDFL income declaration, which is standard for individuals.

Egorov noted that Russians submit about 14 million such documents a year. The ability to enter a refusal to fill out declarations depends on the access of specialists to the data.

Our general strategy is aimed at eventually bringing the system to such a state that there are no declarations at all. In the future, we plan to abandon the 3-NDFL declaration for most cases.

Also, Russian Prime Minister Mikhail Mishustin said that in 2022 Russia will begin testing an automated taxation system, or ASN. According to him, the new tax regime is a variant of the simplified taxation system (STS). According to the authors of the initiative, its introduction will contribute to the development of micro-enterprises. It is expected that it will become easier for them to interact with the state.

It is noted that for the participants in the experiment, the filing of tax returns will be canceled, the tax will be calculated automatically, based on the data of online cash registers and transactions on accounts. At the same time, the costs of tax reporting will be reduced, and resources are planned to be directed to business development.