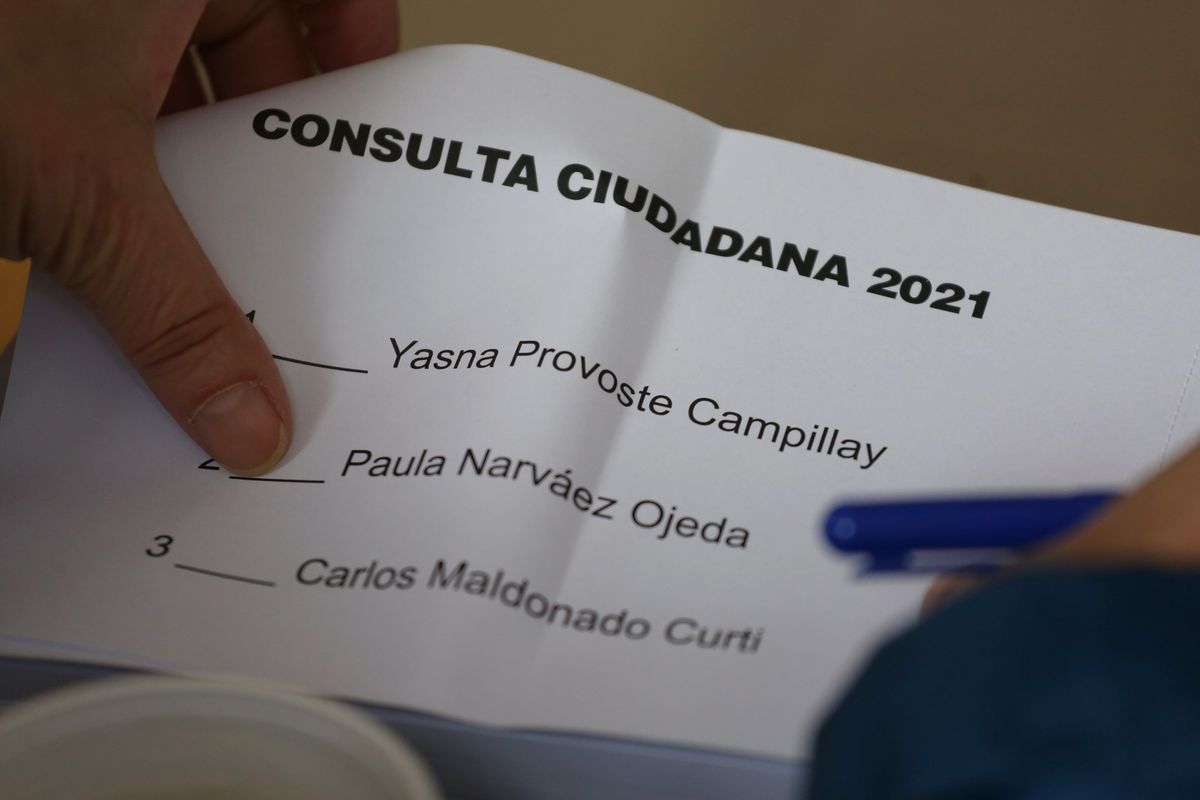 The Chilean center-left, a sector that governed after the dictatorship between 1990 and 2010 and that today faces a deep crisis, has elected this Saturday the Christian Democratic senator Yasna Provoste as its candidate for the presidential election in November, where the replacement of Sebastián Piñera will be defined. . The 51-year-old parliamentarian, president of the Senate, prevailed with 62.2% over the other two champions of the Constituent Unit alliance: the socialist Paula Narváez, who obtained 26.4%, and the radical Carlos Maldonado, who reached 11.4% (with 53% scrutinized). In the elections scheduled for November 21, Provoste will face the lawyer Sebastián Sichel, former minister of the current Government, representative of the ruling party, and Gabriel Boric, deputy of the Broad Front and standard-bearer of the left, both elected in the legal primaries of their respective sectors, on July 18.

The triumph of Provoste, Michelle Bachelet’s former minister, as well as Maldonado and Narváez, was a highly probable scenario. Although the United Nations High Commissioner for Human Rights herself pushed the candidacy of the socialist. Although Provoste entered the race late, defined its application on July 23, the polls immediately installed it with an advantage over its competitors. A Christian Democrat since adolescence, she held various positions in the governments of the Concertación and came to lead the Ministry of Education in 2006, in the first term of Michelle Bachelet. She was, however, removed from her post by Congress, accused of negligence in the execution of the laws. In 2014 he entered the Chamber of Deputies and in 2018 the Senate. Diaguita, one of the original peoples of northern Chile, usually claims his ancestry.

A little more than 150,000 people participated in the citizen consultation of the Constituent Unit, according to official estimates. Unlike the July primaries of the right and the left – which summoned a total of 3,139,765 citizens – the center-left did not manage to legally register their consultation, for which there was a deadline until May 19. The electoral exercise this Saturday, therefore, was organized by the sector’s own parties and not by the Electoral Service, it did not have state resources or spaces such as the television strip. If a month ago there were 16,000 tables in 345 communes in Chile, this time the center-left parties had 1,300 tables in 320 municipalities.

The inability to reach an agreement to register their legal primaries shows the crisis facing a sector that includes the Christian Democracy, the Socialist Party, the PPD, the Radical Party – the four that formed the defunct Concertación – along with Ciudadanos, Nuevo Trato and the Liberal Party. The center-left does not have a solid political project to offer the country, which is partly explained by the inability to renew its postulates and faces. Without the strength to raise their own project and differentiate themselves from the left, on the night of May 19 the socialists were about to seal an alliance with the communists and the Frente Amplio and break their historic alliance with the center that made the return to democracy possible. and the four governments of the transition (Patricio Aylwin, Eduardo Frei, Ricardo Lagos and the first term of Michelle Bachelet). If the agreement did not materialize, it was because the left censured the PPD, the historical comrades of the Socialist Party.

The Constituent Unit, therefore, seems less like a center-left ideological conglomerate than an electoral agreement for convenience. As the parliamentary lists are negotiated in parallel, which will be held on the same November 21, the parties know that their chances with a view to Congress are nil if they do not compete together.

Part of this disaffection has been revealed in recent days, when the leader of one of the Constituent Unit parties —Marcos Enríquez Ominami, of the PRO— has approached the possibility of arriving with a presidential candidacy directly to the first round of November. In 2009, his candidacy for La Moneda was central to the right wing’s first triumph against the Concertación, when Sebastián Piñera prevailed over Frei. Then, in 2013, Enríquez reached a 10% support, which again left him out of the ballot between Bachelet and the candidate of the right, Evelyn Matthei. The same happened in 2017, when he was sixth among eight candidates for the Government.

In the crisis of the center-left, the discourse against the transition that has been installed in the Chilean political scene and that raises above all the left of the Broad Front and the Communist Party does not contribute. This gaze gained strength after the social upheavals of October 2019, when an explanation for the outbreak became popular: it did not respond to the 30-peso rise in the subway fare, but to 30 years of center-left and right-wing governments, the two coalitions that led the transition. In the elections for the constitutional convention in May, probably the most important in Chile’s recent history, this sector reached 25 seats out of 155. It was so much outnumbered by the right that, united, it reached 37 seats (insufficient in any case). case to get a third of the representation and have the ability to veto the rules) as for the left, which obtained 28 seats. In the election of governors, however, he was left with 10 of the 16 positions in dispute.

The presidential race will be complex for the center-left candidate, who must be measured against Sichel’s right and Boric’s left: both surpass her in the polls and seem strengthened, from the start, by the electorate they mobilized respectively on July 18. It will be especially complex for Provoste to differentiate itself from Deputy Boric, because the senator belongs to the progressive sector of the Christian Democrats and her distances with the left are not clear. He will be challenged to tie up the socialist electorate, seduced by the Broad Front candidate.

In the presidential elections to be held in three months, at least two other candidates will compete: José Antonio Kast (Republican Party) and Franco Parisi (People’s Party). The deadline for registrations expires this Monday 23.