The calvary of the mythical singer of the first Iron Maiden 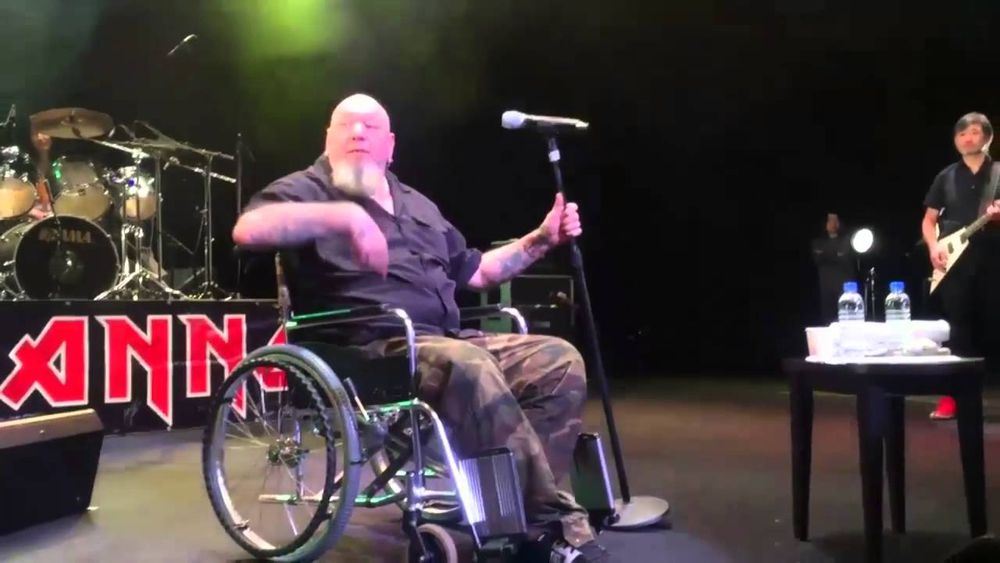 This is a story that needs the cinematic resource of the screen split in two. In one, Steve Harris, Bruce Dickinson and the other members of the current Iron Maiden appear in their rich rock mansions, organizing the next stadium tour; the other screen, separated by a vertical line, shows Paul Di’Anno, the singer who recorded the first two Iron Maiden albums, at home, strapped to a wheelchair, waiting for a group of fans to raise money to to be able to finance an operation that allows him to walk again. A screen with two poles of history. The winner and the loser. Life itself.

Paul Di’Anno has been married five times and has six children spread over different places: Brazil, USA, Venezuela… Despite his extensive family, he lives alone on the outskirts of Salisbury, southern England, in a modest apartment. He handles himself with his wheelchair, but hardly ever leaves the house. These days he receives congratulations from friends and followers because Iron Maiden is a candidate to enter this year in the Rock and Roll Hall of Fame, the American institution that certifies the importance of rock bands with more than 25 years. Now a popular vote period opens until April to see if finally one of the biggest bands in the world heavy metal enters the Hall of Fame. As usual, the nomination extends to members who helped build the groups’ fame, and not just current ones. That’s where Paul Di’Anno comes into play. “It’s fantastic. An honor that I have been nominated. Although I will not be able to travel due to health issues, ”Di’Anno told EL PAÍS by email.

“I have been bedridden for six years and have hardly worked. I have to pay medical bills. Yes, things are getting a bit complicated. “

For some time now, the singer (London, 62 years old) has had health problems that prevent him from developing his musical career. A few years ago he underwent surgery to treat an abscess in the lungs “the size of a rugby ball,” the musician said at the time. Added to this were his knee problems, which he claims to have shattered. During one of the operations to implant a kneecap, he contracted sepsis, an infection caused by a bacteria that is resistant to antibiotics. “I have been in a wheelchair for six years and have hardly worked in this time. I have to pay medical bills. Yes, things are getting a bit complicated, ”he says.

Before his health failed, Di’Anno’s life suffered other shocks. In 2011, he was sentenced to nine months in jail for fraud. The singer requested aid from the State for years worth 45,000 pounds (about 52,000 euros) claiming that he could not act for health reasons. Investigators from the British Department for Work and Pensions discovered YouTube videos of his concerts and decided to take him to court. During the period in which it received government aid (from 2002 to 2008), it carried out up to 68 actions. In a concert in Brazil he got to summon 10,000 people. The singer pleaded guilty and was able to reduce his prison time to two months thanks to his good behavior. The musician’s defense attorney, Steve Ritter, alleged that Di’Anno “was obsessed with acting to support his family and that on the economic issue he had acted naively.” And he clinched: “He has fallen into a pit of chaos and has lost practically everything.”

Di’Anno does not have many resources currently. That’s why Cart & Horses, the old London pub where the group started, has launched an online campaign. “We want to raise 20,000 pounds [unos 23.000 euros] to help Paul Di’Anno finance a knee operation that has been overdue. The beast [así le apodan] he needs our help now more than ever ”, says the text. Contributions currently amount to 7,024 pounds [unos 8.200 euros]. “I am tremendously grateful to the folks at Cart & Horses,” says the singer. Di’Anno belonged to Iron Maiden from 1977 to 1981 and gave voice to the first two albums, Iron maiden (1980) and Killers (1981). For a good faction of fans it is the best era of the band.

The vocalist grew up in East London in a “very poor” family, he claims. He had to drop out of college as a teenager to work and bring money home. The first time he saw Iron Maiden live, precisely at the Cart & Horses pub, they seemed horrible to him. The singer, Dennis Wilcock, took the stage with a saber and performed a number that ended with artificial blood running down his body. When Wilcock left and Steve Harris (bassist, songwriter, frontman, and only member who has been there since the beginning) proposed Di’Anno to fill the position, Di’Anno thought about it. He was punk, he liked the Sex Pistols, the Ramones, the Clash, UK Subs; did not want to join a group of heavy metal. But in the end he accepted. His rough and tough style filled the band with charisma. Di’Anno showed personality and the fierceness that the group needed. Harris loved Wishbone Ash; him the Ramones. From this shocking mix, Iron Maiden was born.

Offstage Di’Anno acted like a hooligan. He drank, took drugs, bragged, and went on Saturdays to support West Ham United. On the day of the first key concert of his career, at London’s Hammersmith Odeon, where Iron Maiden was to audition for the influential manager Rod Smallwood, Di’Anno was arrested for pulling a knife in the street. The group had to get by without him for half an hour, lengthening the songs instrumentally. With a few minutes to go, the vocalist arrived directly from the police station. Despite this Smallwood signed them and was a key man in the rise of Iron Maiden. He is still with them.

After the release of the second album (Killers, 1981), Di’Anno set out on a self-destructive path. He did not appear at several concerts of the tour and Harris, a guy with an opposite, almost military character, told him that he could not continue like this “because he was sinking the group. The outcome was clear. Did he leave or did they kick him out? “It’s a complicated matter,” says the singer today, without wanting to add anything else. On the DVD released in 2004 by the band, The History of Iron Maiden, offers more explanations: “I could have redirected my life and continued, but I did not want to. I am very stubborn. If you don’t give 100% it doesn’t make sense. I was given an opportunity that some would give their lives for it… But I don’t regret it ”. Di’Anno was not interested in fame and the drift of the group did not convince him.

Iron Maiden signed Bruce Dickinson and became the band heavy metal larger. And Di’Anno? He was stumbling, with some brief peaks, but always seeing his ex-band from far away. Among his bad decisions, another must be noted: he sold the rights to his songs with Iron Maiden for 50,000 pounds (about 58,000 euros). Some of those songs have been performed by the group for years, but he no longer charges. In 2016, no longer able to walk, he gave some concerts in a wheelchair. They were the last. The question is: why don’t any of the current members of Iron Maiden put up the money for the singer’s surgery, an outlay that would be small change to them? I spoke to Steve [Harris, el líder] it’s been a while and we message each other from time to time, ”says Di’Anno. From their environment they point out: “The relationships between them are difficult.”

What are you going to do in the next few months? “My plans are to have surgery and, I hope, go on tour and record an album.”

And do you regret anything in particular? “I regret many things. Who does not”.