The Caballito tram is back, a journey in the mid-twentieth century from a pandemic present 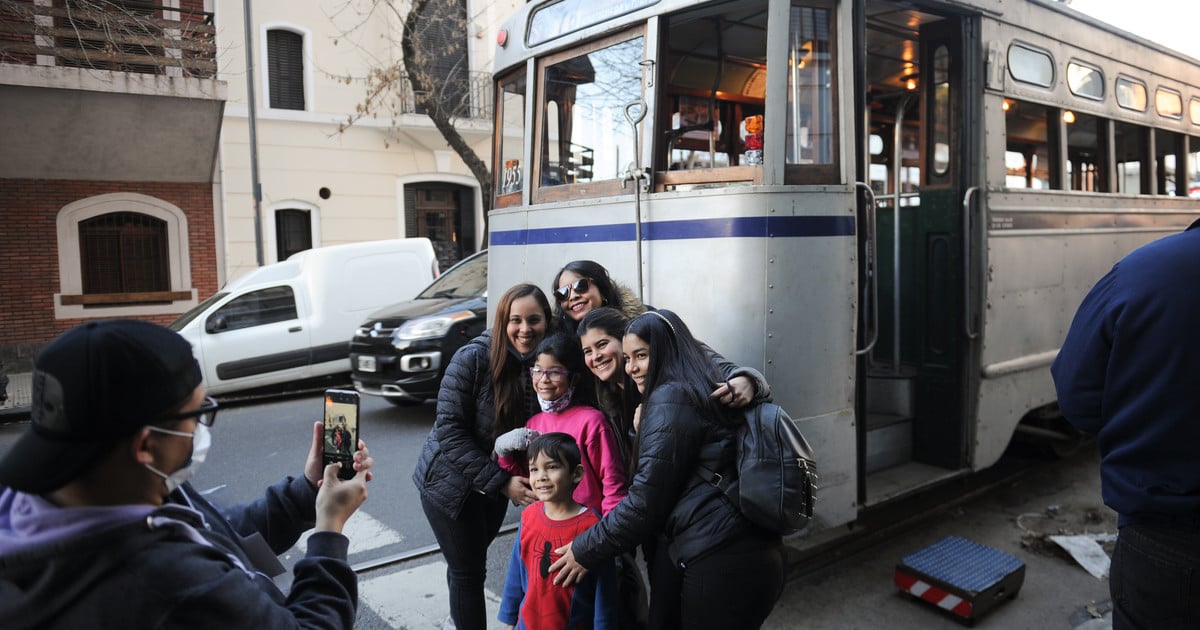 “Look, look, there it comes out. Say hello, say hello ”. Mothers with young children are the majority in this row of almost a block starting in José Bonifacio and Emilio Miter, Caballito. It is the Polvorín Workshop, from where the cars of line A departed every morning. On weekends, in addition, those of a strange transport for the youngest and missed by the older ones leave there: the tramway.

The one that emerges this Saturday at 3 o’clock circulated for the last time as transport in 1963. Today the objective is entertainment: for neighbors, for lovers of history or trams, for families seeking pandemic plans.

In that last group are Nieves, Guillermo and their 6-year-old son. They came from Ciudad Evita because the father is a fan of trams but he had only gotten on one in his childhood, in Corrientes. The mother is delighted to accompany her: she wants little Simon to have fun but “with protocols, something that is not achieved in a square, where they are all piled up. Here, on the other hand, everything is much more careful ”.

The tram leaves the Polvorín workshop and young and old are expectant. Photo Juano Tesone

On the other side are the volunteers of the Friends of the Federico Lacroze Tram Association. Ernesto Falzone gives the introductory talk to the twenty people who are about to go up. It also offers die-cut paper puzzles, mugs, keychains and trams for anyone who wants to take one “at will”.

It is that the Association does not have subsidies. The only thing covered is the use of the tracks used by subway A cars between the workshop and the Primera Junta station, and electricity, provided by Sbase and Metrovías. Which is not much either: spend the same as an iron for clothes.

The driver Pablo Piserchia and Guadalupe Vázquez wait diagonally, the only woman who handles them but this Saturday is on board guard. “I’m from Mar del Plata, but I came here in love with trams. I am Pablo’s partner but there was no accommodation, I had to do the 200 kilometers of practice like everyone else, ”he says and laughs.

Guadalupe Vázquez is one of the drivers, but this time she has to act as the guard. Photo Juano Tesone

It says it under the car, minutes before starting the first tour. His voice is barely heard, covered by compressor noise that pumps the air that will allow the pneumatic system to brake, one of the three that the car has to stop its march.

Guadalupe is happy to have returned for the second time: the return in pandemic was in February, but the confinement of May forced to interrupt until last weekend.

Pablo Piserchia drives the tram through the streets of Caballito. Photo Juano Tesone

The Association has 15 cars, some of more than a century, others brought from the subway, the Premetro, Europe. Only one circulated through Buenos Aires streets, an FM 3361, and it is the one that comes out this Saturday.

It was made in 1955 and started walking two years later. After the end of the tram, its bodywork was a classroom at the Colegio de las Hermanas de la Resurrección, Lanús Oeste. It was only in November 2000 that he returned to the streets, after being restored and remotorized by the Association’s Mechanical and Maintenance Division, which returned it to the tracks on its twentieth anniversary.

The tram that left this Saturday was manufactured in 1955. Photo Juano Tesone

Since then, he has made the walk that connects that corner with Rivadavia and Hortiguera, and back to the origin. The show surpasses what happens inside the car, it overwhelms it. It’s seen in how people look at it from the outside and say hello, in how old people smile and boys open their mouths, a mixture of confusion and wonder.

If it weren’t for the chinstraps, alcohol gel, and low windows, it would be the middle of the 20th century inside the car. The first stop is on Pedro Goyena avenue, but the first contrast with 2021 occurs a few blocks later, in Rivadavia of buses and rushed cars.

The chinstraps and alcohol gel break the illusion of being in the middle of the 20th century that one lives inside the tram. Photo Juano Tesone

The wooden-seated car remains impassive, a house cat in the jungle. It goes at its own pace about 20 kilometers per hour. The slowness can also be seen in the details: the calm with which Guadalupe cuts the ticket, the difference with the “Up!” and “Close?” to the screams of today’s transportation.

Pablo Tomassi and Andrea Natale listen carefully: they came from Agronomy to entertain but also to learn. “I am a teacher and a librarian, so I was interested in meeting him to bring the content to my classes,” she explains.

Pablo and Andrea take selfies. They say that they joined the walk to entertain themselves, but also to learn. Photo Juano Tesone

Two wooden seats further back, Nicolás and Leandro arrived from Lanús to “Go back to a past that we never lived”, says the first, that at 19 he wants to study Railway Engineering. “We are fans of trains and their history. We believe that the tram should return, as seen in several European countries. It would attract tourism ”, adds the second.

The ride of two kilometers and 15 minutes it ends where it started. Everyone gets off except Six-year-old Malena. The mother cannot get her out of the car. Guadalupe comes to the aid. “Now other children are going to come for a walk,” he explains patiently. It only works when you are promised that next weekend you will be able to travel again, in space and time.

The tram of the Friends of the Tramway and Federico Lacroze Popular Library Association leaves Saturdays from 15 to 18 and Sundays from 10 to 13 and from 15 to 18, every 20 minutes approximately.

Corner part of Emilio Miter and José Bonifacio, in Caballito. Entrance is free and open.