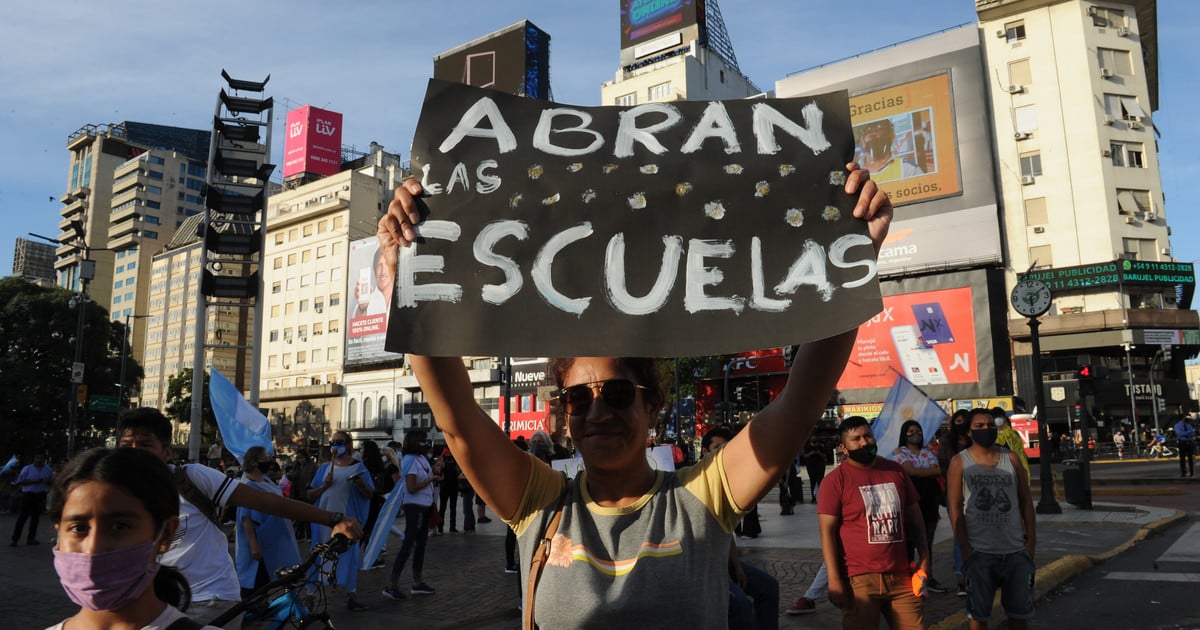 After the opinion of the prosecutor before the Court of Appeals, Karina Cicero, Chamber IV ruled in the same sense: guarantee face-to-face classes in the City of Buenos Aires from this Monday, April 19. Thus, two appeals were filed by two non-governmental organizations that bring together parents, who asked to suspend Article 2 of the DNU signed by President Alberto Fernández. It is about the presentation made by a group of teachers at the NGO Abramos las Escuelas, and another from the Center for Public Policy Studies.

The central proposal of the amparos that the Public Prosecutor’s Office analyzed on Sunday morning and later, Chamber IV of the Appeals Chamber, focused on the specific request for the suspension of Article 2 of DNU 241/2021 that the President signed on Thursday night. There, the brake was ordered for a period of fifteen days of the classes in person at the AMBA. Specifically in the Federal Capital this reaches 2,359 educational units that bring together a population of 600,000 students.

When the claim entered the contentious administrative jurisdiction, it was Judge Marcelo Segón who considered that it should not intervene and asked that everything be sent to her partner Romina Tesone who on Friday night, declared herself incompetent to resolve against the amparo presented by the Defenders Officers representing parents. There it was requested that the DNU be declared invalid and open schools be guaranteed.

The magistrate maintained that since the City went to the Supreme Court of Justice to resolve the unconstitutionality of the Decree, It did not have to be issued on the amparo presented by the parents, since the decision of the Highest Court had to be awaited. Judge Segón wanted to follow that same criterion, but the two amparos returned to his court and reached the Appeals Chamber.

After this administrative tour, the chambermaids Marcelo López Alfonsín, Nieves Macchiavelli and Laura Perugini, requested the opinion of the Public Prosecutor’s Office led by Juan Mahiques. Macchiavelli is the sister of Eduardo, Buenos Aires Secretary of the Environment and right-hand man of Rodríguez Larreta in the national political army.

Before the ruling that now enabled the return to classes, the prosecutor Cicero had argued: “I understand that it would be appropriate to give place to the precautionary measure requested in the initial letter, and to provide that the continuity of face-to-face education in the educational establishments of the CABA starting next April 19 “.

The members of Chamber IV were the ones who finally had the final word and when analyzing the amparos endorsed by the representative of the Public Prosecutor’s Office, they failed under the same criteria.

The prosecutor had indicated that the decision on the precautionary measures imposed in the Buenos Aires justice system could produce “serious consequences for the affected group”, an affectation that “is academic, social, relational and maturing with a special focus on the most disadvantaged sectors where the school fulfills a function of social containment 3) “.

In this sense, He recalled that the students “come from a full year in which their attendance to the classrooms has been practically nil. Virtual education mitigates but does not solve the lack of school attendance “.

In another order, the prosecutor Cicero remarked that the national State made the decision to suspend face-to-face classes at the AMBA for fifteen days, with “scant information presented on the incidence that school attendance would entail and the consequent use of means of transportation and their companions in the growth of people infected by COVID. “

Nets go down without Harden ... or Durant, which lasts 4 minutes