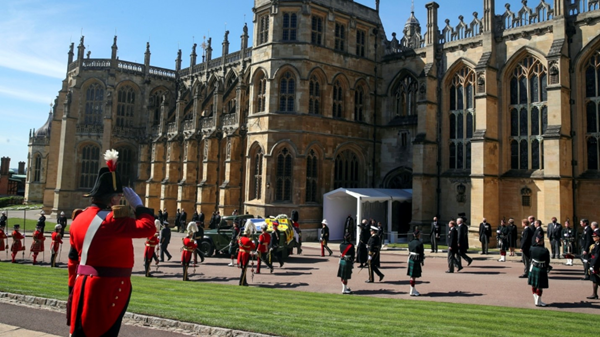 The coffin of British Prince Philip was buried in the royal crypt in St George’s Chapel at Windsor Palace, at the end of a funeral ceremony that included only 30 people on Saturday.

Queen Elizabeth II, his wife for 73 years, was forced to sit alone during mass due to the strict Corona virus regulations in place in England.

The prince, who was also known as the Duke of Edinburgh, was buried about a week after his death at the age of 99.
Television cameras did not capture the queen’s facial expression during the mass.

However, photographers who were allowed to take pictures of the queen before mass began, dressed completely black, sitting alone on a bench and staring at her husband’s coffin.
Mourning rose to the faces of other members of the royal family during the mass.