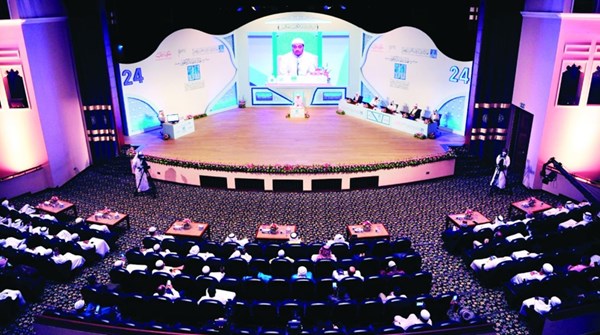 The tests for the fourth day of the Sheikh Hamdan bin Rashid “may God have mercy on him” course for the Dubai International Prize for the Holy Quran were marked by the strength of competition between the four contestants participating in the tests yesterday evening, before the international jury at the Culture and Science Symposium in Dubai.
The competitions witnessed the brilliance of the Bangladeshi contestant representative, Jamil Jahiruddin, who was distinguished by an angelic voice, and gave a very distinguished performance that qualified him to compete in the first places for the current session, to be an extension of his country’s distinguished record in its participation in the previous sessions, in which it obtained the first places or was among the first many times. .
The performance of the Bengali contestant was characterized by the exits of the distinct voices and the beauty of the voice, and this was only disturbed by his preoccupation with the tradition of the well-known reciter Sheikh Muhammad Ayyub, which made him make two mistakes, and returned to the distinguished performance after returning to his normal way of performance.
The representative of Guina Konaki, Mohamed Mara, is the second to perform in the performance of the night, but the remarkable thing is that he read the five questions addressed to him, eyes closed, considering that this led to focus and not confusion, which helped him to overcome the difficult questions that were directed to him.
But on the other hand, he made a mistake in answering the easy question, which came from Surat Al-Kahf, and which also caused most of the mistakes he made, the representative of Uganda, the contestant Slate Hesham, who is considered the third distinguished, with his enjoyable, comfortable and rare reading in her manner and a beautiful voice A torment in which the verses live, and the volume of sound varies according to the content and meaning of the verses, as if he were to explain them through reading.
This contestant made a mistake, several times in the third question, which came to him from Surat Al-Kahf, which is one of the easy surahs that are preserved by all conservatives, which took him out of the race for the first places.
Competitors confirmed that the Dubai International Prize for the Holy Quran has made great efforts to continue holding this international competition, despite all the challenges that the world is going through today, due to the Coronavirus pandemic.
On the fourth day, Abdul Rahman Ibrahim Nazmi Wadi from Palestine, Slate Hesham from Uganda, Muhammad Mara from Guinea Conakry, and Jamil Ahmed Jahreddin from Bangladesh were competing on the fourth day.

Quranic stories
The contestant, Abd al-Rahman Wadi from Palestine, who is fifteen years old, stated that he was a ninth grade student, who began memorizing the Noble Qur’an at the age of four at the hands of his mother, then moved to memorization sessions at a center for memorizing the Holy Qur’an in the Emirate of Ajman and sealed it at the age of nine. He pointed out that he was encouraged by his parents, who preserve the Holy Qur’an, and he has six brothers who are about to conclude the preservation of the Book of God, explaining that he had previously participated in local competitions in parts of the Holy Qur’an, but the Dubai competition is his first international competition for the entire Qur’an.
He said, “I used to memorize one page a day, but on the last day I memorized two parts in one day, and they were both parts of the cow, because of my enthusiasm and my desire to complete the Qur’an.”
As for the contestant Sallet Hisham from Uganda, he is a student at Al-Qasimia University, and he came three years ago to the UAE to complete his studies in the specialization of the Noble Qur’an, indicating that he began memorizing the Holy Qur’an at the hands of his father, who was six years old, and he sealed it at the age of fifteen. Between memorizing the Noble Qur’an in the mosque, and academic study.
And he previously participated in the Al Qasimia competition in twenty parts, and won the second place, and this is the second participation in a Quranic competition, and the first participation in an international competition in the whole Quran.
He pointed out that he leads the worshipers in Tarawih prayers in the mosques, and that he received a scholarship at Al-Qasimia University.

Emirates Food Bank launches a campaign to distribute 50,000 meals during one day in Ramadan