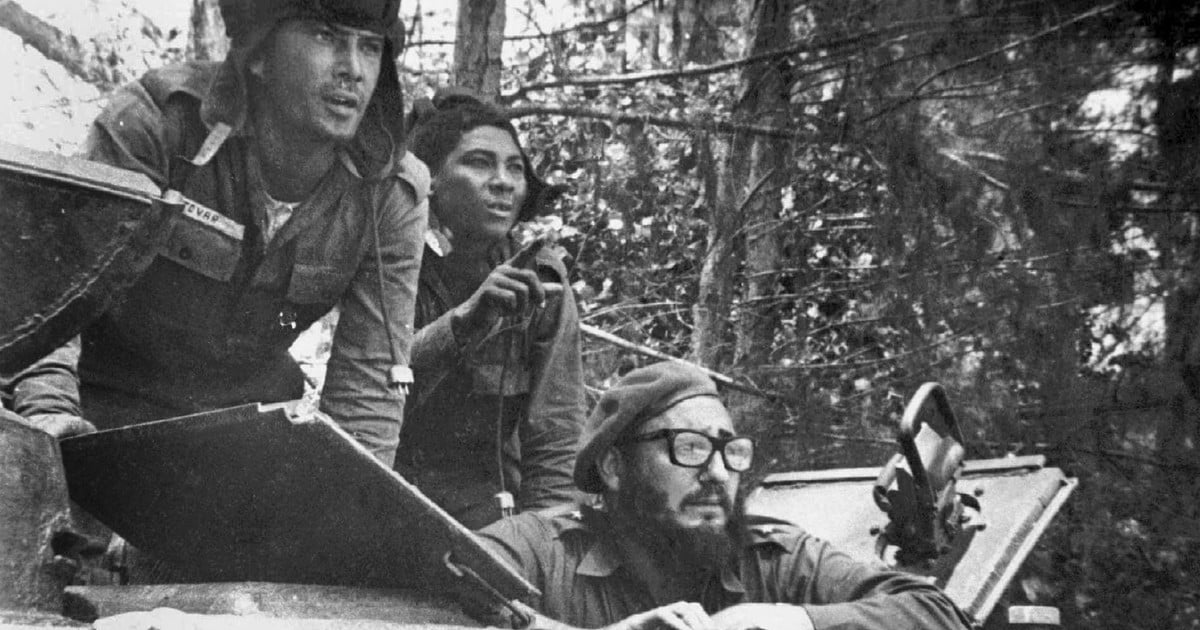 The CIA plan was very simple, at least on paper: some 1,500 anti-Castro exiles would land by surprise in Bay of Pigs, they would seize a nearby airfield so that a new government could land to Cuba and then they would overthrow Fidel Castro with the enthusiastic support of the population.

The reality, however, turned out somewhat different: their ships ran aground on the reefs, they were shot and in less than twenty-four hours they already had twenty thousand Castro soldiers in front of them. Three days after landing, the invasion had already failed. One hundred exiles died and another 1,200 were taken prisoner.

This April 17 marks the sixtieth anniversary of a landing that is still remembered today as one of the great disasters in the history of American espionage.

An operation full of errors that not only failed in its immediate objective of overthrowing Castro, but also involved an international humiliation for Washington and laid the foundations for the Cuban Missile Crisis, which a year later would bring the US and the USSR to the brink of nuclear war.

The event also ended up poisoning the relations of two neighboring countries, Cuba and the United States, which are still at odds today.

Cuban counterrevolutionaries, trained by the US, ended up in prison after the Bay of Pigs invasion in April 1961. Photo: AFP

A cluster of errors

The seeds of that failure were planted long before the exiles set foot in Girón Beach, as the place of landing is known in Cuba.

Some failures can be attributed to bad luck, but many others have to do with poor planning and overconfidence in the US, which came from winning every war it had fought.

The rookie President John F. Kennedy inherited from Dwight Eisenhower an operation that he did not quite convince, but that he did not want to cancel. He went ahead with a plan that contained some of the same mistakes his country would make soon after in Vietnam and much later in Afghanistan and Iraq. Basic errors.

The anniversary of the Bay of Pigs invasion coincides with the 8th Congress of the Communist Party of Cuba, in which Raúl Castro leaves the position of more power. Photo: XINHUA

When Castro came to power in January 1959, he took the US off the hook. Only two weeks before the flight of the dictator Fulgencio Batista, President Eisenhower was surprised when he was informed of the rapid advance of the revolutionaries.

The CIA agents in Cuba, on the other hand, had few doubts about what was going to happen on the island and maintained good relations with the Castro environment.

It has even been published that the agency financed it at some point, and the then ambassador to Cuba, a fervent anti-communist, wrote in his memoirs that “it makes no sense to send an ambassador to a country if the CIA representatives are going to go on their own and doing the opposite ”.

fidel castro and his revolutionary forces, during the invasion of the Bay of Pigs (Playa Girón) in April 1961, in Cuba. Photo: AP

In any case, if there was ever a good relationship, it didn’t last long. Three months after coming to power, Fidel secretly met with then-Vice President Richard Nixon, but his policies didn’t take long to pit him against Washington. The United States was used to ruling Cuba and now saw its neighbor approach the USSR in the middle of the Cold War.

In addition, the new government confiscated assets worth about 17 billion euros today from US companies and citizens.

Just a year after Castro came to power, President Eisenhower ordered the CIA to launch a plan to overthrow him and severed relations with his government.

That’s the plan Kennedy inherits when he comes to the White House in early 1961. At that time, The CIA is already training and equipping a contingent of anti-Castro exiles in Guatemala so that they disembark in Cuba.

The operation is based on two basic errors: the first is that, to succeed, it needs the Cuban population to receive the invaders as liberators and join the revolt; the second is that all preparations must be made in secret, to catch Castro off guard.

However, it is not easy to quietly recruit 1,500 Cuban exiles in Florida, and Cuban espionage knows that there are training camps in Guatemala six months before the landing.

Nor is it that some of the exile leaders did much to hide it. Six days before the invasion, the man who, according to the CIA, was to head the island’s government after Castro’s overthrow appeared on the cover of the New York Times calling on the Cubans to take up arms and openly discussing the possibility of an invasion.

José Miró Cardona, who had been head of government after the triumph of the Revolution and Castro’s ambassador to Spain, also told the New York newspaper that he was not receiving support or speaking with the CIA.

Kennedy had approved the operation a couple of months earlier, but he still had doubts. Some of his advisers had warned him about slim chance of victory of Cuban exiles, but the president’s great fear was rather that US support for the operation would be so obvious that it would force the USSR to fight back.

In the middle of the Cold War, Nikita Khrushchev could exact his revenge not only by supporting Fidel Castro, but by striking back at the Americans in another part of the globe, for example, at the Berlin Wall.

The start of the operation

That attempt at secrecy on the part of the United States conditioned the invasion. The operation had to start two days before disembarkation, specifically with a series of bombings that they were to destroy the small Cuban air force.

For this, the CIA made available to the exiles eight antiquated B-26 bombers, which had entered service during World War II, and also trained some anti-Castro pilots. They painted the devices to make them pass as Cuban planes and promote the idea that there was also a coup against Castro “from within.”

The bombing operation was a failure, because the B-26s failed to destroy most of their targets, but, in addition, President Kennedy canceled a second wave scheduled for the eve of the invasion.

In this way, Castro not only kept his air force, but also received a valuable warning that the operation was imminent and had time to prepare. By the time the US president called off that second bombing, the die was probably cast for the anti-Castroites.

At dawn on April 17, an anti-Castro agent lit a green flare at Playa Girón to guide the landing force, and the locals immediately notified authorities that the expected invasion had arrived.

From the outset, Castro’s aviation was able to harass the invaders from the sky and managed to sink some of their supply ships.

Only two days later, when defeat was already imminent, Kennedy authorized the intervention of several disguised American planes to escort the anti-Castro bombers on a new mission.

The president of John Fitzgerald Kennedy signing the order of naval blockade of Cuba at the White House in Washington, DC, during the Cuban missiles crisis. The National Archives will release 2,800 records on October 26, 2017 about the assassination of President John F. Kennedy, but is delaying the publication of some “sensitive” files, administration officials said. President Donald Trump agreed to delay the release of some documents related to the November 22, 1963 assassination at the request of the CIA, FBI and other agencies, the officials said. / AFP PHOTO / AFP FILES / – US Washington John Fitzgerald Kennedy US declassification of documents on the assassination of John F. Kennedy declassification of secret documents

The B-26s were an hour late for the appointment because they got the time zone confused, and Cuban aviation shot down each and every one of them. Total defeat came that same day.

Castro could get his chest out. A poor Caribbean country of seven million inhabitants had beaten the first world power, of 180 million. The Kennedy administration tried, at first, to ignore the operation and pretend it had nothing to do with it, but world public opinion had no doubts.

The spectacular failure of a mission designed to prevent Soviet Communism from sneaking into America’s backyard had the opposite effect. Castro embraced the USSR even tighter, as was seen the following year, when Moscow tried to deploy nuclear missiles on the island and the two powers staged the worst episode of tension in the entire Cold War.

Washington had to learn a valuable lesson in the Bay of Pigs, that of not taking for granted that his own are going to be received as liberating heroes every time they arrive in a country.

It is a tragic mistake that they made again in Vietnam, just a few years later, and that they repeated again in Afghanistan and Iraq, after the 9/11 attacks. However, there are people who suffered the consequences of the failed invasion in a much more direct and personal way.

The 1,200 men Castro took prisoner remained imprisoned in Cuba for more than a year, until the island government and the Kennedy administration reached an agreement to bring them back to the United States.

After several unsuccessful negotiations, which included a former first lady (Eleanor Roosevelt) and the president’s brother, Robert, Washington promised to pay the equivalent of almost 400 million euros in medicine and food in exchange for Castro letting go to Florida. to the survivors.

Twenty months after the invasion, on December 23, 1962, Christmas Eve, the first plane with freed prisoners landed in Miami. A few days later, some of those Bay of Pigs veterans presented Kennedy with a flag of their brigade in a solemn act, and the president promised them that he would “return it to them in a free Havana.”

Kennedy would be assassinated a year later, the last survivors of the invasion would still take a year and a half to return to the United States and the flag in question is today in a museum. For now, in Havana, the heirs of Fidel Castro continue to command.

These 6 new games get touch controls on xCloud

“The Golden Arrow” and the War of the 27th of Ramadan

Oil production has decreased in Russia