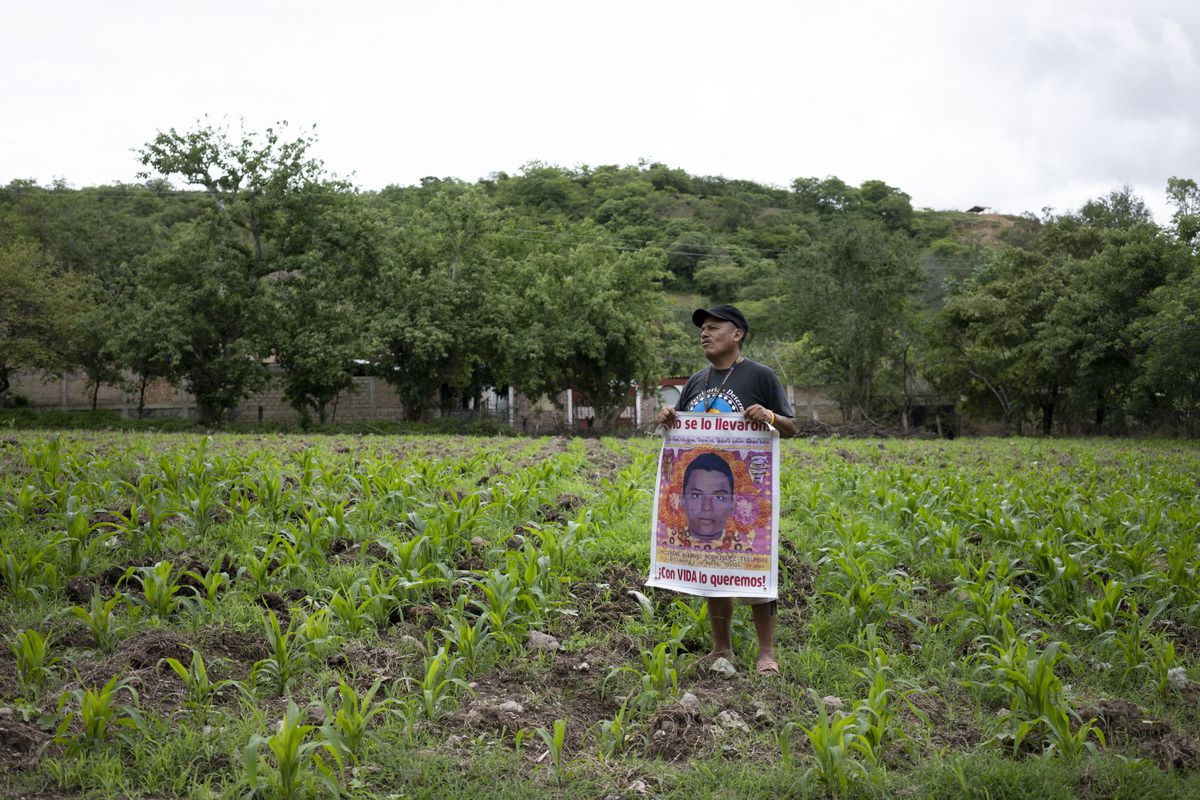 Surrounded by hills, Clemente Rodríguez’s cornfield seems these days the happy consequence of a genuine interest in botany. Rodríguez doesn’t take two steps without pointing to a plum “wand”, a “little tree” that sprouted when he was already considered dead, a pine that he himself planted when he was a child. “He used to come here a lot with Christian,” she says, referring to her son. As he does with trees, the man walks and evokes old anecdotes with Christian, like that time when some bees attacked them, or that time when a snake ate one of the boy’s pigeons. Crumbs of an ancient nostalgia appear in his voice, as if grasping the edges of a distant memory.

Rodríguez, who turns 54 in November, has spent the past seven searching for her son. A student from the Ayotzinapa Rural Normal School, Christian Rodríguez was one of the 43 students who disappeared on September 26, 2014 in Iguala, in the state of Guerrero, 100 kilometers northeast of the school. A criminal network made up of authorities and criminals attacked the normalistas that day, who had traveled to Iguala to take buses to travel days later to Mexico City, to commemorate the Tlatelolco massacre.

It is now two years since the new administration of the prosecution took over the case. In this time, investigators have turned history on its head, denying the main lines of the attack established by their predecessors. Unable for the moment to give a comprehensive explanation of what happened, their success lies in the identification of bones of two of the 43 students. Two weeks ago, the prosecutor, Omar Gómez, reported the discovery of a vertebra that belonged to Jhosivani Guerrero in life. Gómez also explained that the experts had located a piece of the heel of Christian Rodríguez’s foot. In his case, it was the second bone fragment authorities found. Just a year ago they found the first one, another piece of a bone from the foot.

“There are many questions I still have,” says Clemente Rodríguez. “If they killed him, how did they do it? Where did they do it? ”, He reflects,“ they still have to do a lot of research ”. If they killed him, he says, because in the end they only found two tiny pieces of foot bones. And people, he adds, can live without a foot. It is not that Rodríguez stubbornly clings to a rather remote possibility, that his son has survived all these years and that he can be out there, hidden, trapped. Rather, it signals the need to understand, to be explained, to be treated with respect. Especially after how things were the first years.

In November 2014, the administration of Enrique Peña Nieto (2012-2018) declared the 43 dead. In a sadly remembered press conference, the prosecutor at the time, Jesús Murillo, explained that the Guerreros Unidos criminal group had attacked the students. in Iguala. Municipal policemen had helped. The criminals had murdered the boys, burned their remains on a pyre in the garbage dump in the neighboring town of Cocula, and then dumped the remains into a nearby river. The finding in the river of some bones that in life had belonged to one of the 43, Alexander Mora, somehow confirmed the official version.

Led by Tomás Zerón, head of the field investigators, that story soon began to unravel. Both the group of experts commissioned to Mexico by the Inter-American Commission on Human Rights (IACHR) and the team of Argentine experts, world experts in analyzing cases of human rights violations, pointed out that the Cocula garbage dump had not registered a fire of the magnitude needed to burn 43 students. The Argentine experts also denounced that the discovery of the remains of the student Mora had occurred without them, who had worked in the area with the experts of the prosecution, witnessing it.

Zerón, Murillo and their people fell back. They tried to launch the idea that maybe the pyre had not burned 43, but a smaller group of students. But the cracks advanced. The investigators had constructed their version of events based on the testimonies of alleged members of Guerreros Unidos, detained and interrogated for the case. Over time it was also learned that a good part of them had been tortured. In 2018, months before the Peña Nieto government ended, the Office of the United Nations High Commissioner for Human Rights in Mexico noted that at least 34 detainees had been tortured.

Once the garbage dump paradigm has been overcome, the emptiness makes the families of the 43 uncomfortable. “I don’t want my condolences,” says Clemente Rodríguez, “I want justice to be done.” Both for them and for the prosecutor Gómez, the story of the garbage dump and the river was a montage. But at the moment there are not many more explanations. It is possible that a group ended up in the Cocula garbage dump, as the ombudsman’s office noted in its report on the case, presented in late 2018. But there is no compelling evidence of this.

For this reason, the discovery of the bones of Christian Rodríguez and Jhosivani Guerrero is the thread that the current administration of the prosecution seizes. Your task is not easy. On the one hand, the investigators are working to clarify the case, the attack, its motives, the fate of the normalistas, a major issue for the president, Andrés Manuel López Obrador, since he became president. On the other, they try to unravel the web of cover-up that they say was woven by their predecessors. Not surprisingly, several of them are already in prison and others, in the case of Tomás Zerón, in search and capture.

Located 800 meters from the omnipresent garbage dump, the place where they found the remains of the two boys, the ravine of the carnage, appears as well as the current center of the investigations. The prosecution arrived there thanks to the statements of a protected witness, detained years ago by the people of Tomás Zerón, identified as the leader of Guerreros Unidos in the area. But despite the discovery of the remains, the researchers have not explained how the ravine would have arrived. Did they kill them there or did they just leave them?

The challenge now is precisely to build the narrative, to know what happened and why. The prosecution assumes that Guerreros Unidos was an important part of the attack. Over the years, the understanding of the criminal group is greater and now it is known that they were not a small local network, that they had international reach and that they received the support of national authorities, in the case of the Federal Police. Researchers not only fight against the passage of time, but against the very complexity of a case that, over the years, has branched out to infinity.

As the IACHR experts explained a few years ago, the Iguala attack transcended the municipality and affected dozens of kilometers around. Not for nothing, the prosecutor Gómez came to say a few days ago that the most important future scenario could be a mining town 75 kilometers from there, Carrizalillo. Clemente Rodríguez and other family members were at the scene in May, handing out flyers with the face of their son and the other normalistas. “I’m going to continue until the last consequences,” ditch the man.