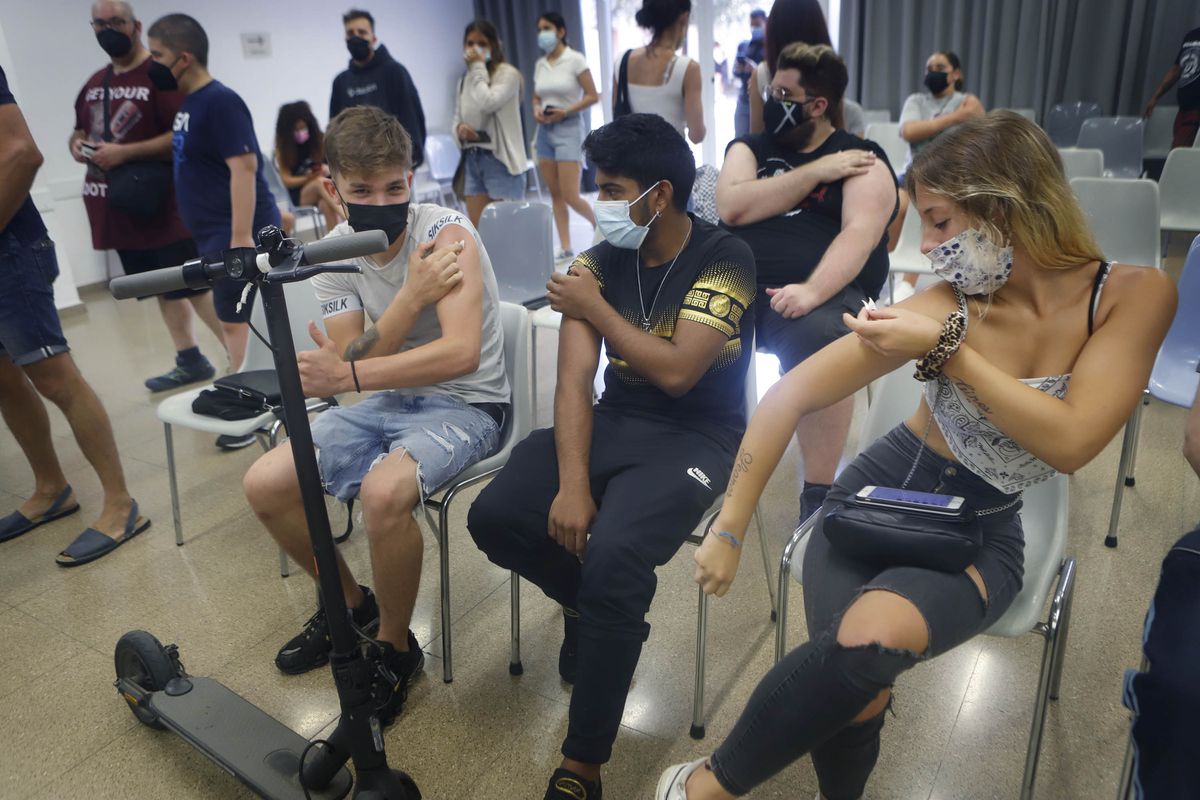 The autonomous communities are beginning to look for arms in which to inject the millions of doses that are arriving in Spain. The lean times are over. Anyone over the age of 12 who wants can now ask for a turn in most regions: 13 of the 17 are calling or have opened self-appointment for all age groups. Some, such as the Balearic Islands, Catalonia and Andalusia, are setting up points where not even a prior appointment is necessary (only for people over 40, in the Andalusian case). In Murcia, its president has made a call to cover 30,000 shifts that were free, the same thing that has happened in the Basque Country, with 57,000 vacancies.

This same week they have started with the entire target population (over 12 years old, for minors there is no approved vaccine) Madrid, Catalonia, Castilla-La Mancha, Extremadura, La Rioja and some provinces of Castilla y León, where the opposition criticizes that no self-appointment has been opened, as the Government promised for August. Andalusia did it on Sunday. They joined others that had already been vaccinating at all ages: the Basque Country, the Canary Islands, Murcia, the Balearic Islands, Navarra and Aragón. The Valencian Community is concerned about those who are old enough to be immunized and did not receive their injection, so it has started a massive campaign to re-fish them by sending text messages proposing various dates to this population. Galicia and Asturias continue to lower the age to advance with adolescents, but they have not yet reached 12 years. The furthest behind is Cantabria, which has not yet begun to puncture those under 18.

The rate of vaccination, however, is still good in Spain. Better than most western countries. According to the latest report from the Ministry of Health, 9 out of 10 people over 40 are fully vaccinated and more than 60% of the population has already received the full guideline, a percentage that only exceeds Canada among the 50 most populous countries in the world. according to Our World In Data, a repository powered by the University of Oxford. But in some autonomous communities the holidays have been mixed with a massive arrival of doses (about 15 million from Pfizer and Moderna in August) and there are already more vaccines than people available to puncture them.

This is the case in the Basque Country, where its Deputy Minister of Health, José Luis Quintas, has asked young people to cover the 57,000 available shifts until September. Something similar happens in Murcia, where there are 30,000 free appointments. A spokeswoman for the Ministry of Health explains: “The president made an appeal because this week it was observed that there were more gaps for all age groups than usual, so he recalled the importance of vaccination with the aim of immunize the entire population as soon as possible with the doses that are available ”. The spokeswoman emphasizes that the response of young people is being good: “The percentage of coverage of the 12 to 19 age bracket is practically 40%; it is the group that in just one week has managed to achieve the highest vaccination rate ”.

Galician youths also seem to attend the call, where the self-appointment system for those between 16 and 22 years old collapsed due to the avalanche of petitions. The 25,000 appointments for punctures were sold out last Saturday in just seven hours and there were numerous complaints from users about the malfunction of the system, which was continuously blocked and even prevented downloading covid certificates, necessary to access the interior of the hospitality in the seven largest cities in the community, or make an appointment in primary care.

In Andalusia, however, they recognize that the holidays are hindering progress to some extent, although they demand more doses, something that this and other communities have been doing since practically the moment Araceli Rosario Hidalgo received the first injection against covid in Spain. at the end of December.

2.9 million doses in a week

Last week 2.9 million doses were injected throughout the country, a million more than the previous one, weighed down by a lower availability of drugs in July. In August the arrival has accelerated again and, with it, the punctures; It remains to be seen if levels such as those of June are reached, when the four million weekly vaccinations were exceeded.

It seems difficult to return to that rhythm. As more of the population is immunized, moving forward becomes more complicated and even more so on vacation. Jaime Jesús Pérez, vice president of the Spanish Vaccination Association, explained to EL PAÍS that although the population of all ages is responding well, when the youngest bands reach 50% the speed begins to decrease. In the last two weeks, the Catalan Health Department ensures that it has detected a decrease in the number of previous appointments and an increase in people who, despite having an appointment, do not show up at the vaccination point.

Other countries, such as Germany, the United States, France or Italy stagnated when they carried around half of the population with the full guideline. In Spain, with a great historical predisposition to vaccination and with almost no contrary movements, it has not happened yet. It is about to outnumber Israel, one of the pioneer countries, in immunized population, which very quickly approached 60%, but slowed its progress from there. The Jewish state is in 62.3% of the population with double standards.

The pace that Spain achieves in the three weeks remaining to August will determine whether the 70% target set by the Prime Minister, Pedro Sánchez, last April is reached. It was a more ambitious goal than the one proposed by the European Commission itself, which initially sought to reach 70% of the vaccinable population in summer: at that time, of legal age, today anyone over 12 years of age. For the smallest (11% of the population) there are no approved drugs, at the moment. This outlines a short term in which rising above 70% will be increasingly complicated: if children, the population that is reluctant to vaccines or those who cannot receive them for social or health reasons are subtracted, the ceiling is estimated not well beyond 80% in Spain.

For this reason, achieving group protection will be very difficult. That 70% is a merely symbolic goal. When it was drawn, it was thought that this figure could include herd immunity, that point where there are so many protected people that the virus no longer has a place to spread and ends up disappearing in a territory. More contagious variants have led to the fact that a much higher percentage is needed to achieve this goal, surely greater than 90%, according to many scientists. So much so that the trend of virologists and epidemiologists now is to speak more of a control of the epidemic, with few and mostly mild cases, than of group protection that allows eliminating the virus.

Zemfira filed a lawsuit against Grishkovets, who called her a drug addict