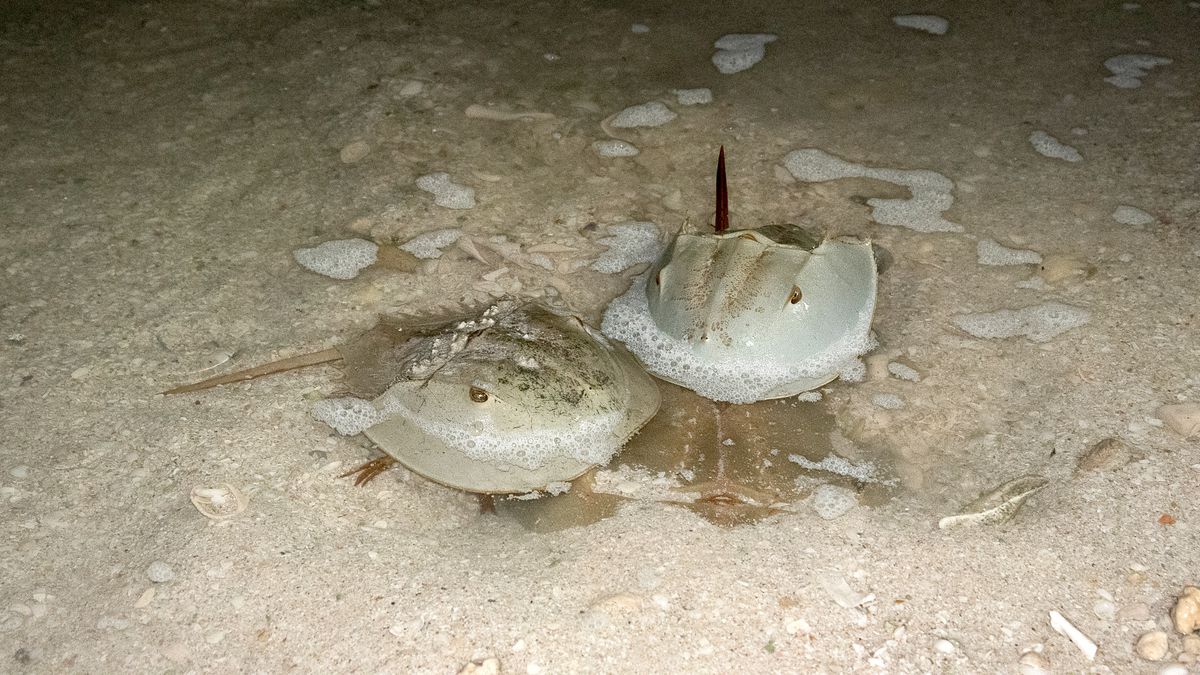 It is an animal difficult to imagine. The Limulus Polyphemus It has five pairs of eyes, which allow it to orient itself while swimming, detect and move toward light, and identify some shades of the ultraviolet spectrum in sunlight and moonlight. They can see in virtually every direction: forward, backward, up, and down. It has five pairs of legs with small claws and another pair that helps them bury themselves under the sand. They are extremities that help them to move, but also to grind their food. They have an exoskeleton, a very hard shell, and a long, pointed tail that may seem threatening, but that they mainly use to turn around when they stand up and move from side to side. And his blood has an enzyme that, when in contact with oxygen, turns a very strong and fluorescent blue color, and that contains a secret that is worth millions of dollars in the global pharmaceutical industry.

See also  Ukraine, Draghi briefing in the Senate: what he said

The scientific name alludes to Polyphemus, the most famous of the Cyclopes, an ogre who was the son of Poseidon in Greek mythology. In America they call it a horseshoe crab, but he doesn’t have much to do with crabs. Actually, it is more closely related to scorpions and spiders. Further south in the Atlantic Ocean, in the Yucatan Peninsula, the only region in Mexico where they are present, their anatomy has set the imagination of those who have encountered them on their way to flight. This has been reflected in the stories of the Spanish conquerors and in the Popol Vuh, the sacred book of the Mayans. and even in The Simpson. Today it is known as little guitar, little soldier and sea cockroach, although the most common reference is cacerolita de mar or mex [mesh]the Mayan word that still survives in the peninsula.

“The mex it is as important in the culture of Yucatan as the pheasant or the deer, but unfortunately it is likely that in 10 or 15 years we will no longer have it with us, ”says the doctor in Marine Sciences Juan Sandoval Gio, an academic from the Technological Institute of Tizimin. The sea pot is a chapter in Yucatecan memory, of children who went to the beach and were fascinated by the little animals. Sandoval Gio was one of those children. He is now a scientist who focuses his studies on the animal and who warns that for decades, there have been fewer and fewer cacerolitas and they are less and less well known. Limulus polyphemus is a threatened species of extinction in Mexico. “The disappearance of this animal would mean erasing a part of the history of Yucatan,” he says.

“We are talking about a living fossil,” explains Sandoval Gio. Sea pans are the closest living relative to trilobites and the earliest specimens date back between 250 and 200 million years. They are older than the dinosaurs. “They have survived several mass extinctions and are an open book to understand what the planet was like millions of years ago,” adds the specialist.

Biologist Héctor Ortiz, an academic from the Technological Institute of Chetumal, reports that it is a panchronic species: extraordinarily old and with very few evolutionary changes. It is precisely that window to the past, that antiquity, which is one of its main attractions for scientists, but also for the pharmaceutical industry. Their blue blood, also known as hemolymph, is extracted from thousands of specimens in the United States, where there are much larger populations than in Yucatan, in industrial quantities. The animal’s immune system is so archaic that its blood clots when it detects foreign pathogens. It is a crude and effective intrusion detection system and is widely applied in vaccine purity testing.

Limulus amebocyte lysate, the substance that is extracted from the mex for scientific testing, it is key to drug development. A gallon of blue blood (3.78 liters) is priced at up to $60,000 in the United States, where extraction is legal. Ortiz explains that up to 50 and 400 milliliters per organism can be removed, depending on its size and maturity. Most of the animals survive the “milking”, although the literature reviewed by Ortiz indicates that around 30% die. There are no conclusive studies on mortality, but there are many indications and cuts of the impact over time. Overharvesting of sea pans has caused their populations in the United States to plummet 75% from the 1980s to the early 2000s, according to the US Fish and Wildlife Service, a government agency.

Since then, the European Union has promoted synthetic alternatives to animal-derived amebocyte lysate, but their use has not been approved in the United States. In 2020, when the covid-19 pandemic broke out and the world was desperately searching for vaccines, several American media such as National Geographic echoed the concerns of environmental organizations that multi-prototype purity testing against the coronavirus could further reduce sea pan populations, but there is not enough scientific evidence to show that impact.

However, there are articles in specialized magazines that document the harvest of sea pans since the end of the 19th century, mainly for use as fertilizers in the agricultural industry. It was until the seventies when the boom of the lysate as a biomedical application. In Asia, varieties similar to the American horseshoe crab are consumed as food among the population, even several decades ago they were also consumed in Mexico, according to the researchers consulted, although it is already a very rare practice. There are also natural predators such as birds and small mammals that eat them when they reach the coast to spawn or fertilize the eggs. A female can lay tens of thousands of eggs in her lifetime, although only a fraction will make it to adulthood.

In Mexico, the threats are different. For years, residents of protected areas have denounced illegal extraction by fishermen. Sea pans are high in protein, which attracts octopuses. A single piece can be used as bait about 10 times, according to research by Sandoval Gio, Ortiz and other scholars. The researchers sampled populations in two areas of the peninsula to measure the impact. At the beginning of the 2017 octopus fishing season, they found 24 specimens in San Felipe and 22 in Río Lagartos. Few per se. A year later, at the beginning of the 2018 season, they only found two organisms in Río Lagartos and none in San Felipe.

In recent years, the Federal Attorney for Environmental Protection has seized more than a hundred sea pots on several occasions to curb poaching for fishing. Boats are stopped, animals are seized, but the problem persists. The last complaints that reached the press are just from last January. The harvest per kilo of cacerolitas de mar is bought in some of the poorest municipalities in Yucatan at 100 pesos per kilo (less than five dollars), according to local media.

It is not the only threat documented by the researchers. A study by Sandoval Gio published a few months ago has found glyphosate for the first time in dead specimens of sea cacerolitas. How does a pesticide get into the body of an arthropod? The researcher points out that the use of chemicals in extensive crops in Yucatan, where the soil is calcareous and very porous, causes the toxic substances to end up in the aquifers and from there in the estuaries where the mex. The problem becomes a potential snowball: from crops to saucepans, from illegal extraction to octopus fishing and from the plate to the human body. “It’s a chain,” explains the academic. Mexico banned the use of glyphosate in January 2021.

Added to pollution is an aggressive policy of changes in the type of land use triggered by the explosion of tourism. The critical habitats of sea pans are getting smaller, Ortiz warns. On the right flank of the Yucatan peninsula, tourism is bustling along the Riviera Maya corridor and other coastal areas of the peninsula, some of them protected areas, look askance at the arrival of foreign currency and visitors.

Ortiz has been studying this species for more than two decades. The researcher recalls field trips to Holbox in the late 1990s, a small fishing village on a paradisiacal semi-island, almost where the Mexican Caribbean begins. There was nothing. The streets were not paved. There were no sidewalks or motorized vehicles. “When you arrived at the dock you saw the saucepans arrive,” he underlines. And suddenly tourism appeared: there is more and more garbage, more hotels, more trucks and more houses in areas where construction was not allowed, as well as hammocks, palapas and bars on the beach, where pans usually reproduce. “It’s very sad, it’s a great deterioration,” he laments. In Champotón, in the State of Campeche, Ortiz remembers seeing cacerolitas looking for places to spawn on floors covered by cement. “You don’t see the saucepans anymore, there are very few,” he warns.

“It is a species little studied and valued in Mexico,” says Ortiz. Local researchers have realized in recent years that they had to join forces to get deeper into their work. They have promoted environmental education in local communities so that their environmental and cultural value is recognized. And they push for coordinated and effective conservation efforts. To preserve a unique species, naturally shy, increasingly hidden and scarce, which has survived millions of years, but did not count on man.

Pékerman, protagonist of the memes, after defeat against Argentina

F1 22 proven: the life of real drivers, including safety cars