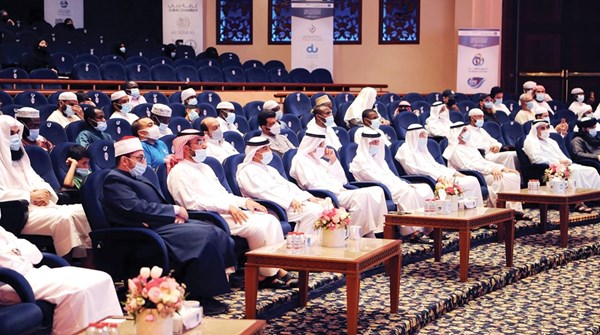 Followers of the Sheikh Hamdan bin Rashid tournament in the Dubai International Prize for the Holy Qur’an have confirmed that the American contestant of Somali origin, Abdul-Ghani Mustafa, is competing for the first place for the current year, due to his strength in memorization, confidence in performance and beauty of voice, and Mustafa is considered the first contestant Since the start of the competition, the bells of the international jury have been silent, as he did not commit any mistake in memorizing, and he performed the five questions yesterday evening, “Saturday”, without any warning being addressed to him by the international jury.
The contestant who started memorizing the Book of God at the age of three showed a high ability to memorize, even as if he was reading from the Qur’an, not unseen, and his performance was characterized by reassurance, beauty, quality exits, and the introduction of rulings on intonation. Mustafa, aged 19, participated in Quranic competitions in the United States, in which he obtained advanced positions, and also participated in the Junaid competition in Bahrain in 2017, then the Dubai Now competition, which is the second international competition in which he participates.
This contestant is considered an extension of the distinction of his country, the United States, in its participation in the Dubai International Qur’an Award, as it won first place in many of the participations in previous sessions, and one of the very advanced places won the list of honor, which included the top 10 contestants in each session.
Followers of the activities of the fourth day of the competition at the Culture and Science Symposium in Dubai indicated that the Egyptian contestant, Muhammad Omar Ubada, aged 24, is the second distinguished contestant, and competitors strongly for the honor list positions, after everyone was dazzled by the beauty of his voice, the reverence of his recitation, and the feeling of tranquility on the listeners or viewers. For his recitation, he described the performance of the contestant Ubada, who came a year and a half ago to the Emirates and taught in the specialization of the Arabic language, as living the verses and paying attention to the sound outputs, and possessing a high ability to follow the rules of intonation. Only two warnings he received in the fourth question did not affect this contestant, but he is a strong candidate for reaching the first places, as it is expected that the honor list for the current session will not be devoid of this contestant. The competition activities continued for the fourth day in a row. The competition opened with a fragrant reading of evidences from the Holy Quran with the voice of the reciter Alaeddin Hamza Maghazi. Four contestants competed for the Book of God, namely: Khalil Ahmad from Afghanistan, Muhammad Omar Ubadah Omar Arafa from Egypt, and Maraj. Idi Ibrahim from Tanzania.

Self-made story
In a meeting with the contestants, the contestant Khalil Kul Ahmed, representative of Afghanistan, said: “I came to the UAE in 2019 to lead the Imamate of the Ali bin Abi Talib Mosque in the Emirate of Sharjah, and when I heard him about the good life in this good country.”
He added: “I was born in Saudi Arabia in Jeddah, and there I memorized the Noble Qur’an at the age of nine by my uncle, may God have mercy on him. Then I moved to memorization centers until I finished it in six years. distance”.
He said: “My teacher who authorized me in the Noble Qur’an in the Emirates told me about the competition, so I did not hesitate to participate, especially since it is my first participation in a Qur’anic competition, and I am aware of the status of such competitions and their importance for the one who memorizes the Qur’an.”
He added: “When I was young, I did not know the value of memorizing, and what it means to be a keeper of the Book of God, and I did not know the value of that until after it was sealed, and had it not been for my father who stood beside me when I was in childhood and adulthood, I would not have completed memorization.”
While the contestant, Maraj Idi Ibrahim, a representative of Tanzania, stated that he came to the United Arab Emirates about three years ago as a student at Al-Qasimia University in the College of the Holy Qur’an. He began memorizing the Noble Qur’an at the age of nine and sealed it in two years.
He pointed out that his parents were keen on memorizing the Holy Qur’an, especially his mother, who was the first fan of him, as well as his father, a graduate of the Islamic University of Saudi Arabia, who both heard about the competition from social media and encouraged him to participate in it.

Garcia, the sixth most common last name in the United States