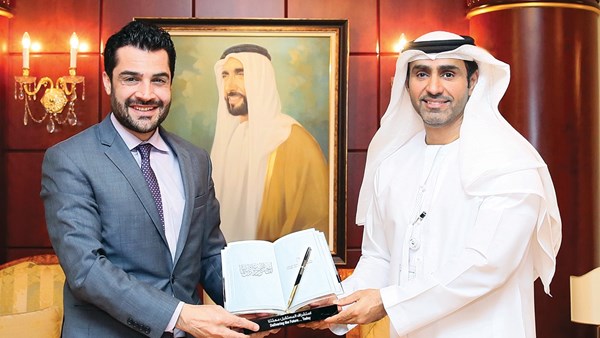 Dr. Sultan Muhammad Al-Nuaimi, Director General of the Emirates Center for Strategic Studies and Research, received yesterday morning Ahmed Javid, Ambassador of the Islamic Republic of Afghanistan to the country, at the center’s headquarters in Abu Dhabi.
The Director General of the Center welcomed the Afghan ambassador, praising the bilateral relations between the United Arab Emirates and the Islamic Republic of Afghanistan, which is witnessing continuous development thanks to the support of the leadership of the two friendly countries. With the Republic of Afghanistan, and support its stability and development.
For his part, the Afghan ambassador praised the level of bilateral relations between the two countries, expressing appreciation for the UAE’s humanitarian and development efforts worldwide, especially the efforts made to support the Afghan people, which reflect the UAE’s firm principles of human solidarity and the spread of good throughout the world. The ambassador also praised the Emirates Center for Strategic Studies and Research, which he described as a beacon for scientific research at the regional and international levels, and praised the efforts made by the center since its establishment in the fields of research, studies, conferences and scientific publications.
Dr. Al-Nuaimi emphasized that the Emirates Center seeks to play an active role in strengthening bilateral relations with Afghanistan, through various events and activities that bring the Afghan issue closer to the decision-makers in the United Arab Emirates.
At the end of the meeting, Dr. Sultan Al-Nuaimi presented a memorial shield to Ambassador Ahmed Javid, thanking him for his visit and wishing him success in his work, in a way that contributes to strengthening bilateral relations between the UAE and the Republic of Afghanistan.

Brazil: caravans in 50 cities called for Bolsonaro’s dismissal, due to the management of the pandemic

Contact reduction could last until the end of the vaccination campaign