The Aeroparque recovered its runway: they built the new one in record time and in March the flights could return 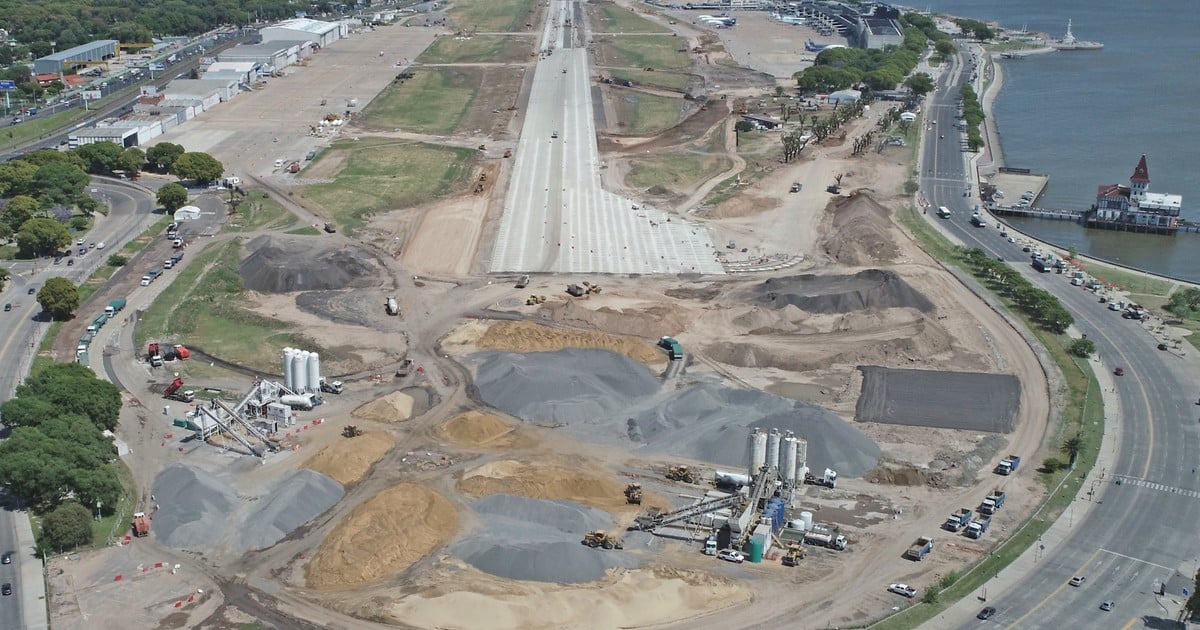 Jorge Newbery Airport is recovering its appearance. For now, you already have your clue, made new. While it remains closed, without receiving or dispatching flights since August, it is being subjected to a process of renovation and modernization for which it was necessary to demolish the old runway and other sectors that were obsolete and unable to absorb the number of passengers that every year They use this air terminal. With a work progress of 70%As confirmed by the authorities, it is estimated that by March 15 it will be operational again.

With national and international flights operating at a minimum due to the coronavirus pandemic, a unique opportunity presented itself: to close the Airport to make it the first comprehensive improvement work in decades. The last major renovation had been carried out in the 70s, before the World Cup. Then there were modernization works in some areas, but they were partial.

One of the curiosities at this stage was the complete demolition of the old track, the original one. It was carried out in November and part of the remains and debris were used to fill the new, a concrete corridor that runs parallel to Cantilo and Costanera Norte avenues.

In November the old airfield runway was demolished. Less than two months later, they finished the new one. Photo Maxi Failla

The new track has 2,700 meters of extension, 590 meters more than before. It totaled 340 meters to the north and 250 to the south. It is also wider: it measures 60 meters, when it was 40 before. And 5 meters of concrete and 7.5 meters on each side of the asphalt concrete will be added.

The new runway at the Aeroparque is 2,700 meters long.

“The track itself is finished. Now they are working on the filming, which are the streets through which airplanes access it, and on the margins. Also in the strips, which are those grass cloths on the sides, because they have to be leveled, “says architect Jorge Leggieri, manager of Airport Infrastructure Works of the Regulatory Body of the National Airport System (ORSNA).

Now they are building the taxiways, which are what planes use to access or leave the runway.

The taxiways to which it refers are also used as express exits, which allow an aircraft to go to the apron after landing. In this way the operation is streamlined and the runway is freed for new takeoffs or landings.

The ORSNA confirmed Clarion that at the end of December there was a certified work progress of 65% and that these days 70% was reached.

The Aeroparque renovation work is 70% complete.

The work includes a new arrivals and departures hall for international flights, with greater infrastructure and comfort for passengers. It will be located next to where the north parking lot is today. The need to expand the international terminal arises because the idea is that all flights to countries in the region will operate again from this metropolitan airport. For this reason, the boarding lounges, the security and immigration controls, the dispatch and baggage pick-up areas and the check-in area will gain space.

“The building work is 45% complete -Requires Leggieri-. It may seem little, but it must be taken into account that the progress of a work is measured based on the percentage of the investment spent so far. And generally the equipment and everything that is placed in the final stages of the architecture, which includes from air conditioning equipment to lighting fixtures, has a large weight in that investment “.

The building of the future international terminal is now 45% complete. The image is from November. Photo Maxi Failla

Another important part of the renovation is linked to beaconing. Like Ezeiza, the Aeroparque will have category 3, which will allow it to take off and land in adverse weather conditions. “Almost all of the airports in the country have a category 1 beacon, which is enough to operate,” they explain from the concessionaire Airports Argentina 2000.

Airports Argentina 2000 carried out the design, bidding, contracting and construction management process. The ORSNA evaluates and approves it and, in addition, is in charge of supervising and certifying. The works are financed with public funds assigned specifically by the Trust for the Strengthening of the National Airport System (FFSNA). Is about an investment of $ 5,000 million.

With the degree of progress achieved to date, the delivery time of the work is estimated by March 15. Once the works have been completed, it will take a few more days to test the entire infrastructure.

“Work is being done to reach the agreed deadlines. By then the airport will be operational, although its reopening will depend on the health situation,” Leggieri explains. And he assures that meeting these deadlines is the greatest challenge of this work, due to its great magnitude.

The work of the Jorge Newbery Airport will be finished by March 15.

Aeroparque is the airport with the highest passenger flow of the country, still above Ezeiza. According to the latest official numbers prepared and published, in 2017 13,261,437 passengers passed through Jorge Newbery, compared to 9,679,689 at the Ministro Pistarini airport. The movement of aircraft also reflects this demand: they operated 123,077 at Aeroparque, compared to 80,890 at Ezeiza.

The pandemic, but more specifically the quarantine, represented an unprecedented opportunity to work without limitations or interference. You have to think that, in general and in normal times, the Airport is left without operating for a strip of just four or five hours, during the early hours of the morning. In other words, the complete renovation would have been impossible.

Germany announced the surprise of the West from the Russian vaccine