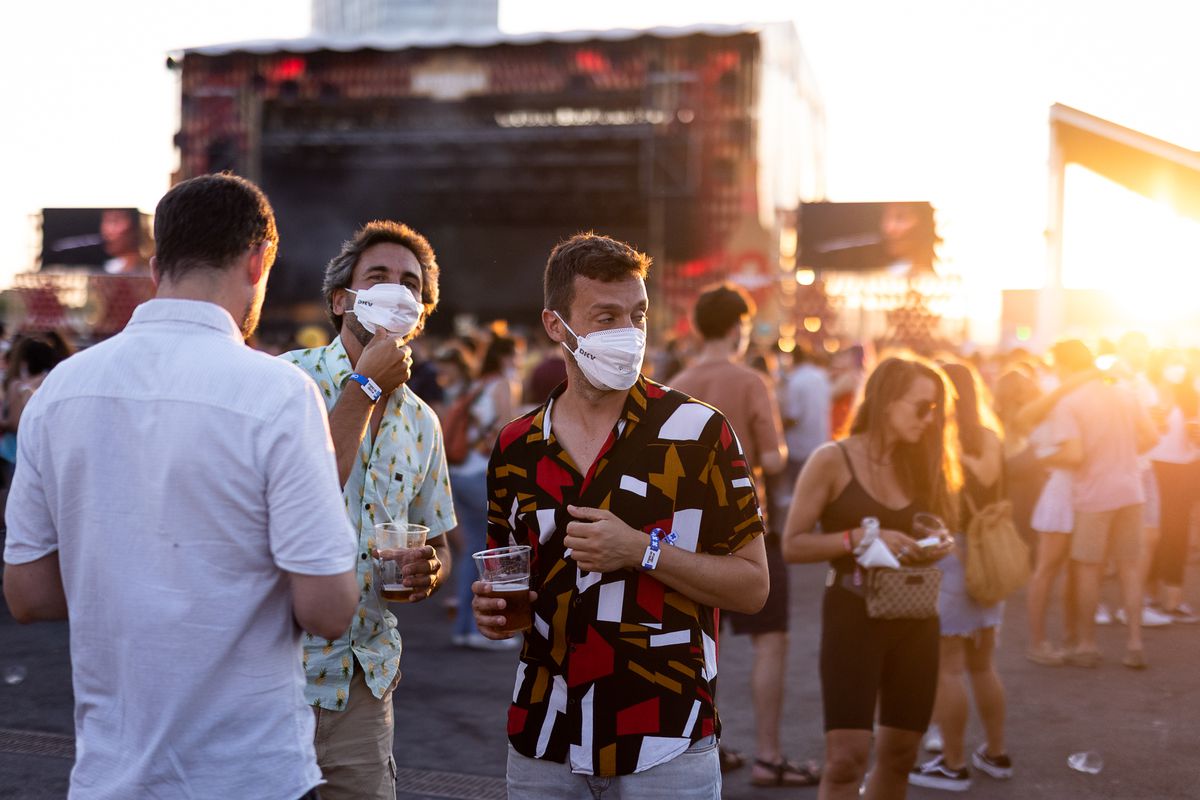 The covid does not give truce in Spain and the epidemic curve continues unbridled in this fifth wave of explosive growth. The accumulated incidence at 14 days has shot up 80% in the last week and, in the absence of two communities (Balearic Islands and Catalonia) that this Monday have not reported the data, it already reaches 368 cases per 100,000 inhabitants. The vaccination campaign has become the key factor that marks the evolution of the pandemic and, with about 46% of the Spanish population with the complete schedule, infections are primed with those under 30 years of age, the population group that has not yet has accessed the vaccine in a massive way: thus, the accumulated incidence in twentysomethings has shot up to about 800 cases per 100,000 inhabitants. With this scenario on the table, the communities rush the implementation of new measures and return the toughest restrictions to the game board: the Valencian Community, for example, has already obtained the endorsement of justice to decree a new curfew in 32 municipalities and the limitation of meetings throughout its territory. The Canary Islands have also asked for the restriction of night mobility and Catalonia, which last week closed nightlife, has approved bringing the closure of non-essential activities forward to 0.30 and limiting social gatherings to a maximum of 10 people. In a similar vein, from this Tuesday Asturias closes the interior of nightlife. Other communities, such as Madrid, rule out applying new restrictions at this time.

The director of the Center for Health Alerts and Emergencies, Fernando Simón, admitted this Monday that the forecast is that infections will continue to grow in the coming days. “In two days we will be rising above 400 [casos por 100.000 habitantes a 14 días]″ Said the epidemiologist. The peak of the epidemic curve, he indicated, is expected to be close, but he has not dared to specify a date. He has pointed out, yes, that “a reduction in the speed of the increase is being observed.”

On the street and at the doors of health centers, however, there are no signs of this slowdown in growth: the pandemic continues unstoppable and threatens to overwhelm primary care. In fact, Catalonia, which has the highest rate of contagion in Spain (more than 2,000 cases per 100,000 among twenty-somethings) has already announced that it will stop performing diagnostic tests on asymptomatic close contacts in the face of the flood of cases and the healthcare pressure that besets to health centers. “The pressure is now being borne by the primary care and public health services. If we continue to have very large incidences of those who are not vaccinated, we can have an impact on hospitals and there may be communities that have excessive pressure ”, Simón has warned.

The director of the Center for the Coordination of Health Alerts and Emergencies, Fernando Simón, during a press conference to report on the progress of the fifth wave in Spain. On video, Simón’s statements. R.Rubio.POOL (EUROPA PRESS)

As the bulk of infections occur in young people and the vast majority of the vulnerable population is already fully vaccinated and, therefore, protected, the evolution of this new virus challenge is presumed different from what happened in other waves. Most young people experience the disease mildly or asymptomatically and do not require admission, so, predictably, hospital occupancy will be much lower than at other times of the pandemic. Although Simón warns that zero risk does not exist: one in 100 people under 30 years of age will end up admitted. “When we begin to increase the total number of cases, in the end, the gross number hospitalized will be a significant number and it will be noticed in the hospital occupancy levels,” he warned. Hospital occupancy is still far from the healthcare pressure reached in the last waves, but it has already grown by 43% in the last week – there are 3,892 people with covid admitted -, and also the number of patients in intensive care (ICU) is it has increased almost 17% in seven days – there are 719 people in critical condition.

With this outlook looming, some communities have begun to pull heavy artillery and have dusted off some of the restrictions from the toughest moments of the pandemic. Even without the endorsement of the state of alarm, which functioned as a legal umbrella for measures that implied limitations of fundamental rights, the Valencian Community has managed to impose a curfew from 1.00 to 6.00 in 32 municipalities with more than 5,000 inhabitants and limit the meetings with 10 people throughout its territory. The Superior Court of Justice of the community has endorsed the decision of the Valencian Government considering that it is a “balanced” measure and that it meets the “proportionality” criterion.

The court has alluded to the explosion of cases, the risk of collapse of primary care and the threat of the delta variant, which is up to 60% more contagious, according to the European Center for Disease Control (ECDC, for its acronym in English), to endorse the restrictions in the Valencian Community. The Canary Islands, for their part, have also asked their Superior to allow a curfew to be applied to the islands that are in alert level 3, a condition that right now only Tenerife meets, reports Efe.

Also Catalonia, which already made a strong decision last week to close nightlife (except outdoors), has gone a step further and this Monday the Government has announced the limitation of public and private meetings to a maximum of 10 people and the closure of all non-essential activities at 0.30, the last border before requesting the curfew. The limitation of meetings concerns a fundamental right, so the Catalan Executive will need the approval of justice to carry out this measure.

Navarra also obtained the endorsement of justice last week for its decision to advance the closure of nightlife to one o’clock in the morning. The judges considered that it was “an ideal, necessary and proportionate measure to contain the spread of the virus among the unvaccinated population, young people, due to the direct relationship between the very high rate of infections among unvaccinated young people and leisure activities. once the school year is over, with relaxation of self-protection measures both in end-of-year trips and in social gatherings and nightlife ”. Asturias closes the interior of nightlife from this Tuesday and Galicia has announced that it will reduce the number of people who can gather on the terraces (currently there are 15).

This Tuesday, the president of the Community of Madrid said that she discarded new restrictions in the region: “For now, we are doing well in Madrid. Be attentive, of course, but what we have to do now is not to continue affecting commerce and the hospitality industry as long as it is not necessary ”, commented Isabel Díaz Ayuso. The incidence in the community is high, 224 diagnoses per 100,000 inhabitants in the last two weeks, but it is almost 150 points below the national average.

In his appearance on Tuesday, the vice president of the Junta de Andalucía, Juan Marín, has not announced new restrictions, but has left on the table the possibility of adopting new measures in the face of the increase in infections, such as the “regulation” of leisure night (not the closure) or even perimeter confinements of some municipalities with very high incidence rates, such as more than 1,000 cases per 100,000 inhabitants. “The health experts will determine whether or not it is convenient to propose a perimeter closure of a municipality or make other decisions,” said Marín.

The return of the toughest restrictions has also brought with it, however, the disparity of opinion between the different autonomous judicial bodies. Thus, although justice endorsed measures in the Valencian Community or in Navarra, the Superior Court of Justice of Aragon has overturned the hourly limitation in hospitality imposed by the regional Executive: the justice has responded to the request of the hotelier associations and, Despite the fact that the community has a cumulative incidence of over 420 cases per 100,000 inhabitants – more than 1,300 in twentysomethings and adolescents – it has cautiously annulled the measures that affected the capacity and the early closure of the hotel business at 11pm and leisure night at 00:30. The Government of Aragon has already appealed.

Justice has also rejected the decision of the Junta de Andalucía to apply a perimeter confinement in the municipality of Peal de Becerro, in Jaén, considering that the order of the Ministry of Health does not comply with the principles of motivation, proportionality, necessity and suitability necessary in relation to the intensity of the intended measure.