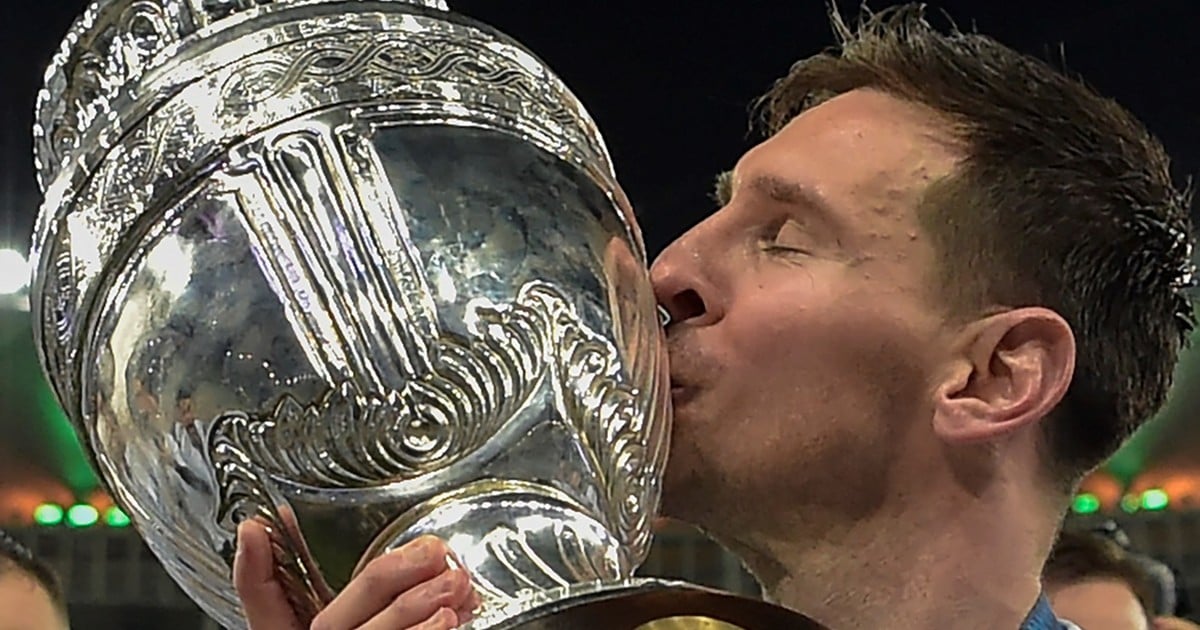 I watched the Argentina game with José Luis, a lifelong friend, and his 24-year-old son Xoa.

Santi, one of my children, at his mother’s house with his childhood friends. Ignacio, the other, at his grandmother’s house (he had promised to dine there and did not want to change plans). My children saw champion to Argentina for the first time in their life. Xoa too.

They send me to the family group a video of the hand of one of my children honking the horn, celebrating. I got emotional, I cried.

This was a tough year, for me, for everyone.

I cried with the hug of Leo with Scaloni, I cried more with Neymar’s (I applaud his nobility and talent) with Messi.

Messi receives the affection of the Argentines upon arriving in the country. Photo REUTERS / Matias Baglietto.

Sorry leo. Sorry on behalf of all and all Argentines.

A few years ago, when you left the national team, I wrote “Messi did not resign, we all cast him out.” In this successful country, crusher of idols, on Saturday Messi was received from eternal.

The guy who makes millions of euros is crying in the middle of the court showing his children “look, look at this” and kissing the gold medal.

Lio is yours, and the cup too.

Proud father sharing his day, his moment (and he had so many before) but this one was missing. And we made it delay.

Messi celebrating with a smile bigger than Maracana. And I cried with her tears.

Everyone on their feet, Buenos Aires, Barcelona and Qatar (because Messi is a great, but we had to wait for him to raise the glass to realize it). Sight yes we will be imbeciles (and I say it sadly) that we made him quit.

But no, he came back, he banked it, he insisted and cried. Of anger 4 years ago, of happiness last night.

He took off his mufa, they say in the neighborhood. You took off your Lio mufa, and I was kissing the medal once more.

There is a man who went to sleep biting the pillow for not being able to give his country the glory that it gave him on Saturday at the Maracana and with nothing less than Brazil.

We understand nothing, or almost nothing.

I don’t think Messi reads this note (hopefully he does) but if he reads it, I would like him to don’t forgive us at all. Because if you forgive us, maybe we will forget.

And I, who am an inveterate optimist, do not want to forget, this is how we learn.

In this world of immediacy, in this world where a soccer coach loses two games and leaves. Where the fan bitches wildly today to the player who gave him the victory yesterday. A world without memory a world of cannibal success that does not forgive.

Messi sat down not one, not two, for many years biting the pillow and wondering why? And he stayed, he banked it and insisted.

And we all exploit, for him, because he deserves it, we owed it to him. He to us nothing, we to him, very, very much.

The great goalkeeper Emiliano “dra “Martínez, who is a kid, could not believe – I imagine – embracing this glory, he cried and pointed to it as saying:” Look who is here, clap standing Gentlemen. “Thanks ,dra, thanks Scaloni, thanks to the whole team, thanks from the heart.

The kid Montiel with him blown ankle but what was going to leave the field? They had to get it between 10! The noodle Di María who also had a revenge, running and scoring the goal of the final. The claw, the heart on the court with 2000 Argentines of privileged spectators. What a luxury, what you want to be there.

Yesterday I said to my son Santi “Did you see the Obelisk? Full of people, we forgot about the pandemic.” “And what do you want?” He answered. “Messi was champion.”

And I am right and he is right.

But Santi is right, there are reasons that the heart does not understand.

Leo champion, full of glory around the world and with the weight of a history in his country and that’s it. Now to vent and learn.

When I get angry sometimes (and who am I to get angry) because of the miseries of football-company, yesterday they reconciled me with the most beautiful thing about this sport what I love.

Like when I hugged my children on the San Lorenzo field in 2014 when they won the Libertadores, or my old man when we were world champions in 86. And now my children are screaming for the first time Argentina champion.

How cute, but let’s not forget.

The images of Neymar and Messi relaxed after the game toured the world. Photo REUTERS / Ricardo Moraes

What does Messi teach us?

✔ That we cannot (or yes, but we must not) lower our arms. Thiago, Ciro, Mateo, look at dad. He did not give up, but not since the speech. From putting leather and leather. The greatest one fought her and fought her. Today he raises the glass and kisses the medal and shows them proudly. This is how Lio is taught, not with speeches, with facts and consistency. “Never give up”, we have to learn that.

✔That we have to remove the “never enough”. “Did you get an 8? Where did you go wrong?” Tyrant Fathers and Peoples that destroy illusions and the possibility of learning and growing.

✔ What the error is part of the way. In life one stumbles and one gets up again. And then you enjoy it so much, but so much more. The photo of the celebration is the result of much waiting, suffering and, above all, working to turn history around. Because there is no use waiting with folded arms. We are protagonists, not spectators of our history.

✔ That we have to raise the threshold of frustration, which you have to click until it rings. Let us allow error, let us allow it, because from there we grow.

✔ That we have to review, but really, our way of seeing life. Messi dressed in humility. He, who could really be the most arrogant of the arrogant, ate the anger, the sadness, the impotence and took off his mufa, he taught good living.

✔Where they hug you like that, that’s there. What a nice photo of Messi and Neymar post-match. In the world of for himself who can, who has the biggest navel, standing applause for the players. What if we learn? What if we narrow the crack that hurts us so much? If we add to a world with bright eyes where there are things that do us good without fucking anyone? If we try?

The world celebrates (as I write this note, my friend José gives me a video from Bangladesh where they celebrate the triumph of Argentina). Yesterday Diego passed the tape and the ball to Leo and said: “Tomá, follow you now.”

Thank you guys, thank you Leo, but do not forgive us completely, because if we do not we will not learn more.

*Alexander Schujman is a psychologist specializing in families. Author of I do not flee, I only fly: The art of letting go of children, Ni-Ni Generation, It is not because I say so and Tools for parents.