The 50 years of ‘total football’, a philosophy that was born with Ajax in the Netherlands and is still in force today, from Guardiola to Simeone 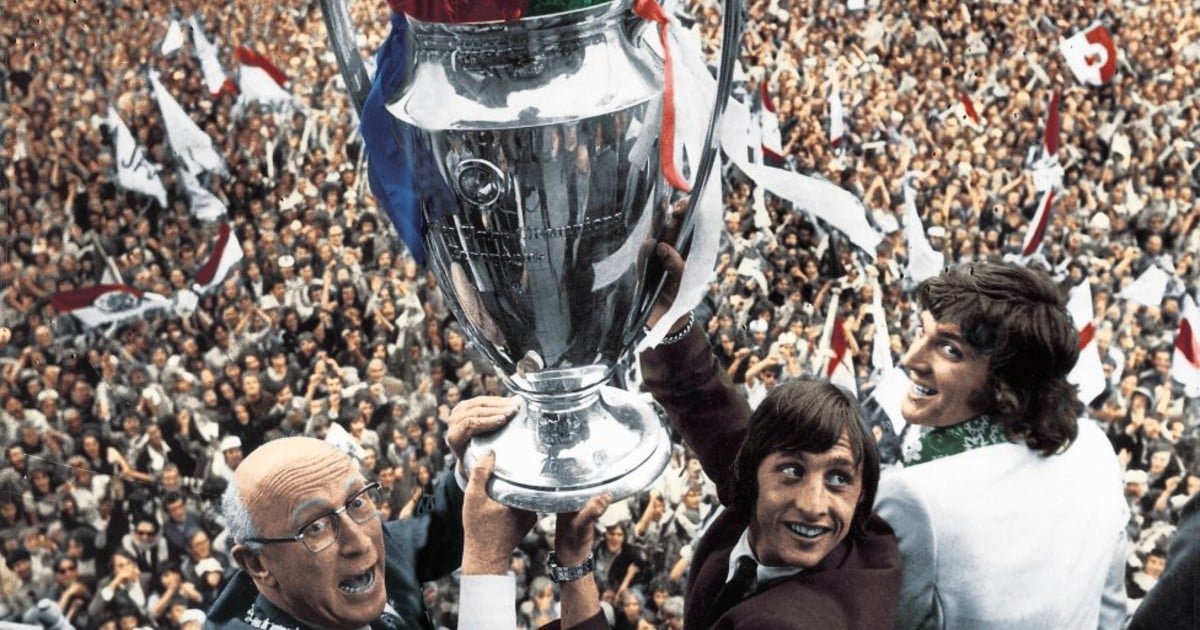 If football was born in the elite English schools of the mid-nineteenth century, the re-founding of the game occurred fifty years ago. It is a week of celebration. Or it should be. On June 2, 1971, Ajax beat Panathinaikos the end of the European Champions Cup, the current Champions League.

The world discovered the embryo of the Mechanical orange, the Holland of the World Cup 74. The new Bible of the ball had started to roll. And it is still valid. You only need to look at some contemporary teams and the speech (or the intentions) of some coaches, even those with opposite messages about what this game should be that continues to seduce crowds.

Ajax was a modest team from Amsterdam where a certain Rinus michels he had played in the postwar period (1945-58). “The best way to defend is to attack,” he said. A statement of principles that he imposed as a coach when he took over the team in 1965.

Six years it took in shaping the revolution and in the middle suffered the defeat in the first European final against Milan (4-1) and the following year had to endure that Feyenoord (classic rival) was the champion. That team had Willem van Hanegem, a lefty ten, all crack. Feyenoord played the Intercontinental 1970 with Estudiantes: 2-2 in the Bombonera and then 1-0 for the Dutch in Rotterdam.

Stuy; Neeskens, Hulshoff, Vasovic, Suurbier; Rijnders, Mühren, Cruyff; Swart, Van Dijk and Keizer was the initial formation of a squad where others were already appearing who would continue the story: Krol, Rep, Haan.

With that Ajax there was a change of command. The English continued throwing centers to “9”, in Italy they still trusted him catenaccio, the Germans prepared the hegemony of Bayern then transferred to the National Team and Spain continued with The fury Born in that phrase “to me, Sabino, that I run over them”, that in 1920 in Antwerp Belauste had shouted asking for a pass that ended in a goal with him and four Swedish players inside the goal.

Change from The fury the team that owns Spain champion in South Africa 2010 must be sought in Guardiola’s Barcelona, ​​in turn heir to that of Frank Rijkaard and in turn recovering the Dream team from Cruyff from the 90’s. In short, everything refers to Holland. And to that Ajax early 70’s.

“Everyone should know how to play everything.” In the lower Ajax, the children they were not assigned a fixed position until they were between 13 and 15 years old, while they learned the secrets of each position, which was assigned to them after physical development and according to the characteristics of each one. But everyone had to know what to do in each position. In La Masía, even today the same thing happens.

Michels adopted one system for all sections of the club: 4-3-3, with possible variations to 3-4-3. That “tactical drawing” was a mere instrument to execute the idea when the ball started to roll: to recover as soon as possible. It was easy to understand: the closer to the rival goal he recovered, the fewer meters he had to travel to the goal.

What did you do when you got the ball? They all moved. Some offering to receive short, taking the mark. And if the mark was not there, the empty space remained. Then someone was going into space. Pressing, constant movement and technique. All of that, across the field, for as long as possible. Total soccer.

There was a precedent. “My quintita has 110 by 70”, said Alfredo Di Stéfano, who played “total football” in Madrid. But I was the only one and almost twenty years before of Michels imposing it on Ajax.

Michels left the club after Wembley and signed for Barcelona. The post went to Stefan Kovacs and Inter reached 2-0 in the 1972 European final. The title was faced by Independiente, champion of the Libertadores. Cruyff lasted a quarter of an hour at 1-1 in Avellaneda, injured by Dante Mírcoli.

The 3-0 in Amsterdam defined the Intercontinental for the Dutch. The next year, european triplet by beating Juventus 1-0. And the end of the period, because Cruyff would go to Barcelona to meet with Michels. And after World Cup 74, Neeskens would be added.

“Footballers should be able to play in all positions on the field. That is why it is so important to train them and to listen to the coach. The left winger cannot fall asleep when the coach talks about the right back”Cruyff said, fond of the effect of the phrases as a shock. Another of his sentences: “Ajax played football that was not normal to see in Europe in those years.”

And it wasn’t. That’s why Holland astonishment in the ’74 World Cup. It was directed by Michels, who curiously only had 7 of the 22 players from his old Ajax: Cruyff, Haan, Krol, Neeskens, Suurbier and Rep, present in the final with Germany, plus the veteran Keizer.

Holland lost the final. Nobody remembers the second? 47 years passed from that final. Of Ajax gene, half a century.

The legacy remained. On Louis Van Gaal, Sure. There is a certain “Ajax spirit” in Marcelo Bielsa’s teams. Not to mention those of Guardiola and even those of Diego Simeone, although they have not seen Michels-Kovacs play: Pep was born in 1971, the Cholo in 1970. But the Catalan had Cruyff and Simeone is an obsessive scholar and adds what he adds. Like José Mourinho. Y Thomas tuchel. And Jürgen Klopp. Because the bible it’s for everyone.