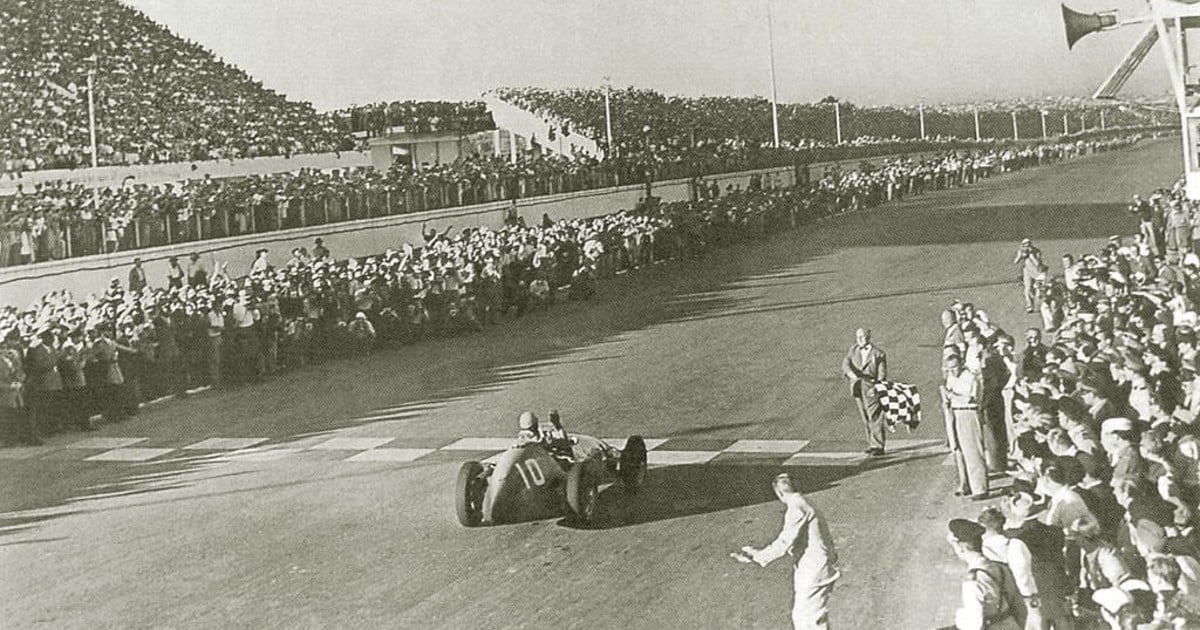 -What do you need?

On March 9, 1952, a year and a half after that talk between Juan Domingo Perón and Juan Manuel Fangio, the 17 de Octubre Autodrome was inaugurated in Villa Soldati. And 10 months later, Formula 1 played its first Argentine Grand Prix there. The heat of that January 18, 1953, the overflow of the public and the tragedy due to the neglect of Nino Farina in which 9 people officially died -although it is estimated that there were more than 30- marked that race, which also remained in the memory for being the only one by Oscar Gálvez.

Buenos Aires was not an unknown terrain for the pilots of that first stage of F1, nor was the Harrier. In the framework of the International Seasons, Europeans traveled to these latitudes to race with the Grand Prix cars that were the foundations of Formula 1. And in 1949, on a track that went around the lake of regattas of the Bosques de Palermo , the then two-time TC champion had won the III Eva Duarte de Perón Grand Prize in the rain.

Four years later, the reunion was not only that of Gálvez with Giuseppe Farina or Alberto Ascari. Also the reissue of the duels with Fangio, who was also racing again after that serious accident at the 1952 Italian GP at Monza.

The heat was the other particular ingredient of an appointment held in the middle of summer, with a thermometer that read 40 degrees, as well as the euphoria of the public and Perón, which allowed the entry (free) to be extended from 70 thousand -maximum capacity of the venue- to 160 thousand spectators, which caused people to fill the stands and also be located on the sides of the track of circuit number 2, as they used to do in the Road Tourism tests.

That recklessness caused the tragedy on lap 32. According to reports at the time, it was a boy who crossed the track when the Italian Nino Farina approached. The first champion of Formula 1 made a maneuver to avoid it but ended up going outside and impacting the public that had overflowed the police control.

Full stands and people on the side of the asphalt tape of circuit number 2 of the then Autodromo 17 de Octubre, today Juan and Oscar Gálvez. AGN photo

The official information speaks of 9 dead, although the number would have been about 30, in addition to dozens of injured. It was not, however, the only accident: on turn 68, Frenchman Robert Manzon lost a wheel from his Gordini, injuring two other people.

The three-hour race was halted after the tragedy that Farina unintentionally starred but continued for Ferrari to demonstrate to Maserati the superiority of its cars. Alberto Ascari he would get the first of his five victories in Buenos Aires to become two-time F1 champion in 1953 and only Froilán González’s Maserati managed to sneak onto the podium (3rd), in part thanks to Nino’s accident.

In sports, Oscar Gálvez also stood out, with his fifth place, while Fangio left when he was second when the differential of his Maserati broke. But the native of Balcarce was enough to show that he was recovered from the accident that almost cost him his life in Monza and a year later, on January 17, 1954, he took revenge and won his first race at home.

The Argentine Grand Prix changed the seasons of Formula 1, which in its first three editions began in May. The political and economic ups and downs complicated his permanence, which can be divided into three stages.

The first occurred during the heyday of Juan Manuel Fangio and Perón’s support for the sport, between 1953 and 1960 -with the exception of 1959-.

After giving South Africa the status of the first test of the year in the 1960s, the irruption of Carlos Reutemann led to the return of the category to Buenos Aires in 1972. Except in 1979, when it was not raced, and in 1981, when it passed for April, the Argentine GP opened the calendars in the first month of the year, something that wiped out South Africa in 1982.

The third cycle of F1 in the country, finally, occurred at the end of the Menemism, with the four consecutive Grand Prix between 1995 and 1998, without Argentine drivers.

Since then, several governments have tried unsuccessfully – and more publicly than with concrete actions – to attract Formula 1 to South America, where only the Brazilian Grand Prix has been held uninterruptedly since 1973 – in 1972 the race did not score for the championship – and to which only the coronavirus pandemic put a stop to it in 2020.

VPNs turn 25: networks born to save cable today protect dissidence on the internet