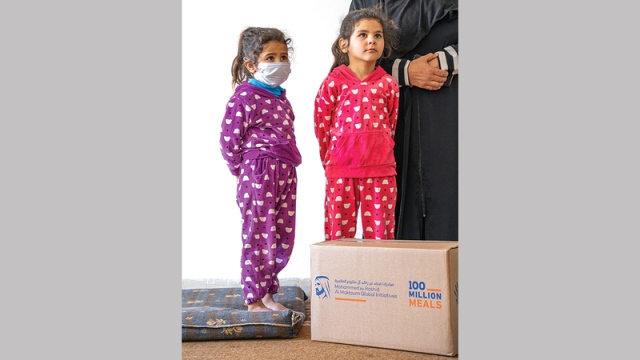 The 100 Million Meals Campaign, the largest in the region to feed food during the holy month of Ramadan in 20 Arab, Asian and African countries, in the first week since its launch, has managed to collect the equivalent of 78 million meals, achieving 78% of its goals to provide 100 million meals in lower-income communities. Through institutional and individual contributions and donations from various sectors.

Donations poured into the campaign since the first hours that followed the announcement of His Highness Sheikh Mohammed bin Rashid Al Maktoum, Vice President and Prime Minister of the UAE and Ruler of Dubai, about its launch.

By the first week of the campaign’s start, the total donations received exceeded half of the contributions required to provide for food parcels equivalent to 100 million meals for the needy.

The Minister of Cabinet Affairs and Secretary General of the Mohammed bin Rashid Al Maktoum Global Initiatives, Mohammed Abdullah Al Gergawi, said, “The achievement of this achievement reflects the keenness of the UAE society in all its categories, institutions and economic and humanitarian sectors to actively contribute to supporting the humanitarian work initiatives launched and implemented by the UAE to provide relief to the needy. Around the world ».

Al-Gergawi stressed that the campaign that feeds food and provides food support to those who deserve it comes at a time, the world is in dire need of human solidarity, and the thought of His Highness Sheikh Mohammed bin Rashid Al Maktoum is to expand the circle of charitable work that benefits people to the fullest extent, and involves everyone in achieving its goals and doubling Its direct positive impact on the lives of the underprivileged and needy.

He added: “We, in our role in the Mohammed bin Rashid Al Maktoum Global Initiatives, responded quickly to this influx of donations by starting direct distribution of food parcels in a number of countries covered by the campaign in cooperation with the Mohammed bin Rashid Al Maktoum Global Foundation, the World Food Program and the regional network of food banks to expedite the arrival of support. To those who deserve it ». A week after its launch, the campaign recorded wide social and institutional interaction through digital platforms, social media and instant messaging applications, and produced a comprehensive charitable movement. The campaign received widespread praise for its humanitarian goals and calls for intensive participation in it, and the video clip announcing the campaign was widely reposted.

The great interaction with the campaign reflected the values ​​of solidarity, generosity, compassion and solidarity rooted in the UAE society, which is keen in its various groups to extend a helping hand, relief and support the needy and the afflicted, spreading good, and mitigating the effects of crises, disasters, challenges and suffering for various peoples of the world without distinction between race, religion or region.

The cash contributions of donors, including individuals, businessmen, companies, companies, commercial groups, the business community, governmental and private institutions, economic and charitable activities, and community and humanitarian work bodies from inside and outside the country, came in succession through the four donation channels designated by the campaign.

The chief mufti, director of the Ifta Department in the Department of Islamic Affairs and Charitable Activities in Dubai, Dr. Ahmed bin Abdulaziz Al-Haddad, issued a fatwa permitting the payment of zakat in cash to buy food parcels and allocate them to needy individuals and needy families as part of the “100 million meals campaign”.

He explained that it is permissible to pay zakat in cash by purchasing meals and allocating them to needy individuals and needy families through the campaign aimed at feeding the hungry, saying: “We have to support this initiative as much as we can; Everyone as much as he can, because there is food for the hungry, the poor and the needy.

The campaign opens the door to contributing to the efforts to feed the hungry for individuals and institutions from the business community, institutions of the government and private sectors, and charitable work organizations inside and outside the country to provide support through four main channels to donate to provide food support to those who are deserving in the 20 countries covered by the campaign.

The campaign allows everyone to donate through the channels of the website www.100millionmeals.ae, and bank transfer to the account of the 100 million meals campaign in the «Dubai Islamic Bank», whose number is: (AE08 0240 0015 2097 7815 201), or through short text messages (SMS) via the numbers. Described on the website, for users of the “du” and “Etisalat” networks within the UAE. The campaign allows you to donate by contacting the campaign team directly at the call center on the toll-free number 8004999 or e-mail: [email protected]

The 100 Million Meals campaign has begun distributing food parcels in a number of countries it covers, including Egypt, Jordan and Pakistan.

• «The turnout to contribute to the campaign reflects the keenness of the UAE community to support humanitarian work initiatives.

• “We responded to the influx of donations by starting operations of distributing food parcels in a number of countries covered by the campaign.”

Endesa increases the amount of projects presented to European funds from 19,000 to 23,300