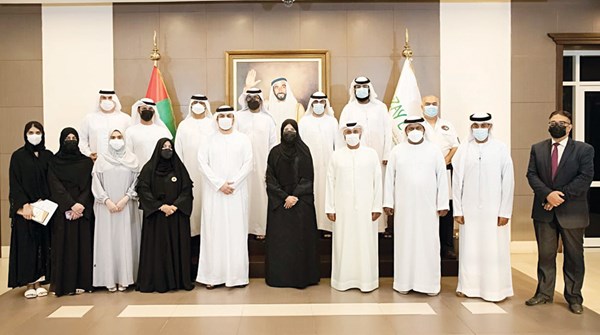 The “Thank you for your giving” volunteer team, in cooperation with the Ghaya Volunteer Team, celebrated the honoring of the volunteers of 20 teams within the “Thank you for your giving 2021” initiative on the occasion of the fiftieth year in appreciation of their efforts in volunteering.
During the ceremony held at the headquarters of the Zayed Bin Sultan Al Nahyan Charitable and Humanitarian Foundation in Abu Dhabi, in the presence of volunteer team leaders, Asmaa bint Manea Al Otaiba, Vice President of the Zayed Search and Rescue Team, an honorary member of the volunteer team, “Thank you for your giving,” confirmed that the volunteers are making great efforts that have enhanced their role. Positive service to the country and society, inspired by the values ​​of volunteer work, which is an extension of the humanitarian and authentic principles that inspire the founding father, the late Sheikh Zayed bin Sultan Al Nahyan, may God rest his soul, who instilled in our souls the values ​​of goodness, love, loyalty and helping others, based on the principles that represented the vision and civilization of the state since its establishment. .
Al-Otaiba said: We are proud that we have a group of male and female volunteers who seek goodness and love among people and put in their appreciation the opposite of the honorable image of the dear homeland, and their goal is to make others happy.
Hussain Mohammed Al Hammadi, Chairman of the Zayed Volunteer Team, stressed that honoring is not a goal in itself, but rather represents a message of love, loyalty, appreciation and gratitude to all those who gave their time and effort to serve the country and people with a sincere desire to affirm the value of volunteer work, which reflects the deep belief in its noble data and goals. More effort in the coming period in all fields of giving and setting a good example for others so that the culture of volunteerism prevails in society.

Values
Badria Juma Al Hosani, Head of the Volunteer Ghaya Team, explained that the volunteers stem from the virtuous values ​​that highlight the importance of volunteering and cooperation for the service of the country and society to enhance its importance in the lives of peoples as a human value that has many aspects that have had the greatest impact in setting an example for others who we watch scramble to contribute to all Voluntary work that emphasizes the values ​​of cooperation and solidarity for all that represents the national interest and human values. Saif Al-Rahman Amir, head of the “Thank you for your giving” volunteer team, expressed his thanks and appreciation to the Zayed Bin Sultan Al Nahyan Charitable and Humanitarian Foundation for its efforts and support for the value of volunteer work and its keenness on everything that enhances the positive role of volunteers, which represents the beautiful values ​​in volunteering and inspired by the rational leadership along with Success Partners.