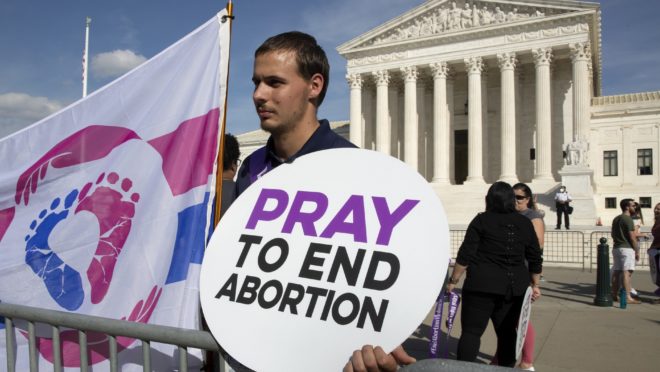 In March 2021, Democratic Party lawmakers in the United States passed a $1.9 trillion Covid-19 pandemic assistance bill that, unlike all bipartisan bills of this nature passed in 2020, did not include the Hyde amendment.

At the time, pro-life activists and members of Congress warned that without the amendment – a long-standing measure that prevents federal funding of abortion, except in cases of rape, incest and when the mother’s life is in danger – several Non-discriminated funds from the Covid-19 assistance bill could be used to fund elective abortions with federal tax money.

The Houston Chronicle reported that Democratic officials in liberal Harris County, Texas, are considering doing just that, in response to state law banning abortion after six weeks of pregnancy.

Some excerpts from the article (our italics):

“Three months after Democrats in the Harris County Court of Commissioners sought guidance on reversing Texas’s new abortion law, court political analysts on Tuesday told County Judge Lina Hidalgo that the county could use public money to support groups that help those seeking an abortion – and perhaps even to fund abortions directly (…).

Political analysts said that while the 2019 law, known as the Senate (Texan) law 22, prevents Harris County from spending local taxpayer money on abortion services, the county’s $915 million allocation, federal aid due to Covid-19, could be earmarked for this purpose.

The memo provoked an immediate reaction from the two Republicans in the Court of Commissioners and a number of conservative activists – including state representative Briscoe Cain of Deer Park – who attended Tuesday’s Court of Commissioners meeting to oppose the idea of use public resources for abortion aid services (…).

Commissioner of Precinct 3, Tom Ramsey, the other Republican on the court, suggested that Covid-19’s relief funds could be used to overturn Senate Law 8 (the Texas law restricting abortion after six months of pregnancy ), what he described as ‘money that should be spent to save lives being used to take lives’.

The memo, authored by Amy Rose, senior analyst at the Harris County Court Analyst’s Office, points out that ‘there are no restrictions on funding ancillary abortion care services,’ including with federal funding.”

See also  Dubai's sheikh will have to pay BRL 4.1 billion in divorce

Pro-life activists say the Houston Chronicle memo and report underscore the importance of ensuring that the Hyde Amendment is actually applied to the Build Back Better (BBB management proposal in the social and environmental areas) reconciliation project.

“This memo demonstrates the need for pro-life safeguards like the Hyde Amendment,” Autumn Christensen, of the pro-life organization Susan B. Anthony List, told National Review via email. “Without the Hyde Amendment tied to the BBB’s billions of dollars in healthcare grants, we can assume that abortion advocates will exploit the resources for these procedures and even circumvent state pro-life laws. If they plan to do this using funds earmarked for Covid-19, they will certainly do the same and much more with the BBB’s resources.”

The memo itself is not sure whether the federal funds passed on to state and local governments can be used to fund abortions directly. Instead, he reports that Witt O’Brien’s, a consulting firm hired by Harris County, “explains whether Coronavirus Local Fiscal Recovery Funds (CLFRF) can be used for attention abortion, that’s a Harris County decision. However, Witt O’Brien’s adds that ‘paying directly for abortion care would be more difficult to justify under the American Rescue Plan (ARP, name of the pandemic stimulus plan), but Witt O’Brien’s can take a closer look at this. hypothesis if desired’”.

But Christensen of the Susan B. Anthony List explains: “The only reason the memo hesitates on direct funding for abortion is because the (law) wording leaves open the question of whether the county can link that funding to the Covid-19 pandemic. At BBB, the resources are not linked to Covid-19”.

Gazeta do Povo’s Beliefs: Defense of Life from Conception

As the National Review reported earlier this year, a majority in the Senate supported linking the Hyde Amendment to the $1.9 trillion bill, but the House’s legal counsel pointed out that it would take at least 60 votes to do so:

“In the Senate, the majority supported the Hyde Amendment: Democratic Senators Joe Manchin of West Virginia, Bob Casey Jr. of Pennsylvania, and Tim Kaine of Virginia joined all Senate Republicans in favor of an amendment. to effectively apply the Hyde amendment to much of the bill, but Senate legal counsel pointed out that the amendment would need at least 60 votes to bind. (A reconciliation bill passes the Senate if it has a simple majority, ie 51 votes.) Rather than insisting that problematic funding be removed from the reconciliation bill and addressed in the appropriations process (subject to 60 votes), Manchin, Casey and Kaine voted for the final approval of the bill as written.”

See also  «Dubai Municipality»: emergency teams to deal with the climatic situation and a free number to contact

“Several senators [democratas] they came to me later and said, ‘I’m sorry I voted that way, we should keep the Hyde Amendment,’ ” Oklahoma Republican Senator James Lankford told the National Review in July. “I won’t say who (said that).”

Since mid-year, West Virginia Senator Joe Manchin has been adamant that the Build Back Better reconciliation bill should include the Hyde amendment. “The Hyde Amendment is a red line,” Manchin told CNN in October.

Manchin even said he hoped to retroactively apply the Hyde amendment to funding assistance due to the Covid-19 pandemic passed in March during the appropriations process. (So ​​far, Congress has not enacted new appropriations and has instead relied on “ongoing resolutions” that fund the government and maintain the status quo.)

Despite Manchin’s insistence that none of the Build Back Better project funds be used for elective abortions, House Democrats passed a reconciliation bill in November that includes several provisions that could fund elective abortions.

These include “public health” grants that don’t have the Hyde Amendment attached, and provisions to serve “non-Medicaid” populations in 12 states that refused to expand Medicaid because it could directly fund elective abortions and transportation to perform Medicaid. out-of-state abortions in the case of states capable of enforcing laws that limit or prohibit abortion. The Hyde amendment “is not in the bill,” House Speaker Nancy Pelosi told a November 18 news conference.

There are a few ways to ensure that Build Back Better project resources are not wasted on elective abortions.

See also  Last Will Cooperative: 'We are not a suicide club'

The simplest way would be to explicitly include the text of the Hyde amendment in the bill. This has been done before in reconciliation laws. While Senate legal counsel has typically held that the Hyde Amendment is subject to 60 votes on reconciliation, the 60 vote minimum is required only if a senator raises a point of order. In 1997, when Congress created the Children’s Health Insurance Program through a reconciliation bill, Democratic Senator Patty Murray’s point of order was dropped and the Hyde Amendment was permanently attached to the program.

A second route would be to cross-reference the legislation to which the Hyde Amendment would apply, such as the appropriations bill that funds Medicaid. The House Democrats’ Build Back Better bill was modified to give the impression that it would not fund abortion, but the change did not achieve that goal:

“’We saw the change that’s been made,’” says Autumn Christensen of Susan B. Anthony List. “However, it was not worded in a way that would preclude an abortion order because it makes reference to the Medicaid statute – which allows abortion – rather than referring to Medicaid appropriations, which do not allow abortion funding.”

The issue is in the legislative minutiae, but it’s important: The Hyde amendment, which bans Medicaid funding of abortion, except in rare circumstances, must be appended each year to the appropriations bill that funds the program. The Hyde Amendment is not permanently incorporated into the underlying law that created Medicaid.”

A third option would be to simply withdraw all provisions of the Build Back Better bill that could be used to fund abortion.

Concerns over Manchin’s fiscal issues over the bill dominated the headlines this week, and it’s not clear if they will ever allay. But taxpayer funding of abortion remains another issue that could derail the bill if fellow Democrats in Manchin insist on including devices in the Build Back Better bill that aren’t protected by the Hyde Amendment.

© 2021 The National Review. Published with permission. Original in english.

Call of Duty: Vanguard, reveal of the Zombies mode this week, will have demons