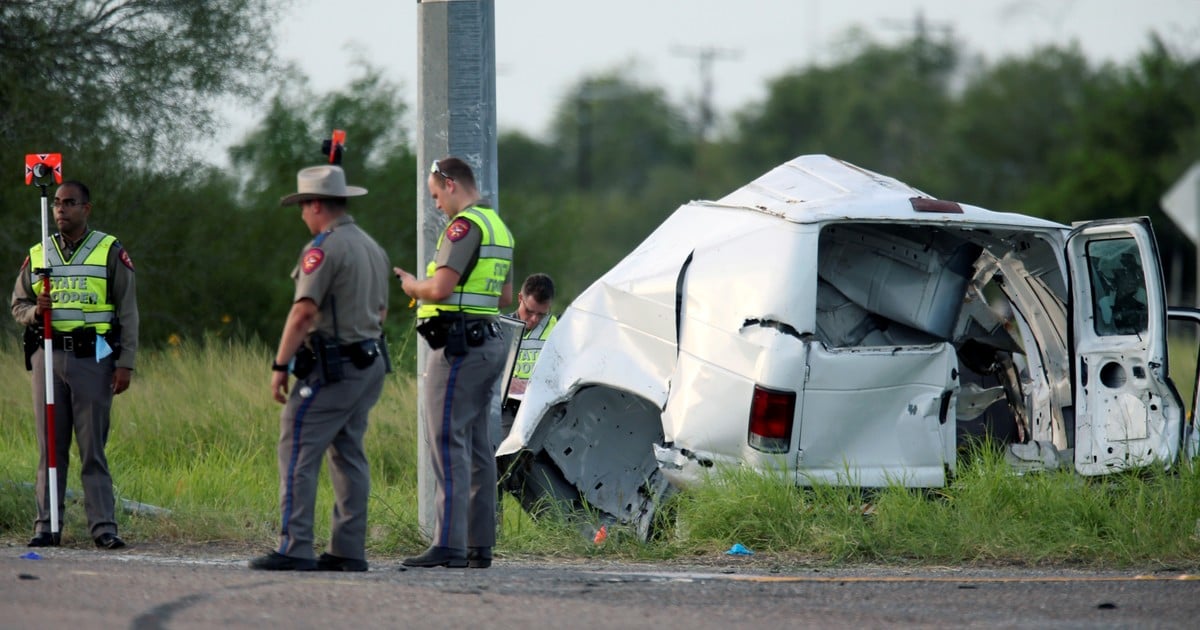 A van carrying 29 migrants crashed on a remote highway in South Texas, United States, on Wednesday, causing the death of at least 10 people, including the driver, and injuring 20 others, authorities reported.

The accident occurred shortly after 4 p.m. on Highway 281 in Encino, Texas, about 50 miles north of McAllen.

Sgt. Nathan Brandley of the Texas Department of Public Safety said the truck, designed for 15 passengers, was traveling at high speed when the driver tried to veer off the freeway onto Trade Route 281. He lost control of the vehicle and crashed into a metal pole and a stop sign.

The truck I was not being chasedsaid Urbino Martinez, the Brooks County Sheriff’s Office.

So was the scene of the accident. Photo Delcia López / The Monitor / AP

Martinez said he believes all the passengers were migrants. Brandley noted that the death toll was originally announced to be 11, but was later revised. He added that the 20 people who survived the accident have injuries between serious and critical.

The identities of the 30 passengers in the van have yet to be released, pending notification of family members, Brandley said. No information was available about the trucksuch as where it was registered or who the owner was.

Encino is a community of about 140 residents located about 3 kilometers south of the Border Patrol checkpoint in Falfurrias.

An increase in the number of migrants crossing the southern border of the United States illegally has produced a rise in accidents involving vehicles full of foreigners, who pay large sums of money to be introduced to the country.

A policeman approaches the vehicle that was transporting the illegal migrants. Photo Delcia López / The Monitor / AP

The Dallas Morning News has reported that the recruitment of young drivers for smuggling trips, coupled with speeding and reckless driving by these young people, has led to terrible accidents.

Victor M. Manjarrez Jr., director of the Center for Human Behavior and Law at the University of Texas, El Paso campus, told the newspaper that criminal organizations recruit drivers from Austin, Dallas and Houston. Others are from the El Paso area, while some more come from areas of Latin America plagued by police corruption.

“They call them: ‘If they catch you, you will go wrong’” he commented.

They are chosen from among a group of migrants seeking safe passage across the border in exchange for a discount on their smuggling quota, Manjarrez said, adding that they tell them to follow a guide vehicle. “Not bad for a few hours of work,” he said.

One of the deadliest accidents occurred on March 3, when 13 people died after a cargo truck crashed into a van carrying 25 migrants in California.

On March 17, eight migrants were killed when the van they were in collided with another vehicle while being pursued by the police. The driver faces a possible life imprisonment after pleading guilty to various federal charges on May 24. No date has been set for his sentencing hearing.