Teun Hocks thought the world could do without his art 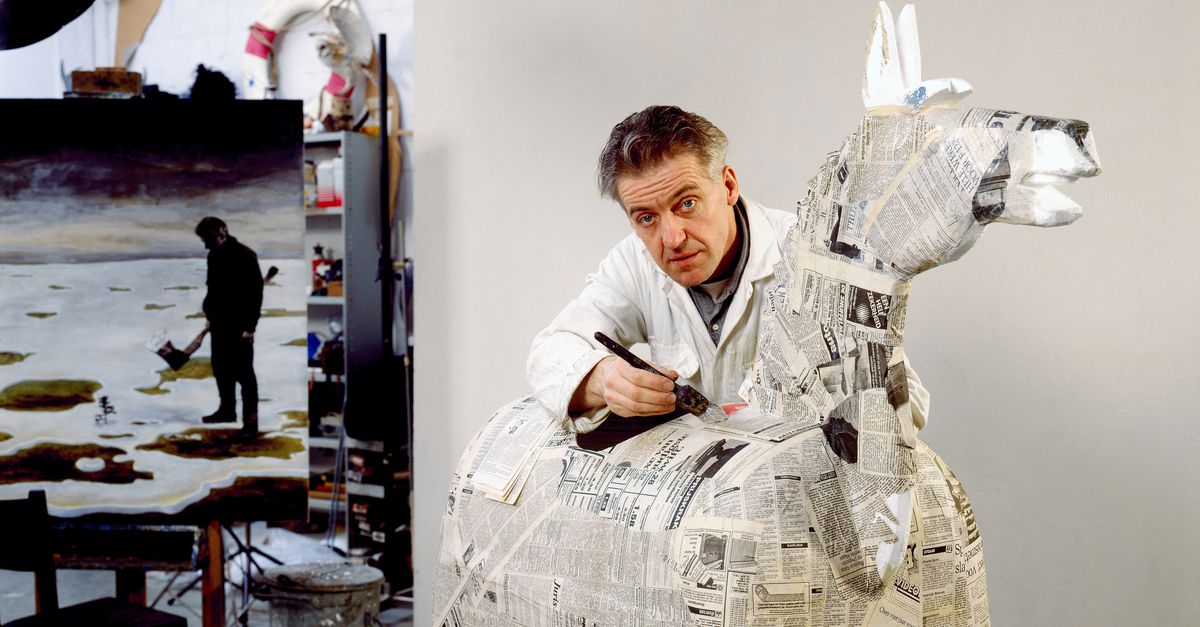 The Jacques Tati of the Dutch visual arts is dead: Teun Hocks passed away on Sunday after a long illness at the age of 74. His gallery owner, Mo van der Have of Torch Gallery, confirms this. The photographer, set builder and (performance) artist reached a wide audience, especially with his photo paintings. In this he himself acts as the main character in tragicomic situations.

Initially, the young Hocks, who was born in Leiden in 1947, had a traditional image of the artist. He built his first easel with a washing board, an old sled and a sports desk, after which he painted some flowers on pieces of cardboard. But thanks to his father, an amateur photographer, the love for photography arose. Father developed his photos in a darkened kitchen and also knew how to play tricks with them. For example, he had edited a family photo for the holidays so that the whole family was on fire to ring in the new year. In another the father had made a double portrait of himself.

This is without doubt the seed for many photographic ideas in Hocks’ work. He created a man who is sleeping in a bird’s nest. Or: next to a wheelbarrow with a heap of sand, the man with a shovel in his hand looks at the height of a few mountains a little further away, in a grassland he hangs like a played out Jan Klaassen from the puppet theater. Typical of all his work: the puppet show with two images, a smiling and a crying face.

His photo paintings sometimes referred to the influences of René Magritte. Hocks himself indicated that during his studies he was impressed by the work of the Belgian surrealist. But there is also an influence of film: where the images are reminiscent of surrealism, the staging often has something of the absurdist humor of Buster Keaton or Charlie Chaplin. Misunderstanding and amazement are turned into glee at a defenseless man in the midst of the world.

You can also see that attitude in his early performances. For example, there is a movie in which Hocks puts his legs and part of his back in the air: turn it around and you see a kind of hard-working Atlas. Or shadows, with which he makes animal figures with his hands behind a white cloth. What starts with the ordinary bunny that everyone has made for a child, degenerates into a deer with large antlers and a crocodile.

Hocks stopped performing because he preferred the quietness of his studio and also because he didn’t like the pressure of having to do something right at the moment. He could calmly build up, ponder and remodel his scenes for the black-and-white photos he took, and then let go of eight photos in which he assumed different poses. From there he could choose the best photo, develop and colorize it. They are in fact stills of a performance.

Hocks started coloring the photos in 1975. Five years before that, he had graduated from the St. Joost Academy in Breda, a place where he says he found a lot of inspiration. In the eighties his photos were classified as part of the genre of the photography buffa (aka staged photography). Together with other photographers, he ended up at Gallery Torch, the Amsterdam gallery that paid a lot of attention to photography. It benefited Hocks’ fame in the Netherlands.

Initially there was criticism when Hocks started coloring photos. He started with ecoline, later it became oil, which he carefully applied with a skewer and a cotton ball. Photographers felt that he violated reality in this way. Hocks himself said about this in an interview in The Green Amsterdammer in 2008: „Well, I am quite a bad painter. I also like a photo of a moonwalker much more than a painting of a moonwalker – it takes on reality value; that man has really been there. Besides, I’m having a lot of fun with the confusion I’m creating this way. Do you see them looking like this: is it a photo, or is it a painting?”

Humor in (visual) art often perishes fairly quickly and Hocks was therefore looked at with pity in the Netherlands for a while, his adaptations of photos were sometimes called ‘calendar art’. The realization that capturing humor, the comedy of failure, is just as difficult as capturing the heaviness of existence, was more appreciated in the United States than in the Netherlands.

Hocks looked back with some self-mockery; not only did he say in interviews that he was a rather bad painter, but he also often emphasized that he did not want to impose the story of the photo on anyone (hence his works were usually untitled) or described himself as a ‘picture viewer’. And: “I don’t want to be the kind of artist who thinks he’s indispensable. Stronger, the world can do without the photos of Teun Hocks† That may be, but Hocks’ way of looking, who sometimes gave the well-trodden paths some bumps, has made the world a bit more beautiful.

Billionaire Dietmar Hopp inspires with a million-dollar donation for Ukraine