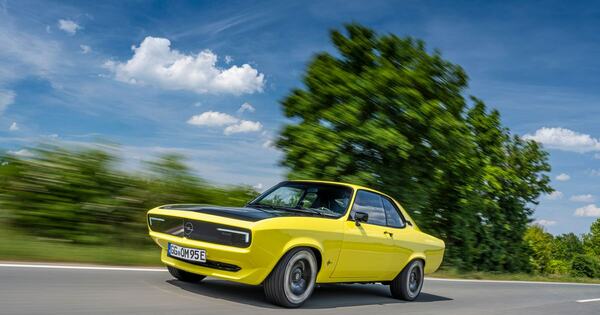 In the first place, a very clever way of Opel to publicize the new design language and for electric driving, and at the same time also highlighting the heritage. But this Manta GSe Elektromod (read: electrified and modernized) is fully operational, so we wanted to try it out.

Is that a difficult job, electrifying a classic car?

Not really in this case, because Opel had to take little into account; this Elektromod is for personal use, not for sale. The original 1.6 petrol was removed and a specialized subcontractor supplied the new electric motor and battery. The drive is still on the rear wheels, and the special thing here is that the four-speed manual just stayed in place.

Opel did work on a one-off type approval, so that this Manta GSe can also be used on the street. Witness the letter E on the number plate, in Germany every (PH)EV drives around with it.

The complete grille and lighting were removed and made way for a large black LED sign, which displays the brand logo and with angled LED strips on both sides, a reference to the new design language that the brand rolled out on the Mokka. The black nose even displays messages, like a marquee.

Furthermore, all the chrome ended up in the container park and the car received subtle black accents and a modernized logo at the back. The yellow paint and the black hood are also typical for the brand. During the test drive in the Rüsselsheim region, where everyone has a pinch of Opel in their blood, we already had a lot of attention with this piece of renovated heritage.

Inside we find OPC sports seats, a neatly integrated digital dashboard and beautiful details such as the ceiling covering in dark Alcantara or the Petri steering wheel.

Is that fun to drive, an oldtimer without a combustion engine?

It is, and that is largely due to the manual gearbox, which not only involves you more closely when driving, but also reduces the noise. The staccato humming of the gears is pleasant ersatz for the lack of engine hum. And above all: authentic ersatz. Fortunately, Opel’s have not fallen into the trap of the digital engine sound.

Disengagement only needs to be done when shifting gear, not when coming to a standstill, because the idle speed of an electric motor is 0 rpm. With 255 Nm there is indeed enough pulling power to let the gear change for what it is, but the proportions are such that you quickly bump into the limiter.

The integration is neat, this is not a rush job like some concept cars that rattle and creak at their snail’s pace. Obviously the stiffness isn’t that of a modern car, but it’s not that bad, and the (powerless) steering and chassis feel pretty tight.

The weight distribution has even improved, because the battery (31 kWh) is in the back. In combination with the grip of the modern Yokohama footwear (17 inches), you can take the bend with surprising strength. There is even a bit too much grip, a little extra mobility in the butt would not look out of place on this Manta.

Is it for sale?

Opel’s say they are inundated with questions about buying an electric Manta, and are considering a limited run. We would be very surprised, after all, there is a big difference between a one-off item for self-promotional use and series production. Just finding donor cars and offering them some quality guarantee seems impossible to us.

To make a long story short: no.

It is slightly more likely that Opel would release a conversion kit, although that is by no means a certainty. But if Opel doesn’t do it, then maybe someone else.

This Manta GSe Elektromod mainly illustrates that there is music in electric old-timers, it is technically feasible and if the correct adjustment is made, the conversion does not in the least destroy the driving pleasure. However, there are many practical objections between dream and deed, which means that unfortunately it will probably remain the first. Nevertheless: nice idea, who does what with it?