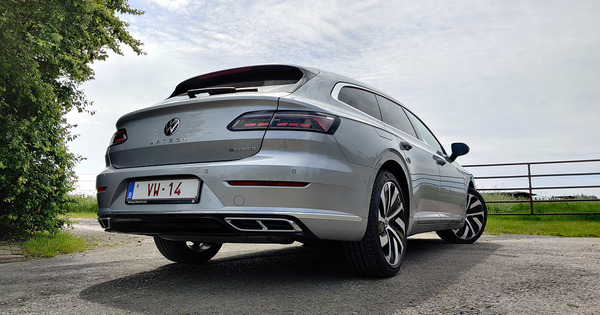 At the end of 2020, the Volkswagen Arteon passed the plastic surgeon for an invigorating facelift. Yet it was not the aesthetic retouches that aroused our interest, but the considerable expansion of the range. On the one hand, there is a new body variant, because you can now also get the renewed VW Arteon as a Shooting Brake. On the other hand, the range is expanded with two interesting motorisations, with the eHybrid, which is more relevant today, in addition to the sporty R.

The plug-in hybrid powertrain is that of the VW Passat GTE and combines a 1.4 liter turbo petrol with an 85 kW electric motor and a 13 kWh battery pack. The combined power peaks at 218 hp and maximum torque is 400 Nm, which is enough to accelerate the Volkswagen Arteon eHybrid from 0 to 100 km/h in less than 8 seconds and to give the Shooting Brake a top speed of over 220 km/h. to deliver. Perhaps more relevant: the CO2 emissions are 30 grams per 100 kilometers, the electric driving range is just under 60 kilometers and the average standard consumption is 1.3 liters per 100 kilometers.

Technically, the VW Arteon remains a somewhat slimmer, slightly less practical and somewhat premium-packed Passat. As a Shooting Brake, this Volkswagen looks even better, while there is more space for luggage. With the rear seats folded, the maximum load volume is 1,632 litres. We were able to test drive the VW Arteon eHybrid as R-Line, the trim level winking at the R version that combines sporty exterior and interior elements.

The body and interior of the renewed Volkswagen Arteon get a refreshed look. In addition to predictable changes to the light blocks and bumper shields, the new VW Arteon optionally comes with an illuminated LED strip in the radiator grille that connects both headlights. In this way, the entire front blends into a slim, striking and somewhat showy whole. Inside, the facelifted VW Arteon welcomes a modernized environment, with Digital Cockpit Pro and the MIB3 multimedia module as standard.

Initially, the VW Passat GTE was presented as an environmentally conscious sportsman, but now Volkswagen has adjusted that positioning. That explains why the PHEV version of the Volkswagen Arteon does not wear a GTE badge, but is called eHybrid. Now you will find a GTE button on the center console, a driving mode in which the electrical power is used to boost performance. The extra push is nice, but drains the batteries very quickly.

As long as the battery pack still has some power left, the plug-in hybrid drive unit of the Volkswagen Arteon eHybrid is smooth and comfortable. Only when the batteries are empty do you notice that the shifting transitions of the slightly older DSG-6 are somewhat wooden and that the 1.4 liter turbo petrol still lacks some content. The extra weight of the batteries is well tucked away, yet in the Comfort driving mode of the adaptive damping. In Sport, the chassis loses coherence and you notice that the VW Arteon eHybrid Shooting Brake does not have the dynamic possibilities of the non-plug-in hybrid engine variants.

The Volkswagen Arteon is and remains a VW Passat that plays on emotion, but as a Shooting Brake and eHybrid it now also throws rational arguments into the fray. It still looks slick, but now it has the necessary luggage space and a tax-efficient engine. Whether the surcharge of 3,500 euros compared to the VW Passat GTE Variant now makes it manageable, you have to decide for yourself.